This is the Way: The Mandalorian from Star Wars: The Credit Collection by Hasbro 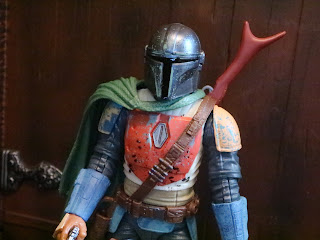 While IG-11 was the first figure I received in hand from Hasbro newest Black Series spin-off line, The Credit Collection, the Mandalorian himself was the first one I ordered. I actually preordered him back when he first went up on Amazon (shout out to my friend The Bear for the tip) and he arrived in the mail a week or so ago. If you're not familiar with The Credit Collection it's a line of repainted figures from The Mandalorian based on the concept art shown during the end credits of the show. Packaged on vintage Kenner styled cards with the concept art shown and a plastic Imperial Credit "prop replica" the line definitely is having some fun with the word credit. It's a pun alright. Do you wonder if Din Djarin ever tells Grogu dad-jokes while they're flying around? I do. Anyways, I think the Mandalorian himself is going to be the most popular figure in this line as not only is he incredible looking on his own but he also kind of looks like Boba Fett from the Star Wars Holiday Special. That's pretty fitting since Mando's Amban rifle is based on Boba Fett's rifle from his first appearance. Anyways, this figure is a repaint but it's a darn good one. Plus, the Mandalorian released on Triple Force Friday 2019 has been a pretty tough figure to find. I didn't get mine until the end of October of this year! Let's take a look at The Mandalorian from The Credit Collection after the break... 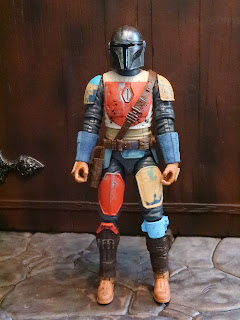 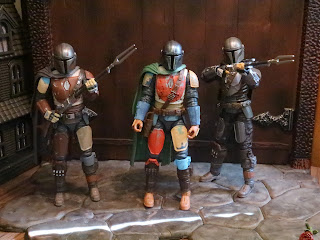 Comparison:
* I've got a line-up of Din Djarins here, starting with last year's Phase III the Mandalorian on the left, the Credit Collection Mandalorian I'm reviewing today in the center, and the recent Phase IV version of the Mandalorian on the right. The Credit Collection Mando is a straight up repaint of the Phase III figure, who I actually never reviewed on here. He does share a lot of parts with the Phase IV version as well, though. 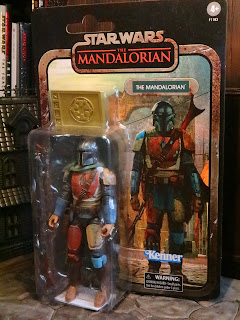 The Packaging:
* The packaging is quite nice and if someone were inclined to keep these carded I couldn't say I'd blame them. They're on a vintage Kenner styled card, like the 40th Anniversary figures, but rather than a picture from The Mandalorian TV series you get a concept art image that was shown at the end of one of the episodes. This is some slick presentation and it's really, really cool to see The Mandalorian title in the box at the top under the Star Wars logo. The image looks fantastic and matches the figure very well. 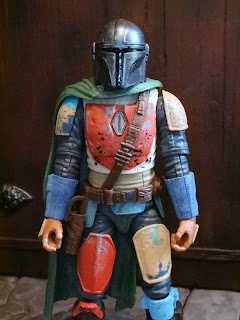 The Positives:
* The Mandalorian is an incredible looking figure made all the more eye catching by the unique color scheme designed to capture the concept artwork. The splashes of red, blue, and yellow really highlight the different armor pieces Mando's wearing, making his costume seem even more complex than it actually is. I love the gritty looking splatter on the armor, too. It's quite interesting and while it still could look like an "in-universe" Mandalorian with lots of wear and tear it also nicely replicates the style of the art. 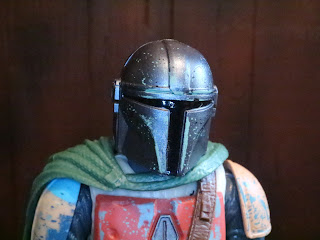 * Din Djarin's helmet is the same as you'd expect from the previous releases although it has an interesting green splatter on it. Whether you take this as battle damage, grime from combat in a hostile environment, or the fluids of some creature Mando has recently had to fight off, it sure does add some extra character to the sculpt. It really does set this release apart from the previous ones. 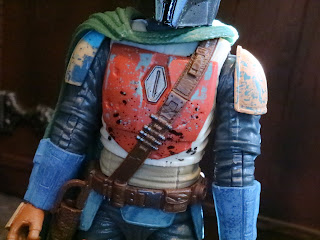 * Here's a closer look at Mando's chest armor so you can see the paint detail on it. You can also see his very cool bandolier, carrying some extra ammo and other useful gear. 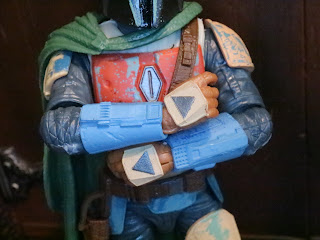 * Mando's vambraces are pretty cool, too. The detail is there although not every little aspect of the weaponry on them is painted. Still, they're cool and look awesome. So do the gloves, too. Those are quite slick. 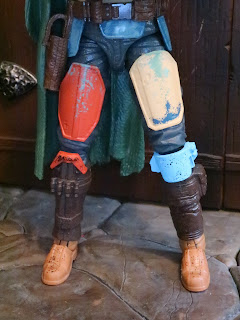 * The armor on Din Djarin's legs is quite detailed too with multiple armored plates and lots of straps and such. The weathering on the plates is just excellent. 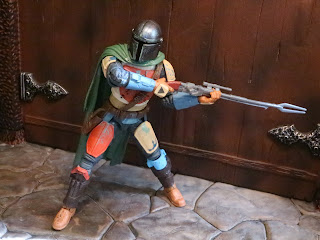 * The Mandalorian has excellent articulation, just like nearly every other figure Hasbro has released since they really improved the line in 2018. The articulation is smooth, plentiful, and Mando can hold all of his weapons appropriately, including holding his rifle with both hands. He's very fun to mess around with and looks excellent in almost every pose you could think of. 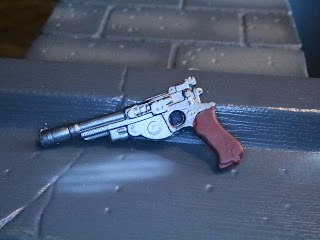 * Mando come with both of his blasters. First up is his very cool Western styled blaster. The pistol grip is lighter than the standard versions, more of a reddish brown, really. 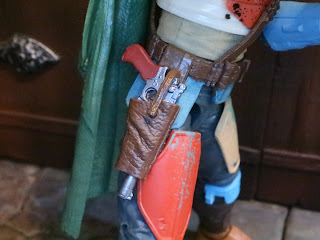 * The functional holster on Din Djarin's right hip holds the blaster pistol securely in place for those times when he needs to reach out and zap someone. 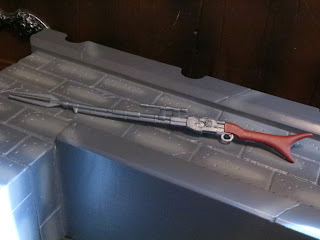 * Most importantly, Mando comes with his Amban phase-pulse blaster. This is such a wicked rifle and it's capable of disintegration when needed. Oh, and you can use the front ends as a melee weapon. This thing is so flipping cool! 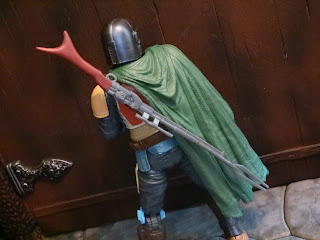 * The peg on the Amban rifle fits through a hole in the bandolier and can plug into a port in the Mandalorian's back, allowing him to carry it hanging just over his shoulder. 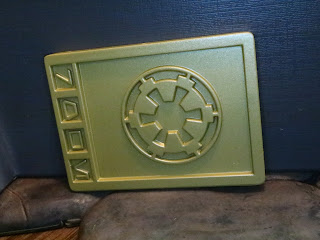 * Since this is The Credit Collection each figure comes with an Imperial Credit. You can see them stacked on a table in the show at one point, so they're definitely there and available in multiple colors.. It looks like they're pretty accurately sized. The Credit is a simple plastic piece meant to be sort of a prop replica rather than an accessory intended for use with the figure. Across the side of the credit you can see the Aurebesh characters that spell out ROWE. What's that mean? I can't find an answer anywhere! 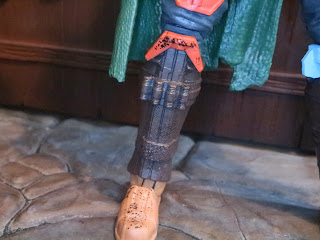 The Negatives:
* While the paintjob on this version of the Mandalorian is meant to evoke the look of the concept art from the television show I do wish that little details such as the cylinders on Mando's boots had received a paint hit. They look kind of weird without one. 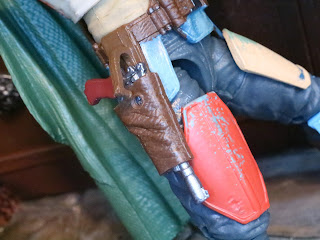 * The strap that holds Mando's blaster in place is a bit of a pain to plug in. 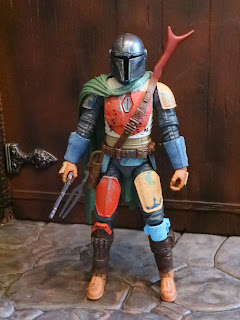 Not everyone is going to be thrilled with The Credit Collection as it's a line of repaints that carries with it the $5 exclusive tax all of Hasbro's retail exclusive Black Series figures seem to carry, but I still think that this version of the Mandalorian is as good as the original release. heck, with the incredibly cool colors chosen here he might even be a bit more exciting. I'm all about some Mandalorians and Din Djarin is without a doubt one of the coolest there is. Honestly, this is a pretty Epic figure and he might just be one of my favorites of the year. While we're probably only getting this line of repaints because Hasbro wasn't prepared for the popularity of The Mandalorian and needed to get as much product out as possible I think they definitely add something cool to the Black Series. As an Amazon exclusive this guy could pop in and out of stock, so keep checking for him. He's a worthwhile purchase.
Who isn't a fan of Din Djarin, AKA the Mandalorian? Check out my review of the Black Series Phase IV The Mandalorian.
For more figures from Star Wars: The Credit Collection check out the following:
IG-11