This is the Way: Princess Leia Organa (Endor) from Star Wars: The Black Series Phase IV by Hasbro 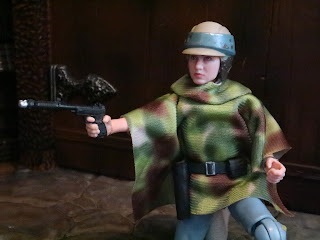 Today's the third review in this trifecta of reviews looking at the heroes of the Rebellion during their mission to the forest moon of Endor and today I'm checking out Princess Leia Organa in her combat poncho. Hasbro really did some impressive work with Han Solo and Luke Skywalker in their Endor gear but Princess Leia might be the best figure of the group. Like her two companions, Leia was part of the Heroes of the Endor set sold through Hasbro Pulse earlier this fall (it was originally intended to be the SDCC 2020 exclusive) but Hasbro repacked her in the newest lineup of the Black Series Phase IV figures as well. I remember ordering my vintage Princess Leia in combat poncho figure over the telephone back in early 1996 through an add in the back of a copy of Lee's Action Figure News and Toy review. She was quite inexpensive but listed as loose with no accessories. I was quite young and assumed that meant she wouldn't come with her blaster but I was a bit surprised when she didn't come with her combat poncho, either. Still, I was glad to have her as the POTF2 version (with a Speeder Bike) didn't come out until the middle of 1997. It's amazing how Star Wars action figures have improved over the years, isn't it? I wasn't around for the true vintage line but I'm still amazed by the difference in what we're getting today compared to the POTF2 figures I had growing up. Let's take a look at and see progress in action with this amazing Princess Leia figure after the break... 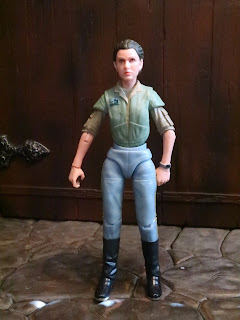 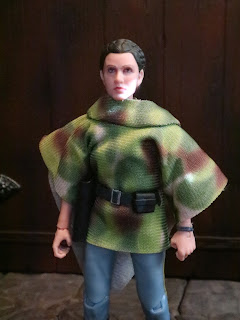 * All of the main three in their Endor gear have been really impressing and Princess Leia certainly doesn't ruin the streak. She's a completely new figure with no reused parts that I'm aware of and I think she's the best looking figure of the three. Granted, Princess Leia is always the best looking of any group she's in, am I right? She looks downright awesome in her combat poncho, though. It fits perfectly and looks excellent. The layering on these figures is really nice as the poncho over her main outfit and kept in place with an actual belt is such a good look. 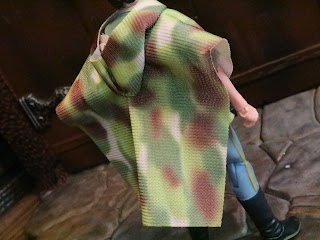 * Hasbro has been doing an excellent job with soft goods. They don't do many soft goods in the Black Series but when they have lately the results have been excellent. Leia's poncho is made from a durable fabric and it's well tailored. The camo pattern is really nice looking. It looks very close to the movie prop's camouflage pattern to my eyes. 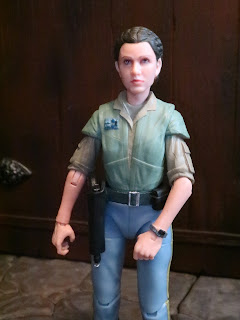 * The belt and poncho are easily removable, allowing you to have Leia in her military fatigues. This is fantastic as you get another separate look for the figure! Once we get an Ewok village Leia we'll have all of her looks from Return of the Jedi in the Black Series! The detail in this costume is very good with lots of different colors and textures. You will have to use the belt, though, as it's designed to hide the ball jointed waist. 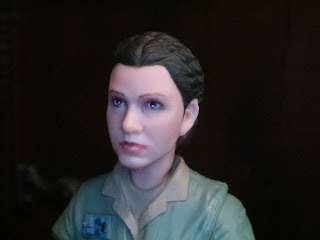 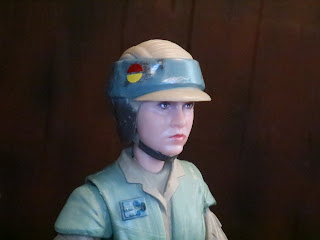 * Like her twin brother Luke, Leia also comes with a removable combat helmet. It's an excellent sculpt with some intricate paint work and it fits the figure perfectly. Seriously, it looks incredible on Leia. Not at all oversized or ill-fitting! 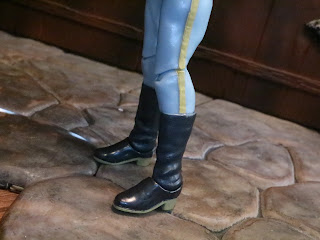 * Leia's also wearing some might cool boots. The soles are a different color and the stripe on her pants legs looks quite nice, adding a splash of light color to the earth tones of her outfit. 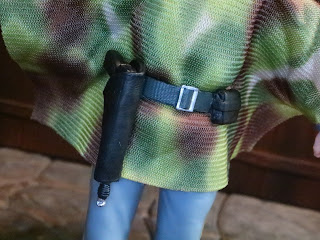 * Leia's belt is removable and features a few small pouches and a functional holster for her blaster pistol. 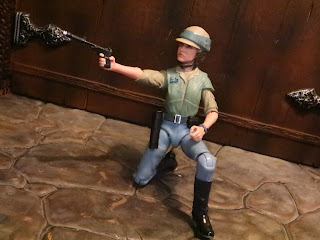 * Leia uses the newer articulation scheme for the Black Series figures which includes pegless knee joints with a wider range of motion and some excellent elbow joints. She doesn't have butterfly shoulders but the interior peg of her swivel/hinge shoulder joint does have a bit of give, allowing for slightly more mobility. Between The Black Series, the G.I. Joe: Classified Series, and Marvel Legends, Hasbro is currently producing the most well articulated and durable action figures at the most competitive price on the market. 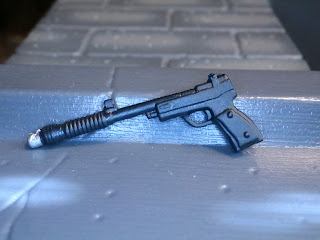 * Leia comes with a Defender Sporting Blaster pistol which is apparently known as Satine's Lament by the company that produced it, the Drearian Defense Conglomerate. It's an excellent sculpt and fits the figure well.

* This is the right pistol for Leia in A New Hope, but not the right pistol for her when she was on Endor. There, she carried an X-30 "Lancer" sporting blaster. Interestingly, Kenner got this right as the vintage figure came with the correct shorter blaster (during the POTF2 years she got a DL-44 like nearly everyone else). 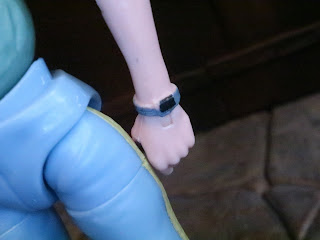 * Leia's wrist communicator is a cool detail but the paint application is half missing. Botch! 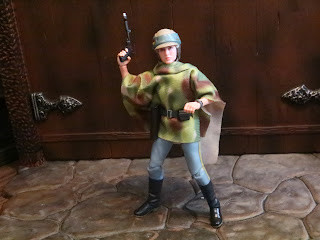 Out of the Endor trio, I'm giving Leia the gold medal as she is Epic. A completely new figure, she manages to bring the most new stuff to the table, easily allowing you to create every look for Princess Leia while wearing this outfit. While the absence of the correct blaster is an oversight for sure, it's not the worst thing that could have happened. The likeness is pretty amazing. Hasbro has delivered some spectacular Princess Leia figures in the Black Series and this one is one of the best. Now... where's Lando in his outfit from the assault on the Death Star II? That's easily his best look in the whole saga!