This is the Way: Incinerator Trooper from Star Wars: The Black Series Phase IV by Hasbro 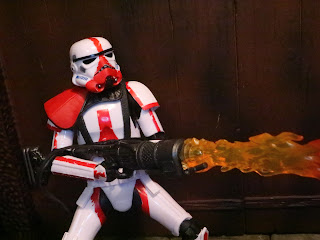 It's Friday which means we've got a new episode of The Mandalorian! To celebrate, let's check out another review of a figure from the show! The Incinerator Stormtroopers first appeared in The Force Unleashed and since then we've seen quite a few different Stormtroopers, Clones, and First Order Stormtroopers wielding flamethrowers. The Imperial Incinerator Troopers really made a splash, though, during their first canon appearance in Chapter Eight of The Mandalorian when, under the command of Moff Gideon, they attempted to burn Din Djarin, Grogu, and the rest of the crew out of the cantina on Nevarro. These guys might be hot stuff but they were no match for Baby Yoda (it's going to be really tough to stop calling Grogu that, isn't it?)! Hasbro seems to be trying to get quite a bit of Mandalorian product in The Black Series and this guy is part of the newest Phase IV series which also includes The Armorer. Furthermore, the Incinerator Trooper uses the new Stormtrooper design that was released for Phase IV. The articulation is much nicer and the way the armor covers the body is far more realistic. Ready to light things up with the Incinerator Trooper? Then join me after the break... 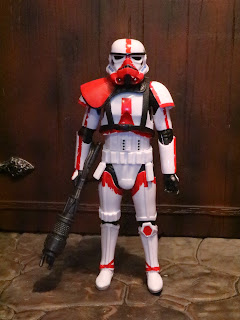 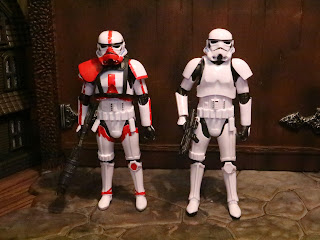 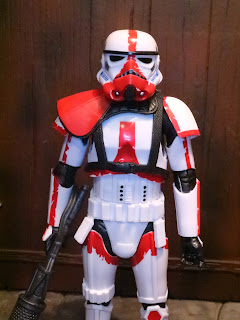 The Positives:
* The Incinerator Trooper looks quite cool. The chipped red highlights look amazing on the standard Stormtrooper body, really bringing a nice, new visual flare to a familiar outfit. The shoulder pauldron also helps these guys stand out a bit, bringing to mind the aforementioned Sandtroopers and some other specialized Imperial Stormtrooper. 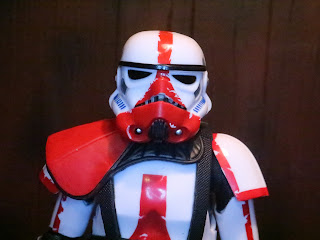 * The paint on the helmet is really nice. This guy looks terrifying! This is easily one of the best Stormtrooper repaints we've seen, too. I like the new helmet sculpt. It just seems crisper and cleaner with a better shape than the previous Stormtroopers. It's nice to see Hasbro improve the basic bucket head after all this time. 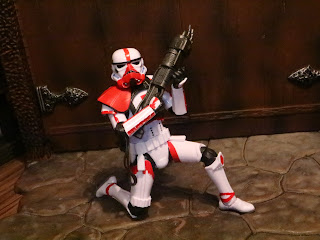 * The new Phase IV Stormtrooper gets rid of the double hinged knees and elbows but since the range of motion on the new knees and elbows is so much better you won't miss them. The plastic is sturdy and now at all rubbery. The articulation on the head and neck are incredible as are the "butterfly" shoulder joints. This guy looks amazing holding his flamethrower in multiple different poses! He's really, really fun. 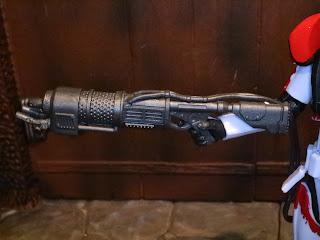 * The flamethrower is pretty cool. It has an old-school, vaguely World War 2 feel that so many of the Original Trilogy weapons have but it also looks just a bit more "spacey" than a real flamethrower. The Incinerator Trooper can hold it quite securely as well, which makes it all the better. 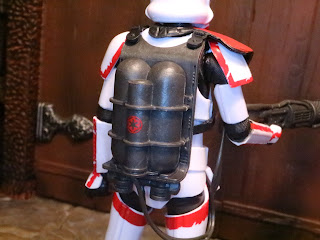 * The Incinerator Trooper has a backpack holding the armored tanks of whatever he's using. They look suitably industrial and Imperial, complete with an Imperial cog emblazoned on the central tank which is usually the pressure tank on a real flamethrower. 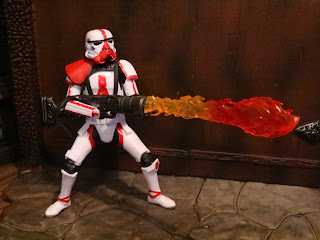 * And what comes out of a flamethrower? Why flames, of course! The Incinerator Trooper comes with a really cool stream of fire effect that can be placed on the end of the flamethrower. It stays on quite securely and looks pretty impressive. This accessory takes a good figure and turns it into a great figure in my book! 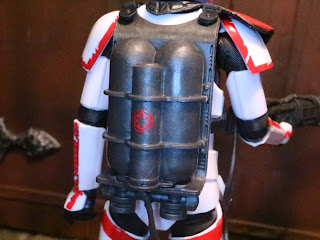 The Negatives:
* Hasbro messed up and put the tanks on upside down The knobs and cord are supposed to come out of the top of the tanks, not the bottom. That's a weird error, and one Hot Toys managed to avoid, so I wonder why Hasbro botched it? 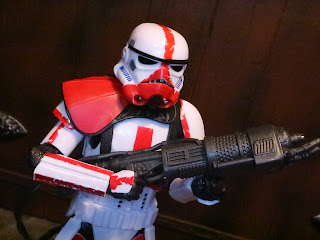 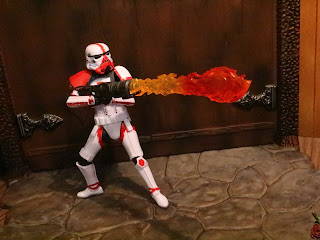 The Incinerator Trooper is really a pretty slick trooper. I do wish the backpack and such were removable (and the tanks added on correctly) but still, it's a pretty impressive Black Series figure. Not one of the best  of the year or anything but still worth tracking down. I'd give him a Good and 1/2. He's not a must have but he's still an exceptionally fun figure, particularly due to the flame attachment for the flamethrower. So far Phase IV of the Black Series has really delivered and I'm excited to see where Hasbro continues to take the line.
This is the only Incinerator Trooper I've reviewed on the site. For more figures from Star Wars: The Black Series Phase IV check out the following:
Admiral Ackbar
The Armorer
Cad Bane
Garazeb "Zeb" Orrelios
The Mandalorian