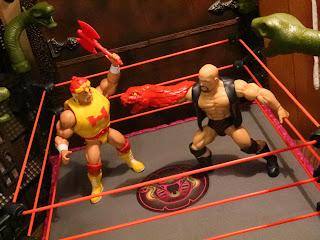 It's been almost one year since I reviewed the Grayskull Mania set from Mattel's Masters of the Universe and WWE mash-up toyline, Masters of the WWE Universe, and it's pretty impressive what the line has managed to do. Presumably a Walmart exclusive through the end of this year (as some e-tailers are starting to put up preorders for the product for release in 2021) this line seems to have done quite well and it keeps going with more new releases. It seems to be a steady seller and you'll rarely find these figures warming pegs. I've recently found a few of the series 4 figures (reviews coming soon!) but I wanted to kick thing off with the Rattlesnake Mountain Ring set which includes a Snake Mountain themed wrestling ring and two of the biggest stars the WWF/WWE has ever produced: Hulk Hogan and Stone Cold Steve Austin. That's a heck of a selling point for this set, isn't it? I promise you that a review of the Masters of the Universe Snake Mountain is coming (consider it the main event of 2020) but, for now, let's say our prayers, take our vitamins, and get ready for the Rattlesnake Mountain Ring. (What?!)
After the break.... (What?!) 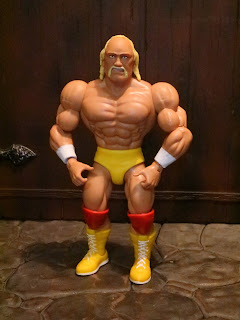 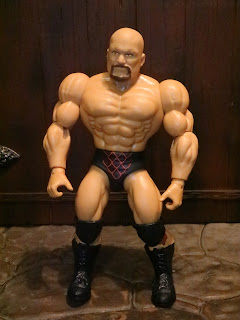 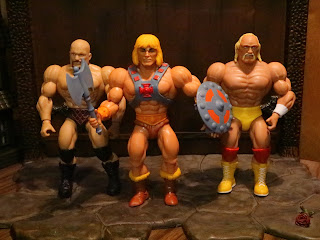 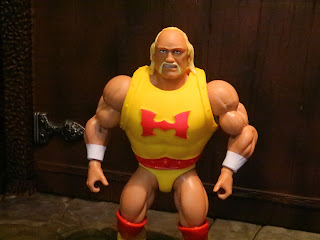 The Positives:
* Let's start with Hulk Hogan, the man who is arguably the most well known professional wrestler in the world. The Hulkster is the hero in this set and he's decked out in what looks like a version of He-Man's Battle Armor. It's got the stylized H on it, though that could stand for Hulk, too, couldn't it? The battle armor looks pretty cool in Hulk's signature colors and it made from a rubbery material so it's easy to take off when Hulk needs to Hulk up. 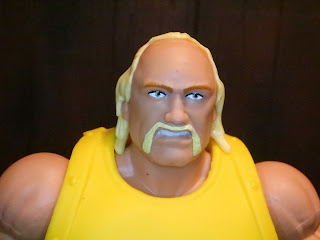 * This headsculpt definitely represents a younger Hulk Hogan which tends to be a trend for this line. We're definitely getting the older WWE Superstars in their absolute prime with most releases which is pretty cool. Anyways, this isn't a bad headsculpt at all. It's got Hulk's iconic blonde mustache with an intense look on his face. 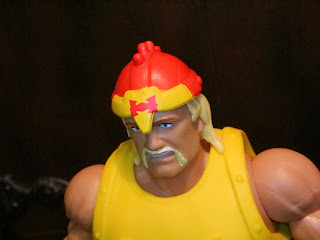 * To complement his battle armor the Hulkster is also wearing an armored helmet on top of his head that's also adorned with the stylized "H" logo. It kind of reminds me of Vykron's helmet! It actually stays on Hulk's head much better than I thought it would. 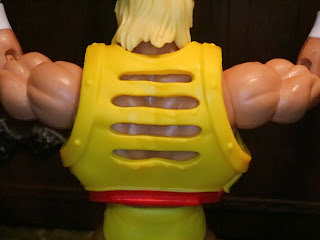 * Check the back of Hulk's armor! It has the rips in it just like Hulk's t-shirts! That's a fun little detail for sure. 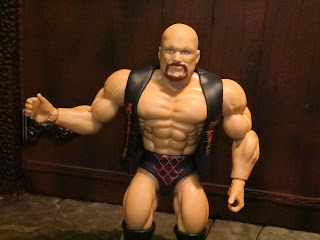 * Stone Cold Steve Austin is a pretty basic looking figure which is a little disappointing. He's wearing all black (which makes sense) with some red scales painted on his trunks. Other than that, he's just a MOTU proportioned Stone Cold. Not bad, just not as exciting as some of the other stuff we've seen in the line. 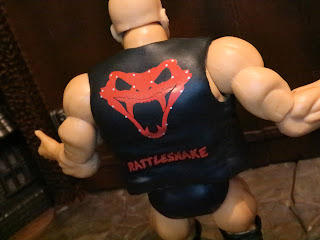 * The removable vest is a nice touch, though, and it has a lot of printed designs on it, most significantly the large rattlesnake logo on the back. 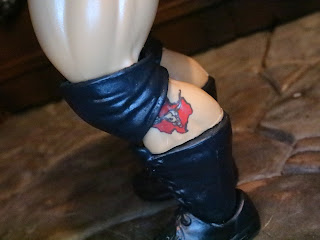 * Underneath his kneepads you can see Stone Cold's tattoo of the state of Texas. Does WWEternia have a Texas? Apparently. 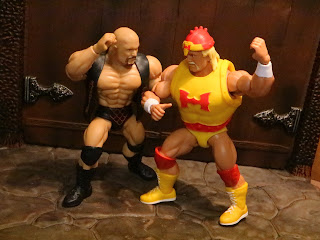 *   These guys are all built on the body Mattel is using for Masters of the Universe Origins, which works really well and has solid articulation. They're really fun to mess around with and do a pretty good job of attaining basic wrestling poses. they remind me a lot of a vintage toy in that they're extremely playable and toyetic.
* Of course, like the rest of the figures in the line, they're also completely modular, allowing you to mix and match parts. 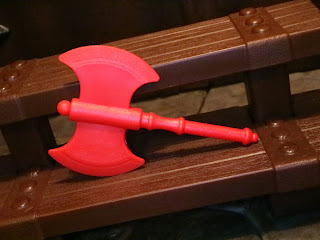 * Hulk Hogan comes with He-Man's ax cast in red. It's a pretty cool looking weapon (I think it's dubbed the Atomic Ax or something) and a fitting armament for a real American like the Hulkster. 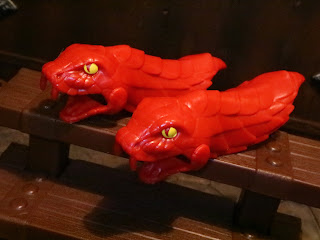 * Stone Cold comes with two gauntlets that look like giant snakes! These really feel like something a vintage member of the Snake Men might have carried, don't they? They have opening lower jaws and fearsome yellow and red eyes and they look absolutely ridiculous in the best way possible, kind of like Snake Crush Skeletor. 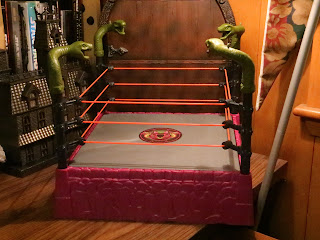 * If you have the Grayskull Mania set or just the standalone ring then you should be pretty familiar with what you're getting: A 13" by 13" inch wrestling ring with sides sculpted to look like plastic rock walls. To tie this in with the Snake Mountain theme the ring is the distinctive purple color of Snake Mountain. It also has three ropes around the edges which are made from orange rubber. 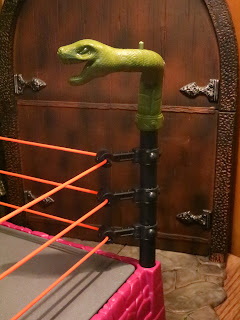 * My favorite feature of the ring is the giant snake that adorns each ring post! Looking very similar to the vintage Snake Mountain toy, a large green snake sits high atop the post, allowing the warriors of WWEternia to throw combatants into them or climb them for some high flying aerial action. 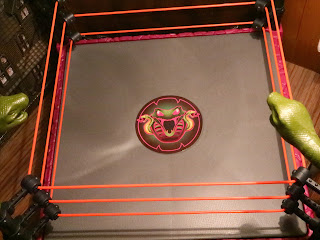 * The ring mat is plastic and is adorned with a snake logo in the middle. It's also "springy" meaning that you can make it bounce up and down a bit, kind of like a real wrestling ring. 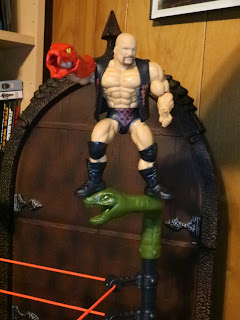 * It's actually pretty cool that the four ring post snakes have pegs on them, allowing you to place the figures on top of them! You'll have to blance the figures properly but you can do some cool stuff here and I'm sure kids would eat this kind of thing up. 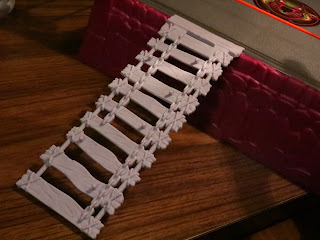 * While Grayskull Mania came with some wooden steps into the ring (which I use in so any reviews now) Rattlesnake Mountain has a ramp that attaches to the edge of the ring. It looks like the bridge from Snake Mountain, so that's pretty cool. It also had pegs on it, allowing the figures be posed on the ramp. 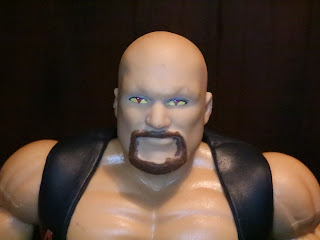 The Negatives:
* I'm really not feeling this Stone Cold Steve Austin portrait. It looks... kind of off, to me. The paint on his facial hair is rather messy and while the snake eyes are cool the rest of the headsculpt just seems off to me. I can't quite put a finger on it, though. 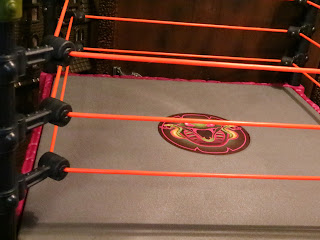 * While Grayskull Mania had the cool nylon covered elastic ropes that most of Mattel's WWE rings use, this one has simple rubber rings. I like the bright orange color but the ropes themselves just don't feel like they're of the same quality as the previous ropes. They're not flimsy or anything; they're just not as nice. 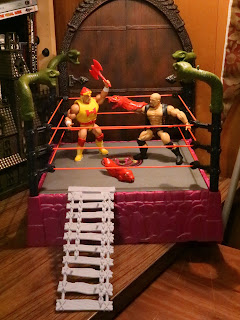 Hulk Hogan is an excellent figure, Stone Cold's not the most exciting or MOTU inspired, but he's still OK, and the Rattlesnake Mountain Ring is actually quite a bit more exciting than the Grayskull Mania set. The Grayskull Mania set was sold as a very discounted price, though, although sometimes that happens early in the line to drum up more interest and get these into the hands of consumers. Break down the prices for this and you're paying $15 per figure and $20 for the ring which is right in line with what you'd usually expect to pay for those items individually at retail. There have been some sales on the item recently, so that would make the set even a better deal. I'm giving this set a Great rating as well. I really like this line and I'm glad Mattel's doing something that's so kid friendly while also offering lots of cool stuff for us cursty old MOTU fans. Considering Hulk Hogan and Stone Cold Steve Austin are two of the biggest names in wrestling with no variants of these figures yet announced and this should prove to be a stronger seller than last year's Grayskull Mania.
Are you a Hulkamaniac? Then check out my review of the WWE Elite Series 34 Hulk Hogan.
Are you a fan of Snake Mountain? The check out my reviews of the Snake Mountain M.U.S.C.L.E. from series 3's Pack C and the plastic Snake Mountain cases from the series 2 Eternia Minis Stinkor, Faker, He-Man, First Appearance Trap Jaw, Serpent Claw Man-At-Arms, Golden Armor Skeletor, Skeletor, and Beast Man.
If you're looking for more Stone Cold Steve Austin reviews, check out the Elite Collection Hall of Fame Stone Cold Steve Austin and the WWE Zombies Stone Cold Steve Austin.