Toy Review: Panthor at Point Dread from Masters of the Universe by Mega Construx 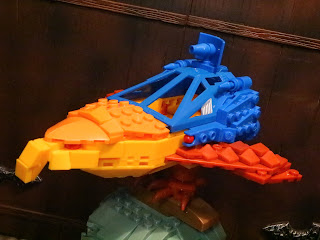 While it's not as large as last year's Castle Grayskull 2020's largest set, Panthor at Point Dread, is still pretty substantial. With 557 pieces the set includes three figures, Panthor, the Talon Fighter, and Point Dread. Just like in the vintage line and in Masters of the Universe Classics Point Dread can attach onto the top of Castle Grayskull, making an already quite large playset even bigger! There haven't been too many new Mega Construx releases this year so far (there were some new minifigures back in January/ February) but in the last month or so there have been a few more to capture collector attention again. I found this set at a Walmart earlier this month and just got around to building it over the past week. It's quite cool with a neat mixture of included items, most of which have their roots in the vintage MOTU line. Let's take a look at Panthor at Point Dread after the break.... 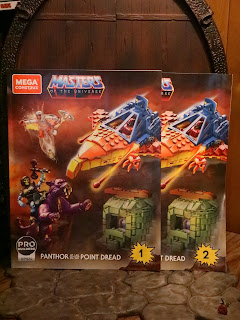 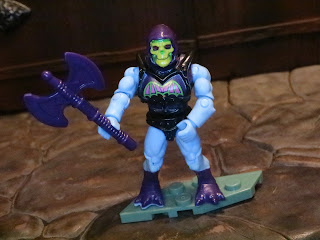 * The first figure we'll look at is Battle Armor Skeletor. The Mega Construx line has had quite a few Skeletor figures in it but this is the first Battle Armor version of Skeletor. His armor looks fantastic as the paint apps are really impressive for a figure this small. I love the purple ax, too. Of course, he also comes with a stand piece to help keep him upright or in battle poses. 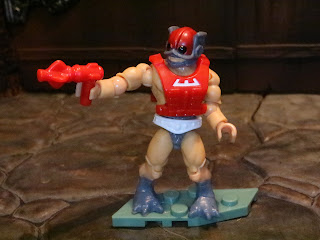 * Zodac is brand new to the Mega Construx line! I love Zodac and it's cool to see him get some attention. He's definitely the character from the original series that seems to get neglected the most. His pistol looks awesome in red and I'm loving his armor, too. He's easily my favorite figure in the set. 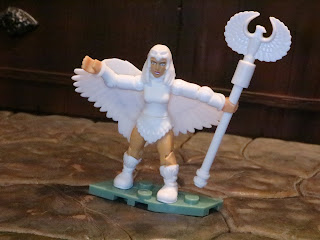 * The third minifigure is the Sorceress from the minicomic "Temple of Darkness!" in which she wears an all white outfit. The Sorceress was an exclusive figure with Castle Grayskull so it's nice that folks not wanting to purchase such a large set have a change at her. I like everything except her torso, which looks odd in just white. She really needed some feathers or something painted on to help break up the all white look. 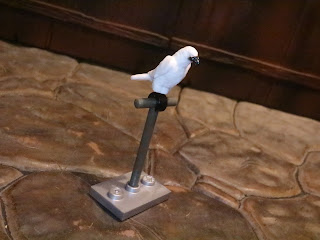 * A standard version of Zoar was included in Castle Grayskull but here we get Zoar in white to match the Sorceress' color scheme. I'm really liking the perch here. That silver is so classy! 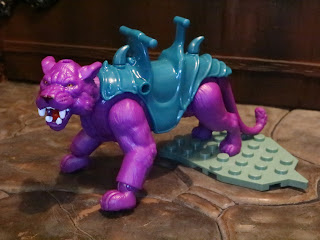 * Panthor is (appropriately) a repaint of Battle Cat from the Battle Cat vs. Roton set. Panthor has quite a bit of articulation and while I still don't like the awkward looking neck joint, I love everything else about Panthor. His purple color just pops, doesn't it? He's a seriously nice mini! 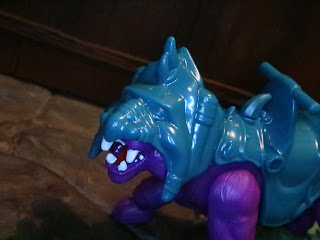 * Panthor comes with something really cool and quite unexpected: A helmet! While the vintage Panthor didn't have a helmet he was given one in the MOTUC release. That helmet was unique from Battle Cat's though, while this one is just Battle Cat's molded in the greenish color of Panthor's saddle. I really like it! It's a fun accessory and while I probably won't use it in my display it's fun to play around with when taking pictures. 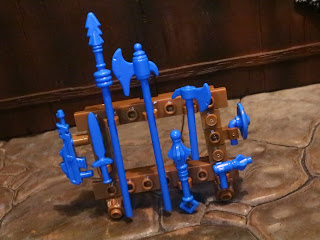 * The weapons rack is very similar to the one that came with the Castle Grayskull except you now get multiple weapons redone in blue and the rack itself is brown. Getting eight minifigure accessories here is very cool. 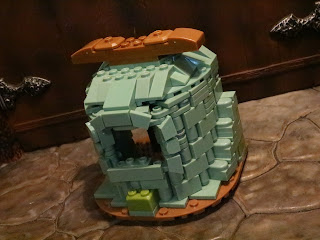 * Alas, we can start talking about Point Dread! I never had the Talon Fighter as a kid but I did have Point Dread. My Castle Grayskull was purchased at a yard sale second hand and Point Dread came with it. This mystical outpost's brickwork matches Castle Grayskull. The build is very intricate with lots of pieces used rather than larger pre-made walls. 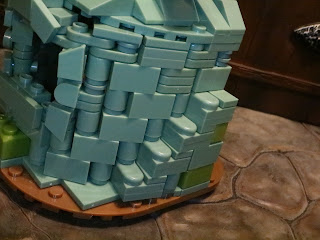 * There are some little stairs built into the side of Point Dread to allow the Heroic Warriors to climb to the top to board the Talon Fighter. I'm quite impressed by how many individual pieces this build uses. The Mega Construx team really uses lots of smaller pieces to craft some elaborate architecture features. 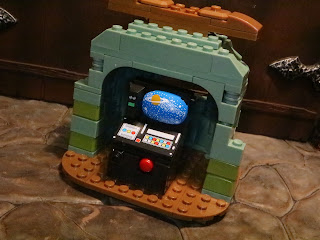 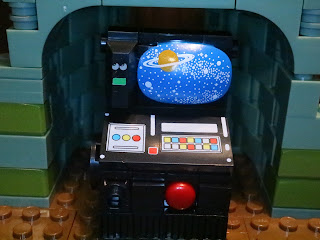 * The computer terminal is pretty cool up close. The view screen, keyboards, and other little devices are all printed bricks. There's a lot of detail here and the computer console itself is a neat little build. 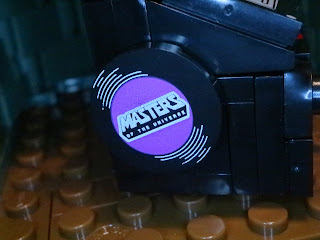 * This set has a cool Easter egg: There's a record-like device on the side that says "Masters of the Universe." This is a reference to the vintage toy which included a 7-inch 45 rpm record and book. 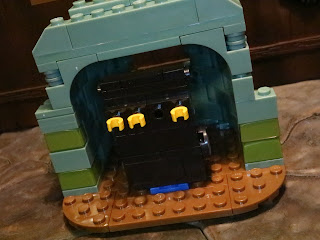 * The computer console of Point Dread can rotate to reveal a wall of....empty hooks? I'm assuming the intention is that you can store weapons here, or maybe even He-Man's gear as a reference to the original vintage minicomic where the Green Goddess gives He-Man the gear hidden inside of a cave. Why don't the instructions add anything cool here or show off anything? It makes a cool feature seem a bit half-baked, really. 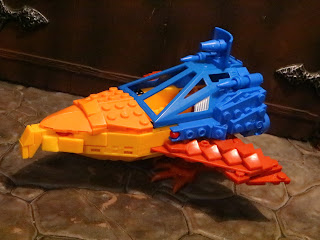 * The Talon fighter is a quite fun smaller vehicle to build, especially because of the multiple colors used. The colors and design look very similar to the vintage toy which is a great thing. It's amazing how close to the vintage toys Mega Construx is able to get these builds. 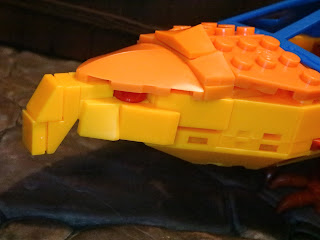 * The front of the Talon Fighter looks like a bird of prey. That's a pretty nice design, especially considering that it's mostly built of small pieces. The little red eyes are quite cool, too. They're tiny studs inset into the build. 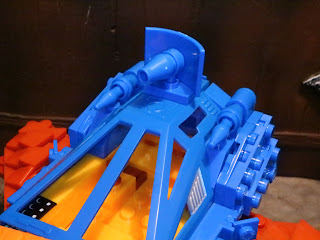 * The Talon Fighter's cockpit is a unique piece with silver grates on the sides. On top is a rotating radar dish and some other interesting features. Maybe they're some sort of laser? 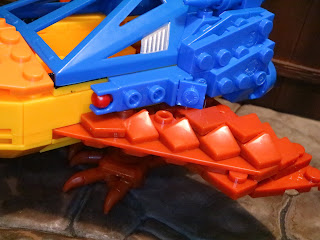 * The wings use these cool little slanted pieces that really look like feathers. How cool! You can also see the very cool feet of the talon fighter here. 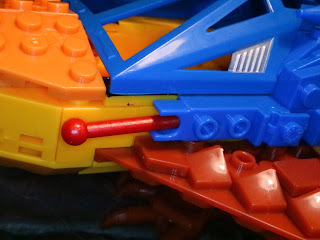 * Holy smokes! The missile launchers on the side of this thing really shoot! They're tiny little missiles but I've rarely seen something shoot this far with this much power! 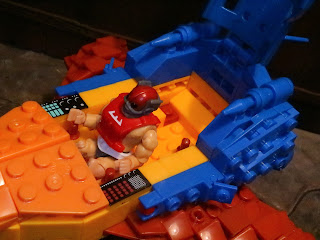 * The cockpit opens up to hold two figures inside, just like the vintage toy. There are control sticks on each side for the figures to grip as well as printed control panels on the left and right sides of the pilot's seat. 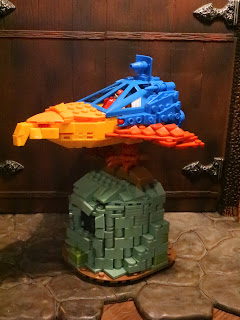 * The feet of the Talon Fighter easily snap onto the perch sitting atop Point Dread, allowing it to rest on the mysterious outpost until needed. It stays on there quite securely and looks really cool. It is kind of weird that the perch doesn't rotate like the vintage toy. Maybe Mega Construx was concerned that it would throw off the balance of the set when it was perched atop Castle Grayskull? 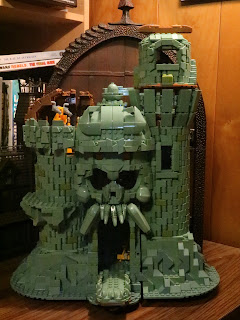 * And, finally, here's a shot of Point Dread on top of Castle Grayskull. It's a cool feature and it works quite well. There are some extra pieces which you use to build three columns on the highest tower which can attach to the bottom of the Point Dread base. The columns allow Point Dread to be easily attached and detached as well, so it's easy to use it as a mobile outpost as shown in the vintage stories. 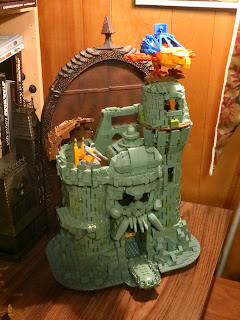 * And here's a shot with both Point Dread and the Talon Fighter on top of Castle Grayskull. 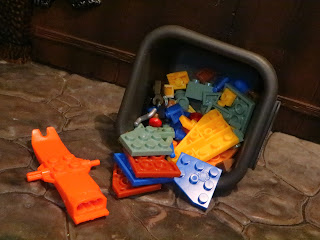 * The Mega Construx building sets always come with a ton of extra parts! Oh, and a building tool that can be pretty handy. 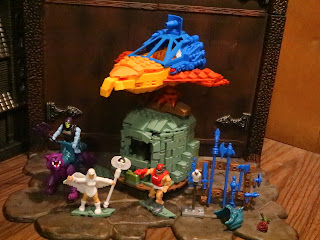 For $50 bucks you're getting a decent amount of stuff here. A small playset, a medium sized vehicle, Panthor, the weapons rack, and three minifigures. The price per piece is on par with Lego and actually a bit cheaper, so you're getting a better value. With quite a few cool pieces, some great minis, and the best vehicle in the line yet, this is a Great and a 1/2 set. Breaking the price down by the number of items you get I definitely think this one is a real winner. Mega Construx definitely is doing a great job with MOTU and I'm excited to see what they offer up next year.

If you're a Panthor fan I've also checked out the M.U.S.C.L.E. version of Panthor, the ReAction Skeletor and Panthor, the Dorbz Ridez Skeletor with Panthor, and Panthor and Panthor (flocked) from MOTU Action Vinyls.
I've reviewed so many toys based on Skeletor/ Keldor that I've given him his own review archive. Check out Snake Mountain for a plethora of Skeletor reviews!
For more of the Sorceress I've also reviewed the green Series 2 M.U.S.C.L.E. figure, the VYNL Sorceress, the Funko POP! Sorceress #993, the Action Vinyls Sorceress (Pink) and the standard Sorceress, the Pint Size Heroes Sorceress, and the Mega Construx Sorceress included with Castle Grayskull.

If you're into birds check out my other reviews of Zoar: The crystal Zoar that came with the MOTUC Nepthu and Zoar from the Mega Construx Castle Grayskull.

If you're a fan of Zodac I've also reviewed the Super7 M.U.S.C.L.E. Zodac, the Colorforms Deluxe Play Set, and The Loyal Subjects Zodac Action Vinyl.

This is the first toy of Point Dread and the Talon Fighter that I've reviewed on the site.