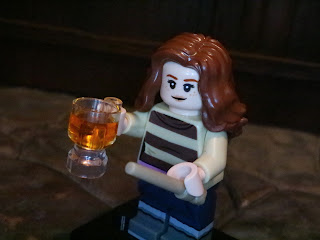 Well, this is new, isn't it? It's been over 5 years since I last reviewed a Lego set and I've never reviewed a Harry Potter item that I'm aware of. Back in August I started reading Harry Potter and the Sorcerer's Stone to my daughter and now she is absolutely nuts about Harry Potter. We're in the middle of the fifth book, she dressed up like Hermione Granger for Halloween, and she's building up a small  collection of Lego Harry Potter sets. For one day last month we both picked out one of the blind bagged sets from Lego's Harry Potter Collectible Minifigures Series 2. I was hoping to get Moaning Myrtle and my daughter was hoping to get a different figure but, oddly enough, we both ended up with Hermione. Weird, huh? I have no problem with having a minature Hermione hanging around. She's in an outfit she wears at the Three Broomsticks in the film Harry Potter and the Half-Blood Prince which my daughter hasn't watched yet (we're watching each film as we finish the respective book). Honestly, I'm not sure I ever saw the sixth film, either, so I'll be watching it with fresh eyes when we inevitably watch it in the coming months. Let's take a look at Hermione Granger after the break and see if she's worth adding to your collection... 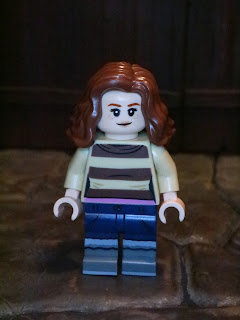 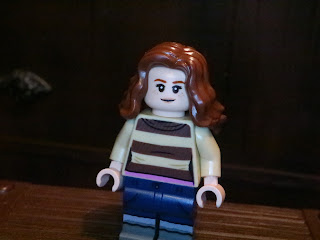 * While this might not be a recognizable minifigure if you're not familiar with the source material (I had to look aroun for where this outfit came from) Lego did a great job at making a very authentic Hermione outfit from this scene. The print on the shirt and even on the legs, which features boots, is pretty impressive. Lego sure has come a long ways, haven't they? Hermione's wearing a standard smile on her face and she's got her trademark dark hair and some freckles, too. 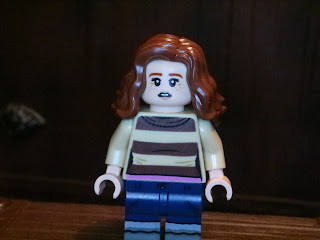 * Like most Lego minifigures these days Hermione has an alternate second face. This one makes her look a bit frightened, or at least flustered. 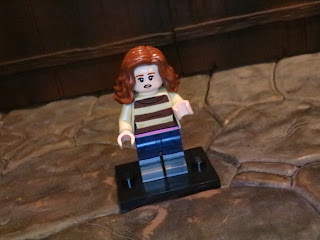 * If you don't know what to expect from the articulation on a Lego minifigure by now then you must not have had much of a childhood. Hermione moves at all of the palces you would expect and comes with a display stand to help keep her upright on your shelf. 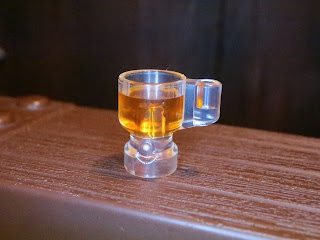 * To further tie this version of Hermione in with The Three Broomsticks she comes with a glass of butterbeer. Delicious! It's a butterscotch drink that is actually sold at the Universal theme parks and it's delicious. Kind of like butterscotch cream soda. Anyways, Hermione gets a big glass of it andit looks delicious! 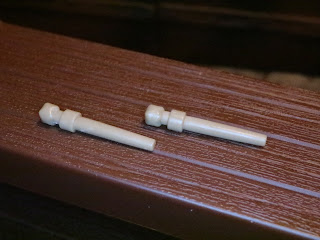 * Hermione also comes with her wand. Well, two wands, actually. The Lego wands come attached two a sprue with two wands per sprue, so two is what you get. The wand is really simple but it's an improvement over the Harry Potter wands from the earliest sets which were just standard plastic rods. They're actually designed so the figure can hold the wand in different positions in their hands. 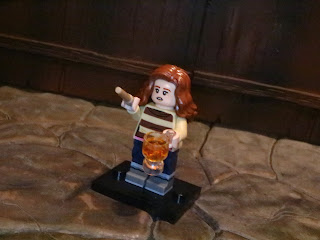 For a simple Lego minifigure, Hermione's not bad at all. This is not the most recognizable look for Hermione but with a pretty nice outfit print, a wand, a stand, and a mug of butterbeer, there's a lot to like her. Getting her was a bit of a fluke but I figures I might as well go ahead and review her. I'm giving her a Great! She's an excellent minifigure and I'll find a spot for her on my California Job Case when I next rotate some stuff out.
This is the first toy of Hermione Granger I've reviewed on the site.
Posted by Barbecue17 at 11/14/2020