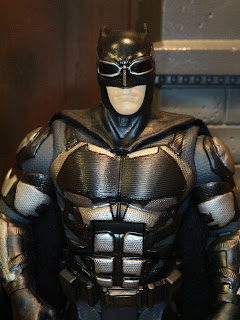 Time for another Justice League action figure review! Let's hope that this one fairs better than yesterday's Superman figure, right? Today I'm checking out Batman, the second figure in the series (based on the numbers on the back of the box). Interestingly, while the package just calls this Batman, every other company producing figures and statues of this same design seems to be calling this the Tactical Suit. I wonder why Mattel didn't call this one Tactical Suit Batman? Do they think that sounds overly Kenner-ish? Anyways, Batman is probably going to be the easiest figure in this series to find as the early cased have him packed three to a case of eight (with everyone else packed one to a case). I picked this up at Target when they were first released, along with Superman, Cyborg, and Wonder Woman. I've managed to pick up Aquaman thus far but I'm still without the Flash! For now, though, we'll focus on Tactical Suit Batman, the one character who seems to have a noticeably different costume for Justice League. More after the break... 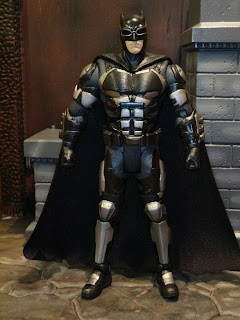 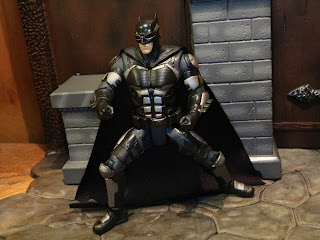 * Batman's articulation isn't going to surprise you at all if you've picked up any of Mattel's film based DC Multiverse figures. The articulation scheme has been quite consistent (although this guy does have swivel/hinge elbows) and the figure overall feels like a solid, durable toy. I'm not crusty, cynical, and jaded enough yet to not appreciate the fact that this figure could actually be played with by a child. In fact, after buying these my daughter and I did break them out during a lunch trip to Steak & Shake. 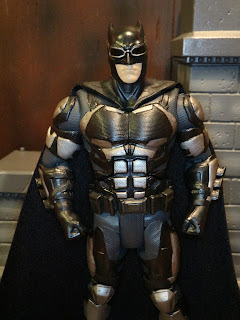 *I'm digging this costume. It reminds me of both the more armored Arkham Asylum series batsuits which are some of my favorite designs. It's not crazy armored like the BvS Armored Batsuit, though, making it a nice middle ground between the standard Batsuit and something super heavy. While Bruce can take a few more blows with this thing on, he can also move around a bit. I love the color scheme; there's quite a bit more going on here than you might think at first. Also, the enormous Frank Miller styled bat symbol (even larger than the standard BvS suit's bat) just looks awesome. It definitely bears some resemblance to Night Owl's suit from the film Watchmen (which I love), which design wise was inspired by the batsuits from the Schumacher Batman films (which I loathe). Somehow it all works here, though. 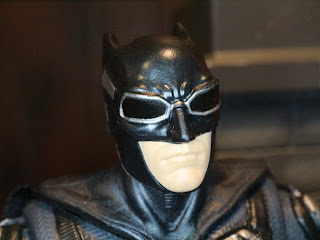 * Here's the head. It's not insanely detailed but I think Mattel did a decent job on it. While it looks like the standard Affleck batsuit, the goggles really do give it a different look. The goggles look really cool here, though. 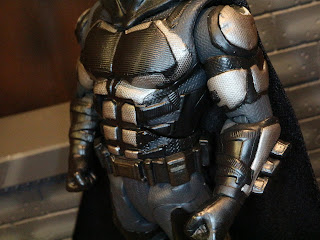 * Take a close look at the Tactical Batsuit and you'll be impressed by the detailing. The overall suit has a really cool texture, perhaps some sort of woven armor to help keep it light while remaining durable. There's also the trusty utility belt (with a nice dry-brushing effect) and some wicked cool blades on the gauntlets. You know that I always give props when a Batman figure has unbent gauntlets, so consider this props! 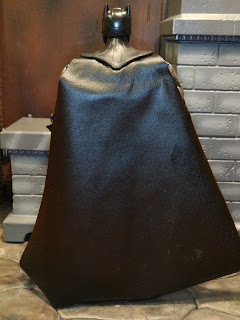 * While Superman's cloth cape is weak and see-through, Batman's cape pretty decent. The material is quite a bit thicker and has a pleathery feel on the outside (with a softer feel on the inside). We're not talking Mezco One:12 Collective quality by any stretch of the imagination, but this is still quite a bit cooler than you standard solid plastic cape. 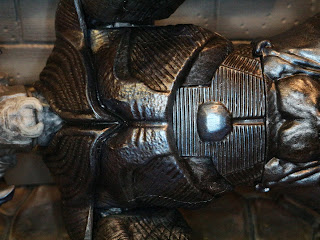 * Each figure in this six figure series includes a piece of the Collect & Connect figure Steppenwolf. Steppenwolf's torso comes with Batman. I'm still in the process of building mine, so I'll review it when mine is complete, but for now I'll just say that I always appreciate when a Collect & Connect piece is included. 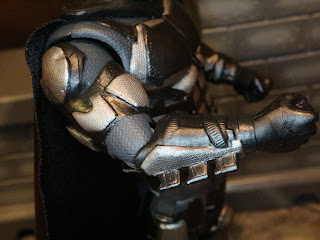 
* Batman's no Superman, but he does have a few kryptonite-like weaknesses of his own. First, his elbow articulation is severely, severely limited. Bummer. 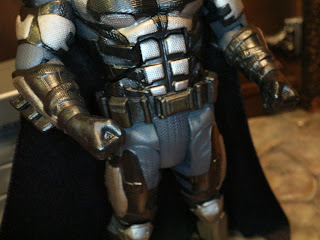 * Secondly, I have to point out that both of Batman's hands are fists. I know he likes to punch, but this also means that he can't interact with any accessories. Not that he comes with any. Still, whether you want to give this guy an extra batarang from another figure or you're expecting this figure to come with a bat gadget that he can hold, you'll be disappointed. 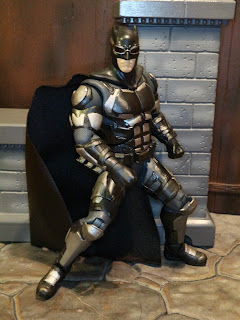 Mattel's take on Tactical Suit Batman isn't bad for a $20 dollar mass market retail figure. While you and I both know that within a year or so Bandai, Medicom, Mezco, and probably a few other companies will start releasing insanely impressive versions of this guy, Mattel has the benefit of being first, being easily available, and coming with a piece of the Steppenwolf build-a-figure. I really do like the sculpt and paintwork on this figure as there is quite a lot of intricate armoring that has been captured here very well. While he is most certainly not going to be the definitive version of this particular rendition of Batman, I do think he's a Good and a 1/2 toy. Collectors of this line and Batman fans will probably have a hard time not passing him by, so when you cave in just know that you won't be terribly sorry or anything.

If you're looking for more Batman reviews, you're in luck! I've reviewed so many Batman toys that the Dark Knight has his own review archive! Check it out!

If you want to check out more DC Comics Multiverse figures from Mattel, I've reviewed plenty: