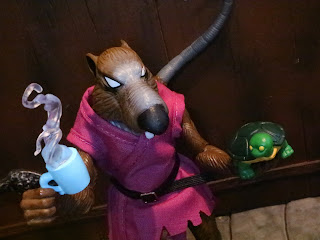 Today I'm checking out the last figure from series 1 of Super7's Teenage Mutant Ninja Turtles Ultimates and it is the turtles' beloved sensei, Splinter. Is there a cooler father figure character than Splinter? Whether you prefer him as Hamato Yoshi mutated into the form of a rat, the pet rat of Hamato Yoshi, or the reincarnation of Hamato Yoshi in the body of a rat, Splinter is always a noble, heroic, loving father to the turtles and a ninja master you don't want to mess around with. Like the rest of the line, this version of master Splinter is based on the design of the vintage toy with a few new accessories that make him even more exciting. Series 1 of this line seems to have sold quite well and Super7 has announced everything through wave 4, so at the very least we'll get the original 10 figures plus some other assorted heroes and villains for Splinter to mentor or defeat. Let's check out Splinter after the break... 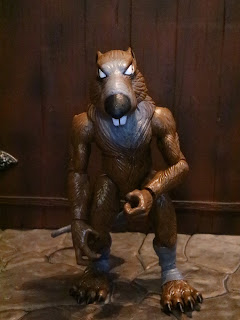 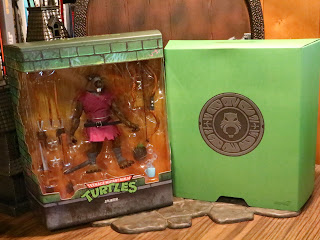 * Super7 consistently delivers some of the nicest packaging in the action figure industry and this continues with the TMNT Ultimates line. Each figure comes in a window box with a cardboard sleeve over it. The heroes get a green sleeve adorned with a manhole cover with their face on top. There are actually little bows and arrows on the side as well, which is pretty cool. Inside is a window box. It's not truly collector friendly packaging but you don't have to really destroy anything to get the figure out. 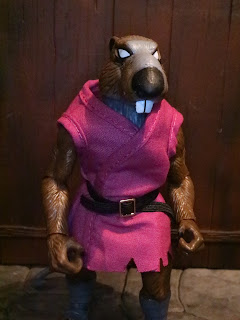 * Splinter looks fantastic and seems like a near exact recreation of the vintage toy, just bigger and with a few more clothing options and paint details. He's fuzzy and wearing a maroon kimono. What more can I say? His main robe that he comes wearing is a really nice fabric robe. It fits him very well, looks pretty impressive, and has a working elastic belt. This is my preferred robe. 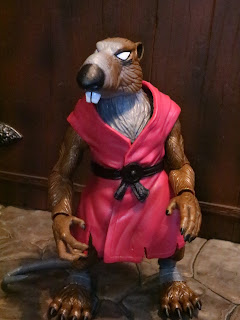 * Splinter actually comes with a second robe which is a plastic robe. It's fairly easy to put on if you pop off his hands. I don't like the look as well though it does have a more vintage styled belt. I've read that other collectors couldn't get the robe to stay closed but I haven't had any issues. The plug on the belt works great on my figure. 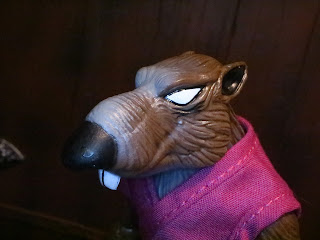 * The headsculpt is what most sets the toy Splinter apart from most other versions. He just has a really cool look with the all white, comic inspired eyes and the enormous front teeth. I've always liked this Splinter. The 1990 movie version is probably my favorite Splinter (while IDW's is my favorite Splinter origin) but this one is very nostalgic and looks fantastic. Great paintwork, too. 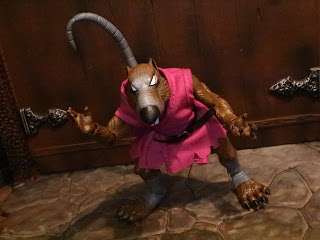 * Overall I like Splinter's articulation. He's missing a few points of articulation that the other figures have (thigh swivel, boot cut) but he's got that tail which helps him take some cool poses. He's another very high quality figure in the line and he fun to pose in various battle stances. This Splinter is way more articulated than the original figure for sure. 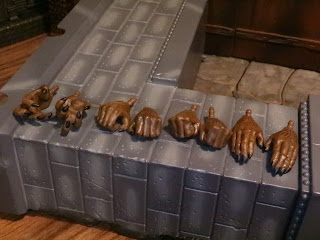 * Splinter comes with 8 interchangeable hands that swap out quite easily and allow him to either better hold his weapons or use some expressive gestures. He's got a pair of clawing/ gesturing hands, a pair of standard grips, a pair of fists, and a pair of flat, karate chop hands. 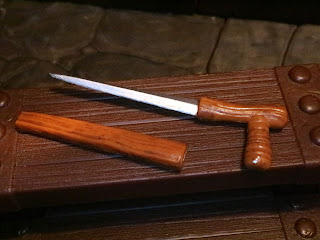 * Splinter's first accessory is his sword cane, a tonfa like cane that has a removable blade. The vintage figure came with this accessory as well, but here it gets a drybrushed effect to bring out the detail of the wood and a silver paint app on the blade, making it look nice and extra sharp. 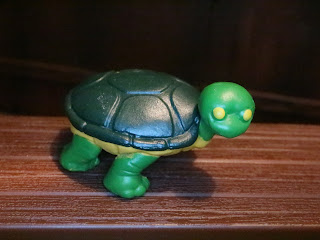 * Splinter's next accessory is a baby turtle. Which one? Who knows? It's a nice little painted minifigure, though, and it reminds me of the little turtles that were found in the canisters of Ooze back in the day. 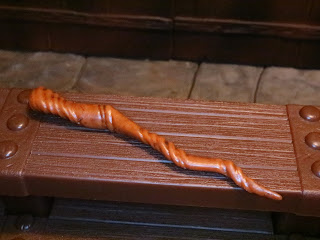 * When he needs an actual cane, and not a sword cane, Splinter can use this gnarly walking stick. It's looks quite nice in his hands and is something we've always seen Splinter using in various TMNT media. 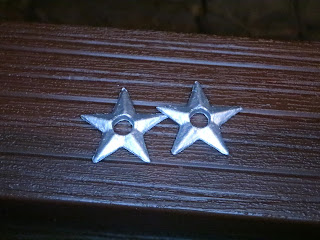 * When he needs to reach out and slice someone Splinter can use one of his two included shuriken. They're smaller than the shuriken included with Raph and the Foot Soldier. These are another accessory that the vintage figure came with. 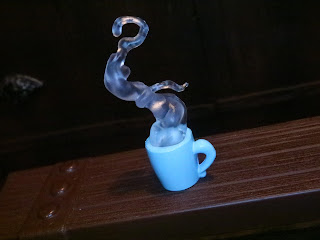 * Another new accessory is a really cool cup of tea. There's even translucent steam rising off the top of the cup! This one is really pretty impressive and it looks great in pictures. 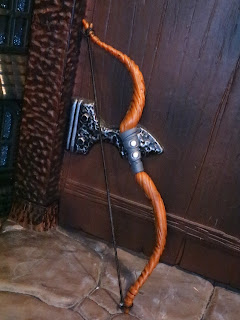 * Splinter's final weapon from the vintage line is a really nice bow. This is quite a gorgeous piece with lots of paint applications, a pretty sweet sculpt, and an actual elastic string. Usually action figure bows don't actually work anymore but this one does and it's marvelous. 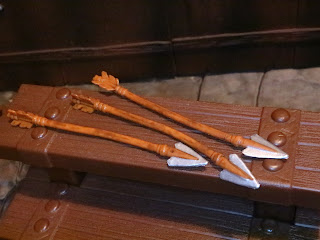 * Splinter also comes with three arrows to fire at the Foot! 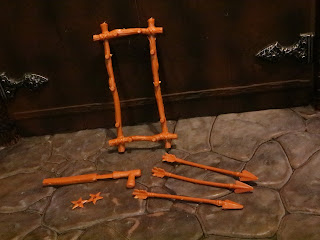 *Like the rest of the line, Splinter also comes with a copy of some of his weapons attached to a weapons rack, just like the vintage figure. You get an extra unpainted sword cane, three arrows, and two shuriken, plus the "wooden" weapons rack. While I thought the weapons rack accessories were a waste on Baxter Stockman, getting these weapons in the traditional color of the vintage accessories is a really nice feature. They're not too different from what Splinter comes packaged with but who can turn down more arrows? * Just like the vintage toys, the weapons rack accessories come attached on a sprue. You have to use sharp scissors or a knife to cut most of these loose which requires a steady hand and some work. Honestly, I wish these just came loose. I guess it's clever and nostalgic but I'd rather just have a copy of the accessories in these vintage colors and not have to do extra work or risk damaging them (or myself) or just get an extra unique accessory, like one more little turtle. 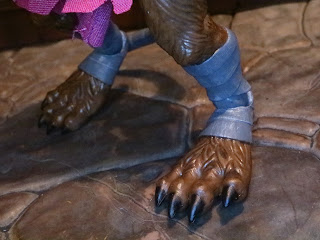 * Splinter's feet look awesome but the ankles do tend to be a bit loose. Not crazy loose but you made need to futz with him a bit to get him to stand in some poses. His tail really does help keep him standing. 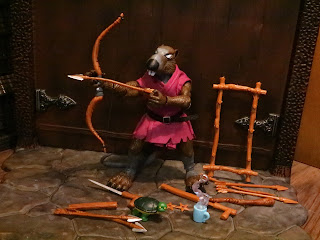 I've seen a lot of complaints about the price on these figures but when you look at all the stuff you're getting on what has got to be a smaller run than most other companies are producing , I think you're at least getting your money's worth. These aren't inexpensive figures but if you're collecting TMNT figures based on the toys you had as a kid sold through a preorder model don't pretend that you're comparing these to Walmart bargain bin stuff. These are really nicely designed and Splinter is another hit. All of series 1 is excellent but it's a tossup between Raphael, Splinter, and Foot Soldier as to who the star of the series is. Who's your favorite?