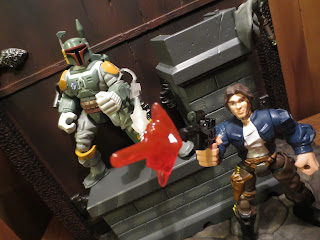 Is there any greater pairing of action figures in the Star Wars galaxy than Boba Fett and Han Solo? For a year or so I've been tempted by Hasbro's Marvel Mashers but it was Star Wars that finally got me to jump in and pick up some of these figures. While I was anxious to grab a few of the Black Series figures on Force Friday, I really wasn't terribly interested in much else. The traditional 1/18th scale figures just aren't doing it for me and the Micro Machines just don't seem to have the quality behind them that I had hoped for. The Hero Mashers, though, won me over. Not only do they have a fun, Sigma 6 like vibe, but they have characters from a variety of film (and cartoons) and they're big enough and durable enough that I can play with them with my little one. The Hero Mashers currently come in a four different varieties: Single packs, deluxe figures, double packs, and small vehicles with a pilot (5 packs and larger vehicles are coming). Han and Boba Fett here are one of the initial three 2-packs and features Boba Fett and Han Solo in there The Empire Strikes Back outfits. Ready for a look at everyone's favorite bounty hunter and scoundrel? Then join me after the break... 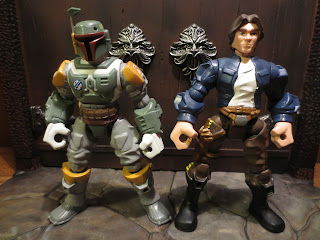 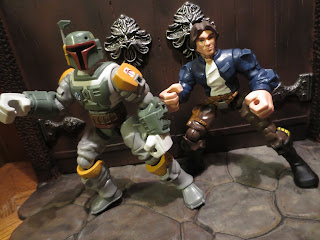 *While these figures aren't as articulated as The Black Series, they do have more joints than any other Star Wars figures you'll currently find on the shelves. They have some fun, solid articulation and feel rather durable. The only thing that I wish they had were swivel/hinge shoulders, but I'll mention get there in a minute. 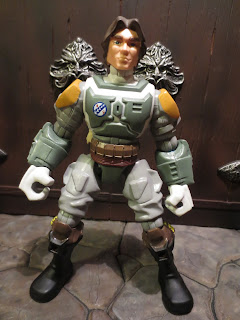 * While the various Mashers lines have been out for a year or so now, 2015 seems to be the year of the swappable figures. Hasbro has been putting these out for nearly every property they have and Playmates has a similar range of figures for their TMNT line. I really wasn't too interested in the mashing concept but after I started playing around with these I began having some fun. Here's Han wearing Mandalorian armor! The removable parts are the feet, thighs, lower arms, and head. For the most part the pieces are easy to swap and stay on nice and tight. 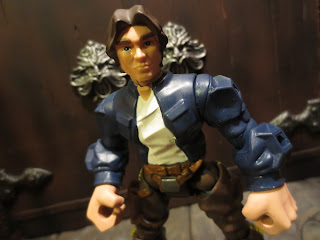 * Harrison Ford is notorious for having a likeness that is difficult to capture when it comes to action figures of all sizes. While it's not perfect, this is still a nice stylized rendition of Han in the blue jacket he wears throughout most of ESB. My wife commented that he looks like a kid dressed as Han Solo but I'm not seeing that. I think the figure manages to capture the essence of Han Solo if not the exact likeness. The outfit is pretty spot on, though. 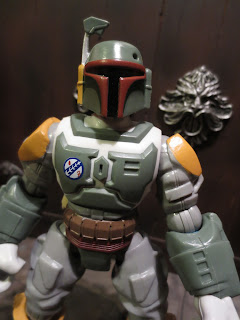 * The sculpts of armored characters and aliens work even better in this style and Boba Fett looks really awesome. As mentioned above, this Boba Fett differs from the single packed Fett due to not only his accessories but also his colors. This is definitely more of an ESB Fett while the single-packed version is from ROTJ. There really are lots of cool details on here. I'd love to see these guys in a cartoon of some kind. 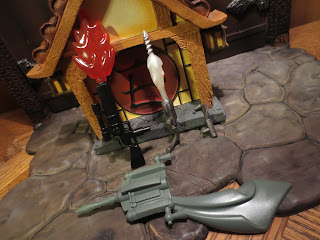 * Boba Fett comes with four accessories: His EE-3 Carbine rifle, Mitrinomon Z-6 jetpack, arm cable, and dart launcher. Other than the jetpack the weapons are a bit pliable and seem very durable. There aren't a lot of paint apps on them but they're very clearly recognizable as to what they are. 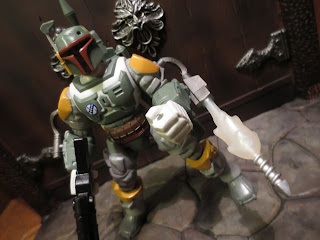 * Boba Fett looks pretty sweet all geared up. His jet pack tightly snaps onto the two pegs on his back while the cables easily plug into his shoulder and forearm pegs. The dart launching effect on his left wrist is very cool and looks fantastic with a translucent plastic "launching" effect. 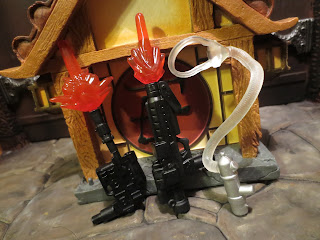 * Han comes with two blasters and the Roamer-6 breath mask that he wears while hunting Mynocks inside the space slug. The two blasters are Han's DL-44 heavy blaster pistol and an E-11 blaster rifle. 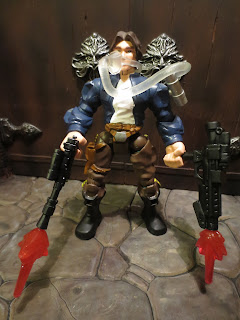 *And here's Han all geared up! You have to remove his head to put the breathing mask on and the tank can attach to his left shoulder port very easily. I don't think Han Solo ever uses one of the Stormtrooper blaster rifles while wearing this outfit but it does look great with him. I do like the blaster effects, although I'll mention a complaint I have with the weapons here in a second. 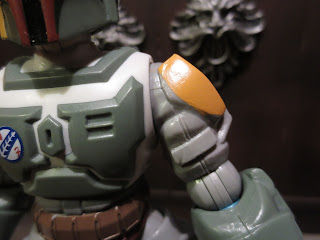 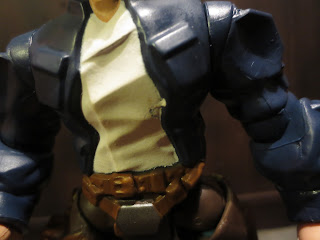 * I've looked at a number of these sets and most of them seem to have this weird smudge where Han's stylish blue jacket meets his white dress shirt. Han might be a scruffy looking nerf herder, but he was always a stylish dresser and wouldn't let something like this happen, right? 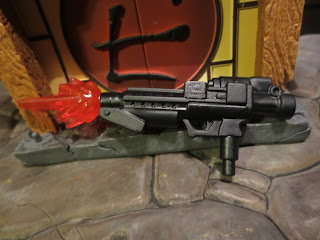 * I really do like the blast effects on the tips of the weapons. I liked it back when the Episode 2 figures came out and I like it now. What I don't like, however, is that the blast effects are not removable. They're permanently attached, which is kind of lame. Furthermore, while the figures have holes that can fit the pegs on the blasters, the pegs are awkwardly positioned on the handles and not on the side anywhere. It'd be very cool if Han could carry a blaster on his right hip or across his back. 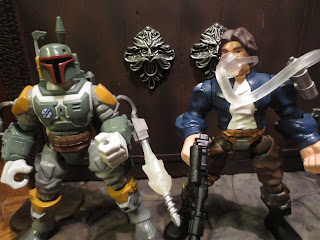 I really, really like these. They're definitely not for everyone but I'm loving the unique character selection, the stylized designs, and the fun mashing features. These guys are reasonably priced and far more fun than the traditional 1/18th scale figures Hasbro is releasing. If you're going to try one of these sets, I imagine Boba Fett and Han Solo will be the most appealing. You get two excellent scoundrels and some great accessories in one go. I'm giving this set a Great rating and have been having a lot of fun with it. I'm going to be reviewing quite a few of these in the near future, so I hope you're interested in them too!

I've reviewed a ton of other Star Wars figures, including: