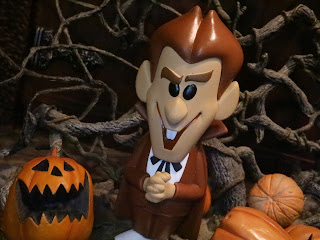 Happy Re-Halloween! I hope you've spent the past week doing everything you missed out on during the hustle and bustle of Halloween last week. Did you catch up on some favorite movies you missed? How about carving a pumpkin you didn't get around to converting into a Jack o' lantern? Today I'm checking out a "horror" themed figure that just didn't make it into The Dawn of 31 Days of Toy Terror: Count Chocula from Funko's Vinyl SODA line! Next year is the 50th anniversary of Count Chocula and Franken Berry cereal so I'm hoping General Mills has big plans to celebrate as well as bring back some old favorites (like Fruit Brute and Fruity Yummy Mummy). Heck, I'd love to see them introduce a new character, too. We could really use a female monster. Maybe a witch or a mer-girl? Oh, how about a banshee? Banshees are the best! Anyways, Count Chocula is clearly the leader of the Cereal Monsters and while his cereal is probably my least favorite of the bunch you can't deny the character's coolness. Let's check out Count Chocula after the break.... 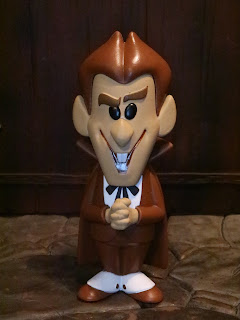 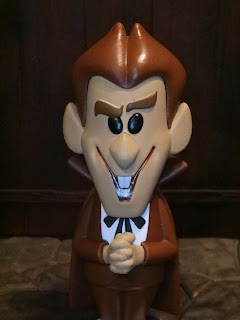 The Positives:
* It's Count Choclua rendered in the fun style of the Vinyl Soda line. What's not to like? He's a solid vinyl figure with clean paintwork, solid sculpting, and a really fun retro-looking aesthetic that fits the General Mills Cereal Monsters perfectly. I like how the Count has his hands clenched together, as if he is invitin you in for a bowl of cereal or plotting some scheme to rob the Hershey's factory. 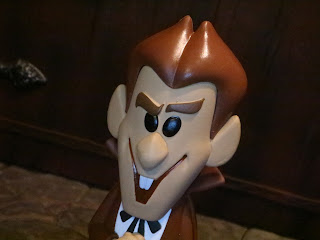 * The headsculpts on the Vinyl SODA figures always have a lot of personality. Count Chocula has a big, goofy grin and one eyebrow cocked higher than the other. It's a great expression that absolutely tells you the guy is up to something. 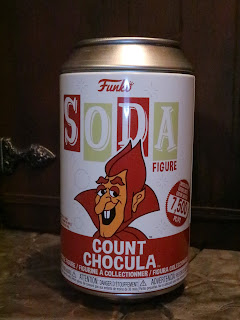 * I absolutely love the cans these come in! The soda can design is so incredibly cool and makes for a rather unique display piece on a shelf next to he figure. Have you ever had chocolate soda? I remember having it a few times as a kid and I imagine that's what  Count Chocula would taste like if it were a real thing. The can shows off Count Chocula and displays all of the expected labels and legal info, etc. The top of the can separates so you could use the can to store trinkets as well, and it's even sculpted to look like the top of a soda can. It's made from a much more durable metal than your average soda can, too, so it's quite a nice collectible. 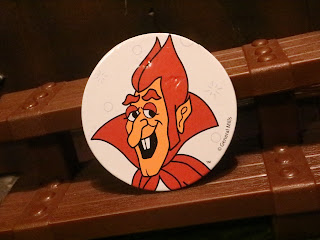 * Inside the can is a round, sturdy cardboard disc. It's kind of like a POG, though a bit larger. On the front is Count Chocula, the creepiest member of breakfast cereal royalty, while the back has the figure's name and the run amount listed (6,300). 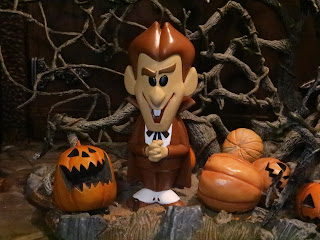 Count Chocula is a cool little collectible of the breakfast cereal icon and he gets a Good and a 1/2 rating from me. He's not as exciting as the Fruit Brute, maybe due to his more limited color palette, but he's still a pretty nifty part of the display. How can you have the General Mills monsters and not have Count Chocula, right? I'm now just trying to track down Boo Berry to complete my set (a Franken Berry review will show up at some point) so I can finally have the crew assembled.
If General Mills released a new monster cereal next year in celebration of the 50th anniversary of the brand who would you like to see?
This is the first toy of Count Chocula I've reviewed.
For more figures from Vinyl SODA check out the following:
Fruit Brute
Yummy Mummy