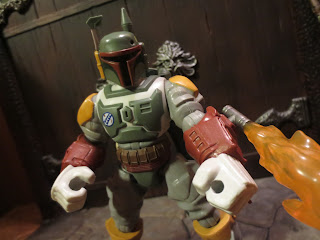 While I finished reviewing everything from my Force Friday haul a few weeks ago, I did pick up a couple more of the Star Wars Hero Mashers that I initially ignored on Force Friday shortly afterwards. The first one I picked up was the single carded deluxe Boba Fett figure. While I initially ignored him since I had purchased the Han Solo Vs. Boba Fett set, closer inspection made me realize that the two Fetts differ in two ways: Accessories and coloring. While the two-pack Fett's coloring looks more like his appearance in The Empire Strikes Back, the single boxed figure has a more Return of the Jedi inspired appearance. Since I've mostly reviewed this figure already just a few weeks ago, I'm simply adding on some thoughts about the differences. Check the main review for the more in-depth analysis; check this one for a flaming good time! 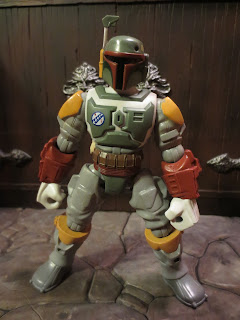 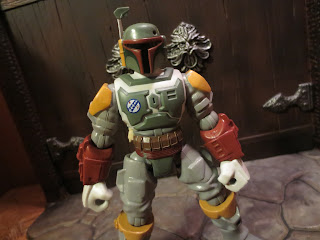 * I kind of mentioned it in the intro but the only difference between the actual figure in this version and the two-pack verison is that Fett's forearm gauntlets are red instead of green. That's it. 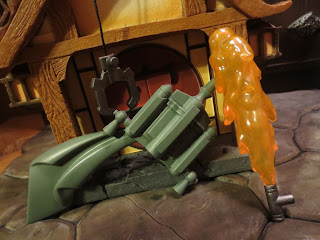 * The deluxe Boba Fett comes with three accessories: His jetpack, a capture claw, and his wrist mounted flamethrower. The jetpack is exactly the same as the two-pack version but the other two accessories are unique. The capture claw can snap onto Fett's wrist and shoulder and the claw can be extended and retracted manually. The flame is a much cooler accessory, however. 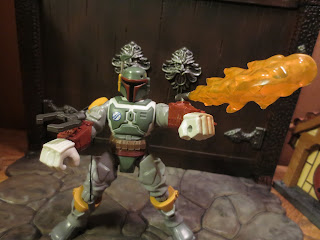 * I really love this snap on flame accessory. The claw is just OK but if it weren't for the flame burst I would not have purchased this. That's how much I love flame effects on toys. 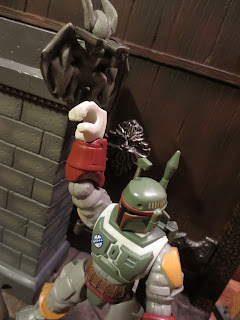 If you're picking up just one Boba Fett figure, I actually prefer this one. It doesn't come with his rifle (which is odd since it's a deluxe figure) but the flame is much cooler than the cable line from the two-pack. Still, if you want the Bespin Han Solo, as I'm guessing collectors of this line will, you'll still probably end up with the two-pack. Boba Fett is a nice figure and it definitely worth grabbing as a cool Fett collectible for fans of this line. I'd give him a solid Good and a 1/2 rating. He's not as impressive as General Grievous but he's a strong figure in the line.

I've reviewed a few other Boba Fett figures including the Black Series Boba Fett and Walgreens exclusive Boba Fett (Prototype Armor. And, of course, there's the Mashers Fett I've referred to, along with plenty of other Mashers: