Sorry this one is late everyone! I've got a great excuse, though: Hurricane Zeta blew a few trees down across from my house, one of which knocked over some powerlines. We lost power on Thursday morning and didn't get it back until late Sunday evening. Fortunately, my parents live close by so we headed to their house where they still had power (though there internet was out until Friday night). Halloween wasn't a bust, though, and we still had plenty of Halloween adventures and fun. I'll detail those on Friday, though, as this is a catch-up post from last Thursday. So, what was I up to the week before Halloween? Let's check it out... 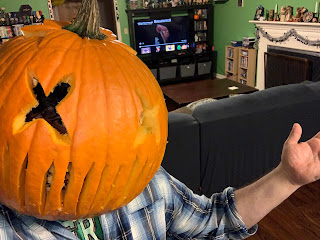 * We carved jack o'lanterns on Wednesday night and I had one that was so large that I was able to fit it on my head! I took a ton of pictures, so you'll probably see them pop up over the next few months for various reasons. Here's one that I thought turned out pretty well. Pumpkin selfie! More belated Halloween Hijinks after the break... 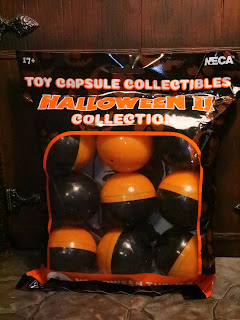 * Did you catch these Halloween 2 Toy Capsules from NECA this year? I saw the Child's Play eggs in Walmart one day but I didn't know there were Halloween eggs until I saw them on another site (I can't remember who, or I'd link to them. I got them as a gift from my family and had a fun time opening them with my little one. She's never seen any Halloween film but she loves the music and know who Michael Myers is, plus she loves opening surprise stuff like this. I won't spoil the surprise yet but there are two pieces in here that will go well with your NECA 7 inch scaled figures (though one of them is a straight up reused piece from the Halloween 3: Season of the Witch set. If you're looking for Halloween shoelaces, lanyards, magnets, and other little weird items, this might just be worth picking up. You may even find it on sale now, too. 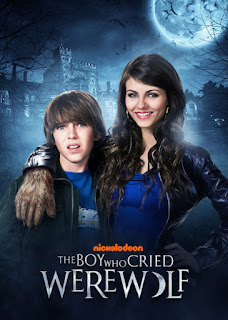 Remember how I promised I was going to watch real horror movies? Well... that didn't quite happen. With a 7-year old around all the time since she's doing school remotely this year due to Covid-19, we watched mostly family friendly Halloween movies. The Boy Who Cried Werewolf is a 2010 Nickeloden TV movie starring Victoria Justice and Chase Ellison as a sister and brother who find out that they are set to inherit their great uncle's castle in Wolfsberg, Romaia. From the poster, it's pretty clear that Victoria Justice becomes a werewolf and hijinks ensue. So far as Halloween kids movies go, this one is pretty decent with some cool werewolf effects and some rather funny running jokes. There are some pretty solid side characters, too, like Brooke Shields as Madame Varcolac, the stern housekeeper of the castle. If you have kids who want to watch a werewolf movie, you could do far worse than The Boy Who Cried Werewolf. 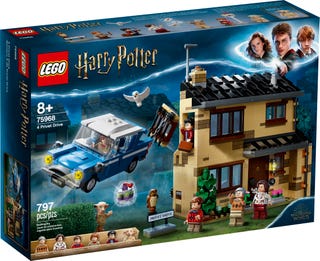 My daughter is obsessed with Harry Potter and, since she received excellent grades for her first half of the remote learning semester, we let her pick out a medium sized Lego set. She decided on 4 Privet Drive and we had a great time building the set the weekend before Halloween. For a few years (before my daughter was born until she was a year or two old) I was an AFOL and had a pretty respectable "haunted" city but I sold off most of my sets. It's fun to build these with her! This is a cool set with elements from the first two books including a barrage of letters that fly down the chimney, the enchanted Ford Anglia the Weasleys use to rescue Harry, the Dursleys, and Dobby with the floating cake. It's a nice set with quite a few unique minifigures and we really enjoyed it. 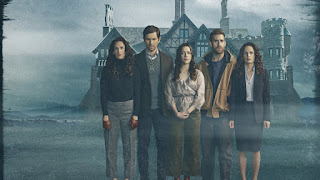 My wife and I did make it through three more episodes of 2018's The Haunting of Hill House this week (it would have been more but, you know, we lost power). Now being over halfway through the season/ show, I'm starting to lose some interest. It's definitely a well done show but it feels like it's spiraling around the same plot points over and over again and the show is getting less interesting and less frightening the more I watch it. My wife really likes it, so I imagine we'll finish it, but if it were just me I'd probably drop out around now.

And, of course, here's a quick look at the most popular reviews on the site this week:

Beast Man from Masters of the Universe Origins is on his second week and he's sitting up at the top of the chart. Who doesn't like Beast Man? Well, Skeletor for one. He seems to truly loath the guy. I guess the Heroic Warriors also probably hate him. Evil-Lyn? She won't give him the time of day. Sheesh. It must be hard being Beast Man! These figures seem to now be in good supply and more collectors and casual fans are getting their hands on them.

Mighty Max Slays the Doom Dragon is on its third week and as one of my reviews from The Dawn of 31 Days of Toy Terror it's really exciting to see the enthusiasm for this one. I loved Mighty Max as a kid and I still love adding more sets to my collection. If you dig Mighty Max too, please let me know! I'd love to pull out more for future reviews...

Gung Ho from G.I. Joe: Classified Series is on his third week on the chart. I really want to like this guy but I found him kind of disappointing. Still fun, though. He's the first series 2 figure I've reviewed though I've reviewed Cobra Commander as well, with the Red Ninja coming soon!

Arctic Mission Storm Shadow from G.I. Joe Classified Series is a new review from last week that's gotten some attention. This one was a pain for folks to get ahold of, wasn't it? I almost skipped him originally but I'm glad I didn't. He excellent! One of the best in the line.

Profit Director Destro from G.I. Joe: Classified Series is on his third week and continues to show us that while directing profits 8-EZ, it's lucrative for sure. The Classified Series is insanely popular and Profit Director Destro is one of my favorite figures in the line. He's smooth, savage, and ready to ...direct some profits, I guess. I can't wait for a themed Baroness to go with him!

Man-At-Arms from Masters of the Universe Origins is another new figure from this hot line. I'm really waiting for this line to find its own identity, like 200x or MOTUC, but these are still fun toys for the price point.

That's all for this week! See you again in just a few days since this one got delayed.