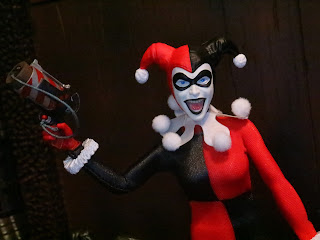 It's been well over a year since I last reviewed a Mezco One:12 Collective figure and over two years since I last reviewed a Harley Quinn figure! That's crazy! I've definitely been less interested in collecting DC stuff since Mattel lost the DC license and DC Collectibles stopped caring (though now they've gone away as well). McFarlane's stuff is quite cool but it's in a different scale and just hasn't roped me in. My DC purchases are far and few between these days but a One:12 Harley Quinn definitely appealed to me. I loved the One:12 Collective line when it first came out but over time I began to grow disenchanted with it. Some figures are amazing while others seem pretty by the numbers and less impressive than what Hasbro and NECA are doing in the same scale at around a quarter of the cost. I have a weakness for Harley, though, so I preordered both of the Harley Quinns they planned. I haven't received my "Playing for Keeps" Harley Quinn yet but I did receive this Harley on Halloween. Released as Harley Quinn: Deluxe Edition, she definitely comes loaded with enough extras that seem to allow her to live up to the name. Ready to see if this is a worthwhile Harley for the collection? Then join me after the break... 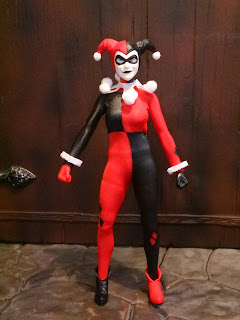 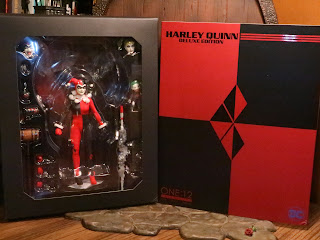 * Harley Quinn comes packaged in a standard Mezco box that has a removable slipcover. It's almost completely collector friendly although it is sadly missing the cool art that the earlier figures had. 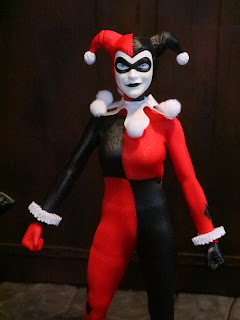 * It's nice to see a classic Harley Quinn in Mezco's One:12 Collective line. I will admit that this is no longer my favorite look for Harley Quinn (bring on those pitchforks and torches!) but I still love the classic look and it's nice to have it rendered in this style. The colors are spot on and the standard female body looks good in this outfit. Some of the Mezco One:12 females haven't been as impressive due to the body's underlying articulation being pretty visible but since Harley's costume completely covers her here, she's not harmed by that. 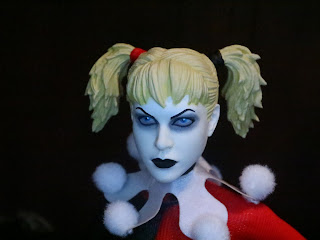 * Harley Quinn has three interchangeable portraits and they all swap like a dream. Let's start with my favorite which is Harley without her hood and mask. It's a great sculpt and captures a pretty serious looking Harley with gorgeous eyes. She's also sporting ball jointed pigtails, too. This sculpt has amazing paintwork and is arguably the most impressive. 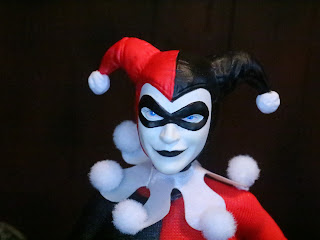 * How about next up I do my last favorite portrait? It's still good, just my least favorite. This is the standard headsculpt. The details on the jester's cap and mask look great, as does Harley's grin. I wish the face was a bit different (this doesn't look like the same woman as in the first sculpt in my eyes) but it's still easily recognizable and nicely rendred. 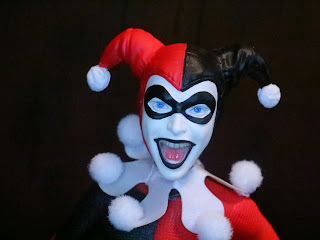 * Last up is this fantastic laughing portrait. Super expressive portraits like this often look better when viewed with the entire figure in a pose, so trust me when I say this one looks great on the figure. Her mouth is open and you can see her teeth, tongue, and other details. It's crazy impressive detail in this scale! 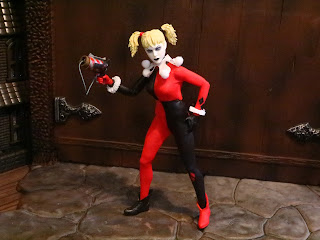 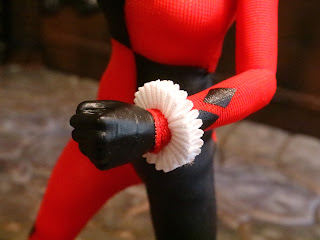 * I really like the ruffled collars on Harley's wrists. They're quite neat with an unusual fabric design. They're technically removable though they're a pain to get back on. 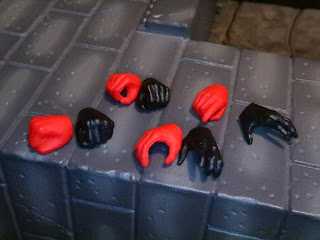 * Harley comes with eight interchangeable hands. There is a pair of fists, a pair of standard grips, a pair of open palms, a wide grip for the left hand, and a right hand pistol grip. 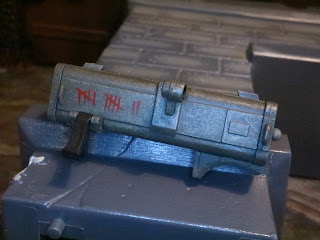 * Harley Quinn comes rocking some serious equipment, the first we'll be covering is this really cool rocket launcher. It's sized just right for her (Mezco avoided the trope of action figure rocket launchers usually being ridiculously oversized) and she can hold it perfectly with the hinged handle on the side. The paint work is nice, too. I like the little tally marks scrawled on the sized. 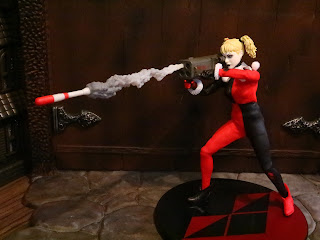 * The best part of the rocket launcher is this really cool launching missile that's depicted flying out of the barrel. The missile looks really cool and is followed by a trail of smoke that plugs into any of the launch chambers. How cool is this, right? 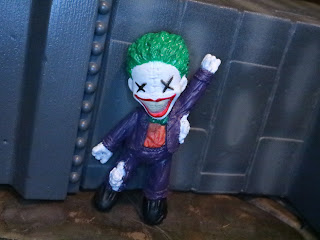 * It's not a weapon but Harley does come with a little doll of the Joker. He's a solid plastic accessory though he looks like a raggedy stuffed animal, complete with stuffing spilling out in a few places. 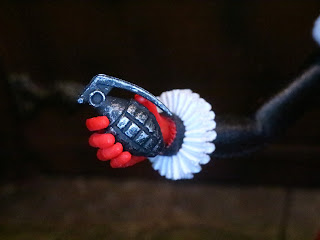 * Harley loves making things go boom and to aid her in that she comes with a hand grenade. It's a standard pineapple grenade with some weathering on it. I'm surprised that it doesn't actually have a real pin on it but it looks pretty slick for sure. 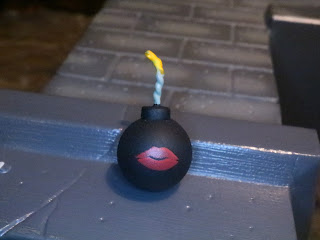 * When she really wants some lights, sounds, and screams Harley comes with a very traditional looking bomb. It's round, like you'd expect from a cartoon bomb, and it has a fuse that looks like it's lit. What else? How about some lips on the side! A kiss from Dr. Harleen Quinzel herself. 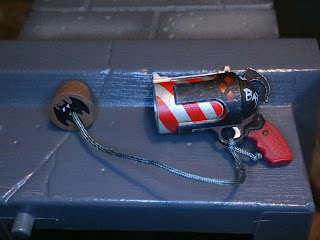 * One of Harley's trademark weapons is a pop-gun styled pistol and this figure comes with a pop-gun with a removable cork! It's held on by a string. The paint detail is really cool with a Batman logo on the cork and a little message on the back, reading "4 Batman." 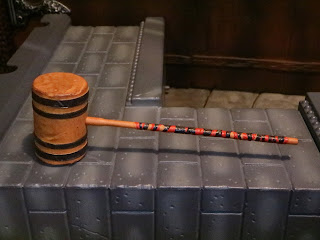 * Harley's last weapon is perhaps he most iconic: A mallet! It's a pretty standard mallet with black and red wrappings on the handle and a lot of sculpting to give it the look of a real wooden hammer. 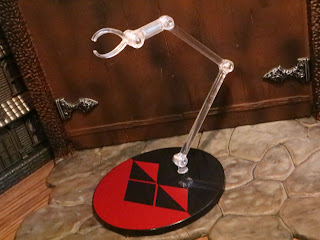 *  Harley comes with a round base with her diamond logo on it and a removable footpeg. The footpeg can be replaced with an articulated display arm which allows you to get some great, secure poses here. The joints are very nice and tight on the display bar and it can absolutely support the figure's weight if you want to depict Harley leaping in the air to bash some fools. 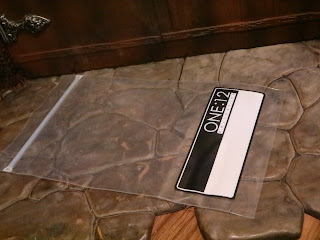 * I've mentioned the collector friendly box Harley comes packaged in, allowing you to remove the figure and all of her accessories without damaging the box in any way. Harley also includes a One:12 Collective branded Ziploc styled bag to store extra hands and accessories if you want to have them readily available but still want to keep them from getting lost. 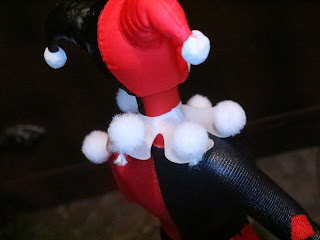 * Harley's collar is a soft goods piece but it just doesn't look very good. The white puffy balls look fine but the collar itself is warped and just seems oddly unrealistic. It's removable but Harley looks quite bare without it. 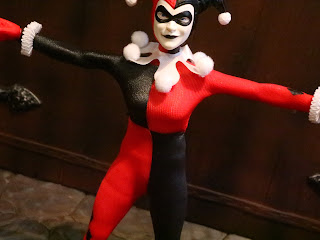 * I'm good with the colors and fit of Harley's costume but the design of the red and black segments looks very off to me. It doesn't look even and even with trying to mess with it a bit it still looks off. I'm not terribly impressed by it for sure. 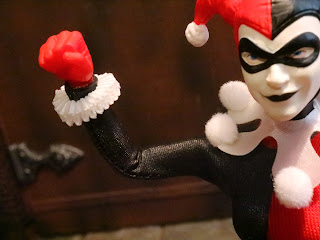 * Like most of the female Mezco figures, Harley's elbow articulation doesn't even hit 90 degrees. This really kills her ability to hold subtle poses involving her hands and arms, doesn't it? They really need to fix this as most companies are doing a better job in the $20 dollar price range than Mezco is doing in the $90 dollar range. 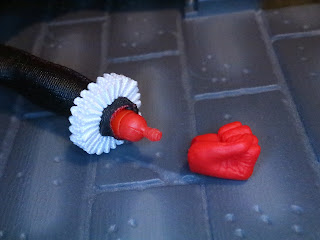 * Switching out the hands is tough. Not only are they difficult to get on and off but you have to be careful not to pull the cuffs. They will come off and they're a pain to get back on. 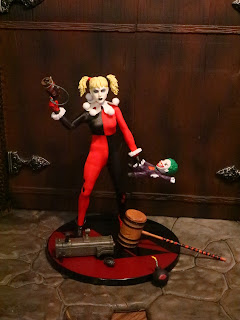 There's no doubt that Harley Quinn is a really good figure with solid headsculpts and excellent accessories. The problem, though, is that there are just some issues with her costume that make her less impressive than I would hope. Secondly, the price of the figure definitely makes the smaller issues stand out quite a bit more. I really like this figure but I'm not blown away with it like I was by some of the earlier Mezco figures. If the whole point of Mezco's One:12 Collective line is the presence of fabric outfits and the outfit is the least impressive part of this figure, doesn't that kind of negate the major selling point? Harley Quinn is a Good and a 1/2 figure. She's pricey for sure but the accessories definitely make her worth considering. I've also ordered the Mezco "Playing for Keeps" roller derby inspired Harley Quinn and I have high hopes for her as her costume seems like the kind of outfit Mezco typically does a better job with. We'll see how she turns out in the coming weeks once she arrives and I get a chance to review her.
I've reviewed so many Harley Quinn figures that she has her own review index! Check out the Harley Quinndex for all of the Harley reviews you could ever want!
For more review from Mezco's One:12 Collective DC Universe line check out the following:
Armored Batman: Batman V. Superman (Convention Exclusive)
Arsenal
Batman: Ascending Knight
Batman: Ascending Knight (Mezco Exclusive)
Batman: Batman V. Superman
Batman and Mutant Leader (SDCC Exclusive)
Batman: The Dark Knight Returns (PX Previews Exclusive)
Deathstroke
The Flash
Green Arrow
Harley Quinn (Suicide Squad)
The Joker
The Joker: Deluxe Edition
Knightmare Batman: Batman V. Superman
Shazam
Superman
Superman: Red Son
Zoom