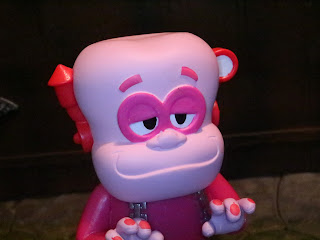 Yeah, it's no longer the Halloween season but I still want to show off another monster from the Vinyl SODA line and this time it's Franken Berry. Introduced in 1971, Franken Berry is a strawberry flavored cereal and the titular mascot is a pink, steampunk version of Frankenstein's monster. I've actually reviewed the cereal before, way back in 2013, and I'd say that it's my third favorite of the cereals with Franken Berry being my fourth favorite mascot. All of the monsters are cool, but he's definitely not Boo Berry or Fruit Brute cool. Funko released this guy in a limited run of 7,500 and I got my hands on him. Let's check out Franken Berry after the break... 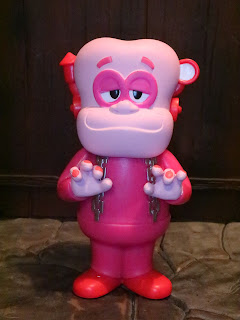 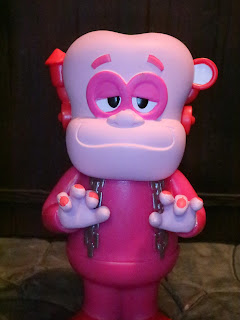 The Positives:
* While I've kind of made fun of Franken Berry's color scheme before I have to say that he looks mighty fine as a Vinyl SODA figure. The bright colors look fantastic as the red, pink, and magenta nicely complement each other and help this guy to stand out on the shelf. Franke Berry is sporting some chain-link suspenders and he's got his hands out in front of him as if he's getting ready to grab your breakfast!
* Extra points because he has the little strawberries on his fingernails! 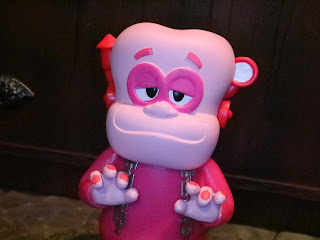 * Franken Berry has a fantastic headsculpt. The style of the Vinyl SODA line really fits him well and the bright, colorful, and smooth look of the vinyl does wonders for him. I love the little eyebrows and the steampunk gadgets on the side of his head. His headsculpt is second only to Fruit Brute in this line. 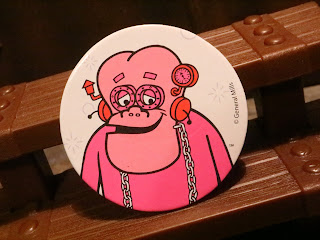 *  Inside the package you also get a round, sturdy cardboard disc. It's kind of like a POG, though a bit larger. On the front is a tasteful portrait of Franken Berry while the back has the figure's name and the run amount listed (6,300). 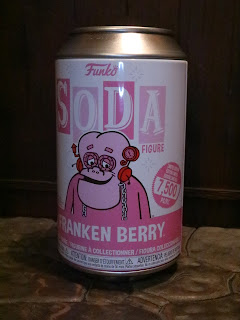 * I absolutely love the cans these come in! The soda can design is so incredibly cool and makes for a rather unique display piece on a shelf next to he figure. I imagine Franken Berry would be a strawberry soda, less tart and more subtly sweet and creamy. The can shows off Franken Berry and displays all of the expected labels and legal info, etc. The top of the can separates so you could use the can to store trinkets as well, and it's even sculpted to look like the top of a soda can. It's made from a much more durable metal than your average soda can, too, so it's quite a nice collectible. 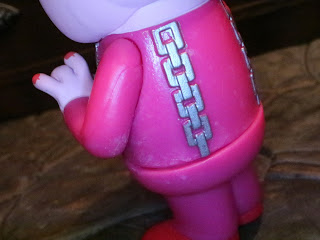 The Negatives:
* This one might be tough to spot in photographs but take notice of the weird texture on the side and back of the figure (see the spots that look sort of discolored?). Sometimes vinyl figures end up with this weird texture that is really off putting and robs the vinyl toy of the clean, neat aesthetic they're usually known for. 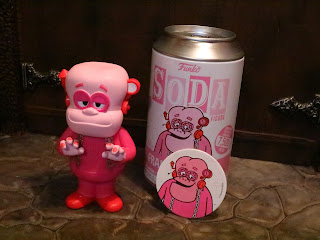 Franken Berry turned out to be a pretty nice vinyl figure. I really like him and I'm convinced that he's one of the best SODA figures in the General Mills monsters line. It's too bad he's got the weird texturing marring parts of the figure. He's a Good and a 1/2 figure, though, and you'll surely want him to go along with your Vinyl SODA monsters. I now have everyone expect for Boo Berry, who I'm still trying to track down. Wish me luck!
If you're a fan of Franken Berry I've also reviewed the actual Franken Berry breakfast cereal.
For more figures from Vinyl SODA check out the following:
Count Chocula
Fruit Brute
Yummy Mummy
Posted by Barbecue17 at 11/14/2020