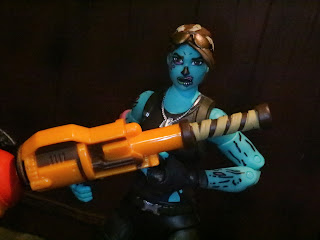 I love how the Fortnite: Legendary Series figures just seemingly drop out of nowhere! I actually received the Ghoul Trooper in the mail on October 30th from Amazon, which made for a cool Halloween surprise. I had preordered her back before NY Toy Fair 2020 so it was nice to finally have her arrive. While the 1/18th scale lines has been filled with both male and female characters the 6-inch Legendary Series has really been mostly men with the only other woman released being Valkyrie, who was released last year. The Ghoul Trooper uses the standard female character model (I think she's referred to as Ramirez) which makes me hopeful we'll start to see more female characters in the line. The Ghoul Trooper skin has a few different looks but this one is considered the default one and it's clearly a zombie-like design. Are you up for a combat ready zombie? Then join me after the break... 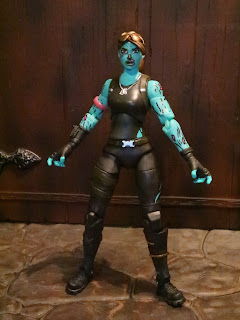 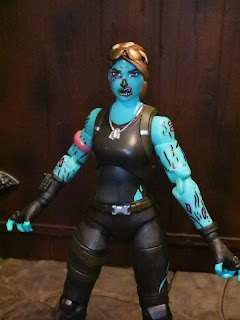 * The Ghoul Trooper gives us a first glimpse of the standard Fortnite female character model, and I'm hoping this means we are getting ready to receive quite a few ladies in the Legendary Series line. The sculpt is great and captures the unique aesthetic of Fortnite. The Ghoul Trooper is meant to look like a zombie but even from the game renders it's clear that the design elements like the tears on her arms and such are painted on. This really is intended to be someone in a costume versus an actual zombie from the best I can tell, so I like the way Jazwares pulled this off. She looks fantastic and I love her bluish-green skin. Of course, she's covered with other little details like her dog tags, wrist communicator, and the bandanna tied around her right arm. 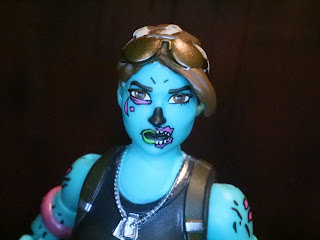 * The headsculpt is fantastic and looks just like the in-game model. The heads are awappable, so you get three different looks. The first is a more angry, aggressive look. The paintwork is very neat and clean and the face printing is spot on. I love the sunglasses resting on the Ghoul Trooper's head as well. very stylish! 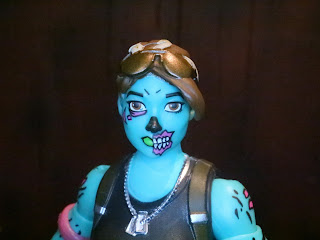 * The second face plate is a fairly neutral look for the Ghoul Trooper. 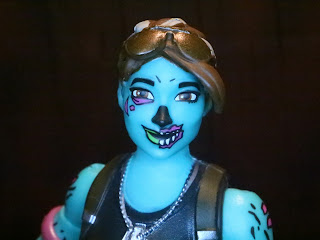 * The last face plate is a friendly looking face showing the Ghoul Trooper with a big smile. The face plates swap easily and they stay on quite snugly as well, so that's a plus. 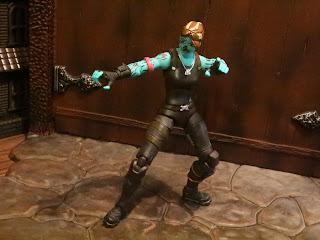 * This is a completely new body sculpt but overall it retains the same articulation model as most of the Fortnite: Legendary Series figures (though we do just get simple hinged ankles rather than swivel/hinge ankles). The Ghoul Trooper is sturdy and quite well articulated. the joints are all really tight and she can take some great poses. 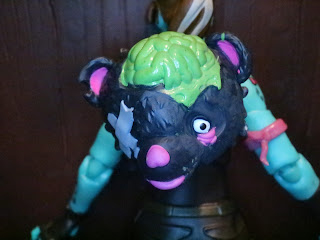 * The Ghoul Trooper's back bling is called the Bear Brained and it's a giant stuffed bear head with visible green brains. It's a raggedy looking thing and seems fitting for the ghoulish aesthetic this figure is going for. It stays on her back nice and securely, too. 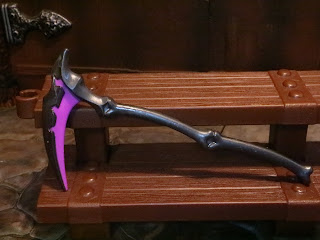 * The Ghoul Trooper's harvesting tool is the Ultra Scythe, a scythe made of black bones with a glowing purple blade. It's a pretty sweet look and is fitting for a goth. 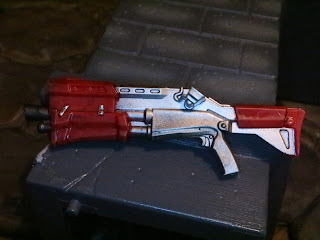 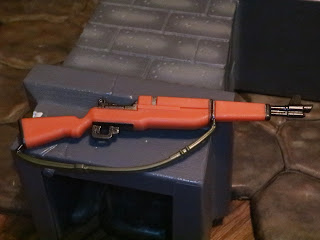 * The Infantry rifle is another weapon we've seen quite a lot lately. It's not a bad sculpt at all but I hope we don't see it again for awhile. There are too many new weapons to give us. 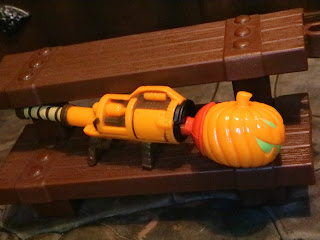 * Hey! Now this is more like it! The Ghoul Trooper comes with an amazing Pumpkin Launcher which is a skin for the Rocket Launcher from the Fortnitemares event. This is an amazing weapon with a completely unique sculpt, a great green greenish glow emanating from the jack o' lantern, and lots of cool paint apps. The Ghoul Trooper can hold it perfectly, too, which is a real plus. 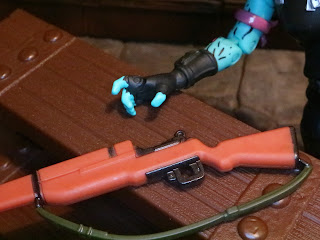 * Most of the Fortnite: Legendary Series have figures holding their weapons but since the Ghoul Trooper's hands are a bit smaller than her male counterparts in the line she really cannot hold her shotgun, rifle, or scythe (the Pumpkin Launcher fits perfectly, though). This is kind of a bummer and something Jazwares really needs to work on with all figures, but especially if we get more women in the line. 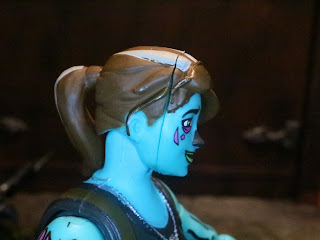 * Like many of the human characters with interchangeable face plates, the separation between the head and the face plates is quite noticeable from the side. It's not horrible but it definitely is a little odd looking. 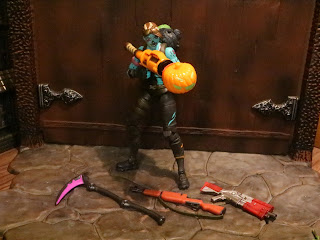 You know, while I'm complaining that the Ghoul Trooper can't hold her standard weapons she holds her Pumpkin Launcher better than any other figure in the lines holds their gear. She's a really, really excellent figure except that she can't hold the standard weapons. I'm very happy with her (she's one of my favorites from the line this year) and I'm able to overlook this issue since there are so many weapons in the line. I'm giving her a Great and a 1/2. That might seem a bit generous but I really like the figure and the Pumpkin Launcher is just too amazing for words. Now, bring on more ladies, Jazwares!