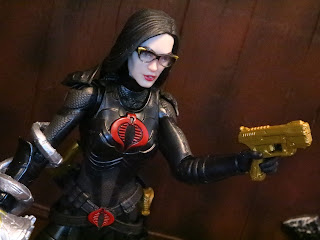 Today I'm finally getting around to the final figure in the Target exclusive Special Missions: Cobra Island subset of the G.I. Joe: Classified Series and it's the Baroness with the Cobra C.O.I.L. motorcycle. Not only are the Target figures ludicrously difficult to get but the Baroness is one of the most popular G.I. Joe characters out there. While you can be almost assured that Hasbro will re-release her down the line in a different color scheme Target's exclusive version of the Baroness is incredibly faithful to her vintage look and includes the first vehicle in the series. There seems to be a lot of disappointment with the Cobra C.O.I.L. cycle and now might be a really good time to determine how interested collectors of this line actually are in vehicles. I know the A Real American Hero line was basically built on cool vehicles and playsets but that's pretty improbable with the 6 inch scaled line. I'd be completely OK if Hasbro just came out and said we wouldn't see any vehicles in the line but perhaps this is Hasbro's effort to gauge collector interest? Things are probably pretty skewed, here, as I imagine most collectors would buy the Baroness if she came packaged with a box of oatmeal. Anyways, I've had her in hand for a few weeks now and the Baroness is a very impressive figure. How's that cycle working out for her, though? Find out after the break... 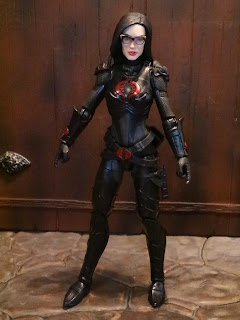 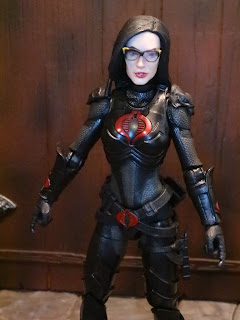 The Positives:
* The Baroness looks fine, and I do mean fine. Seriously, no one wears black armor with snake symbols on it better than this woman. Hasbro did a stellar job with her armor. You can actually see the difference in the shiny black armored plates and the more matte "flexible" parts of the armor. Her shoulder pads are also very cool with some excellent snake-like details on them. Hasbro is doing amazing texture work on the Classified series and Anastasia deCobray Cisarovna has never looked better. 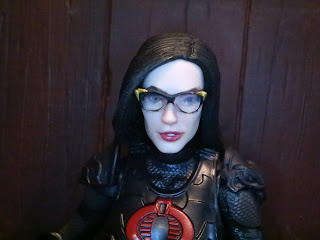 * The Baroness' headsculpt looks fantastic as well. Her glasses are a separate sculpted piece (though not removable) and they atually have thin plastic lenses in them. I think my picture makes them look slightly askew but in person they're excellent. 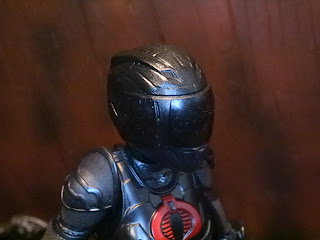 * The Baroness also comes with an alternate portrait, which I believe is the first in this line. Since she comes with the Cobra C.O.I.L. a helmeted head is included. The helmet is quite sleek with a snakehead design on it. Some collectors have been army building these and using this masked head as the Baroness' private guard, but I think most of us are lucky to even find one of these. 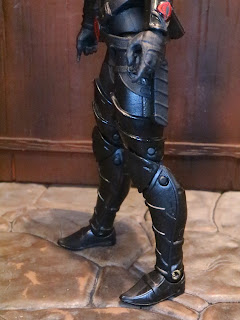 * Whether they're for combat, motorcycle safety, or just fashion, the Baroness' boots are pretty incredible. 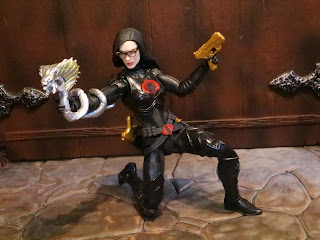 *  I really like the articulation on the Classified Series and the Baroness is another stellar figure who can do nearly anything you need her to do. These are some of the most well articulated and durable action figures on the market and the quality of the joints on them is really quite impressive. Currently, I probably spend more time messing around with this toyline than any other at the moment. 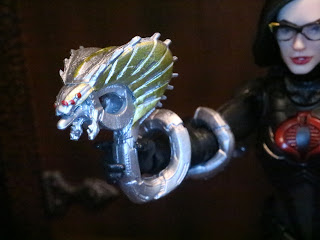 * The Baroness is loaded with weapons and her most impressive is this crazy cobra themed laser weapon. It looks like some sort of snake transformer and is intended to look like it's wrapped around the arm of the figure. The upper body is essentially the pistol grip and the barrel of the device looks like it is comin out of the mouth of the snake. How cool! I really wish Hasbro included more information about the weapons with each figure on the packaging as it'd be interesting to know how the designer sees this weapon. 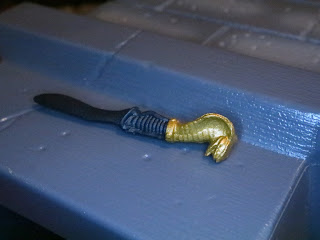 * When things get down and dirty and some close quarters treachery is needed the baroness can whip out another snake themed weapon. This one is a dagger with a cobra head as the handle. 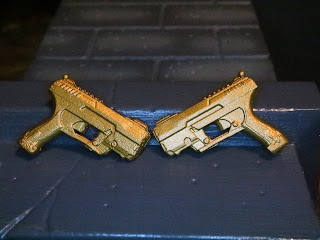 * She's wielding two pistols as her backup weapons, although I like to use these with her the most. These actually look like the same pistols that Duke and Beach Head carry except they're a bit more compact. They're also gold, so bling bling and all that. 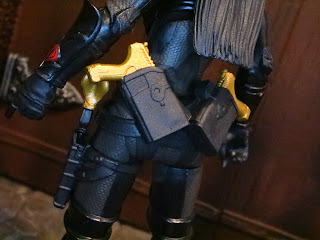 * I love that the team behind this line tries to ensure that the figures can carry all of their gear! The Baroness can carry her dagger in the sheathe on her left hip and her twin pistols in the holsters hanging from the back of her belt. They work great and she looks very cool loaded up for battle. 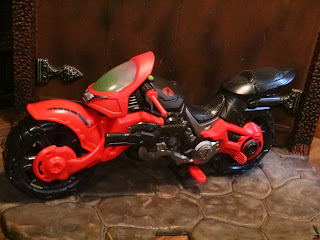 There have been a few different uses of the term Cobra C.O.I.L. or just Coil in G.I. Joe lore but this time around the C.O.I.L. is a large motorcycle. Mostly red and black, the C.O.I.L. is a fairly sharp looking (though somewhat generic feeling) motorcycle. There really aren't any crazy features on it that I'd immediately associate with G.I. Joe, though that might be a good thing to some. It reminds me of one of the motorcycles from the Marvel Legends line. It's quite sturdy and solid, too, and it rolls smoothly. 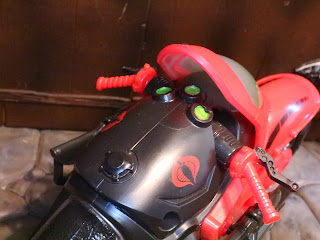 * One of the most impressive features of the Cobra C.O.I.L. are the articulated handlebars. They're actually on ball joints so characters with differently sized arms and hands can use the handlebars. That's a cool feature that I'm not sure I've seen before, though I can't remember the last time I bought a toy motorcycle. 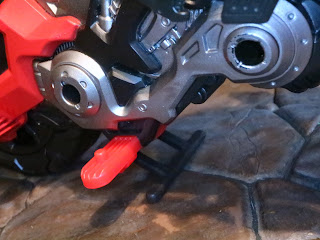 * To help keep the Cobra C.O.I.L. standing upright there is a working kickstand underneath. It works great and helps keep the cycle from tipping over on your shelf. 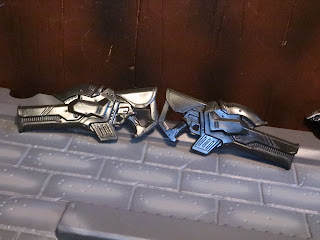 * There are two assault rifles that attach to the sides of the Cobra C.O.I.L. as offensive weaponry. Of course, they can also be removed and used as separate weapons. They're cool sculpts for sure. 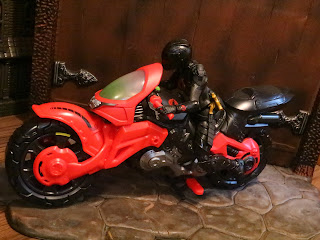 * The Baroness looks really good posed on the C.O.I.L. cycle. It fits her well and she's poseable enough to look fantastic riding it. With the alternate helmeted head on her the hinged neck joint really works, allowing her to more realistically ride the cycle than with her standard head. 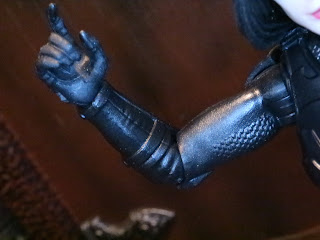 The Negatives:
* Overall I love the articulation the Baroness but her elbows have a very limited range of motion. Scarlett had limited elbow range, too, so I'm concerned this might be a problem with the female figures going forward. Hopefully Hasbro can improve this with the next female figure we get, whoever it may be. These elbows make holding the C.O.I.L.s rifles really difficult, too, as she really can't do a two handed hold well at all. 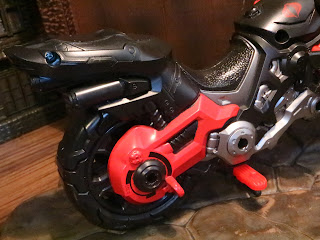 * When you look closely at the bike you realize that it's not terrible but it doesn't feel like it is as detailed as you would expect from this line. It's kind of basic and just a bit dull. There are lots of place where you would expect a paint hit but won't find any. 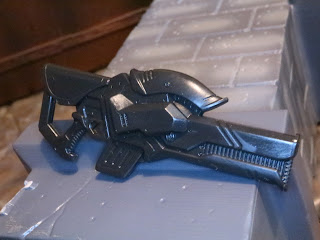 * The rifles on the sides of the bike are cool but, again, they could really use some paint applications. Hasbro is very hit or miss as to which figures get painted accessories and which ones don't and while the Baroness' direct accessories are pretty nice, the C.O.I.L.'s guns are rather bland. 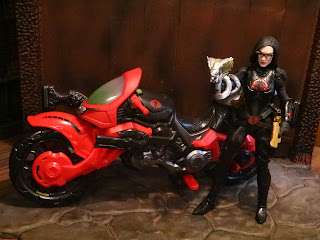 The Baroness is easily one of my favorite figures in the line so far while the C.O.I.L. cycle is just OK. It's not terrible, but it's way less exciting than it's rider. That's OK, though. This is still a pretty good set and if you break the cost down you're getting Baroness at a standard $20 price point and the C.O.I.L. cycle at that same $20 price point. Is the bike worth $20 bucks? That doesn't seem like an unreasonable price. Overall, I'd give this set a Great and a 1/2. The bike is still a good toy and the Baroness looks awesome on it. There's no way you'd pass this up and you know it.