Road to Rise of the Skywalker: Emperor Palpatine and Throne from Star Wars: The Black Series Phase III by Hasbro 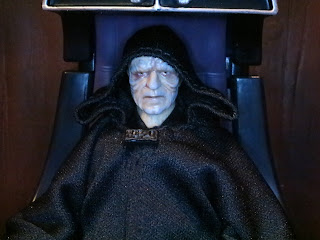 On December 20th, 2019 Star Wars Episode IX: Rise of the Skywalker will hit theaters and it seems like Sheev Palpatine is going to be making a reappearance.I'm pretty excited for that and I'm really, really hoping that an appropriate mixture of material from the Original Trilogy and the Prequel Trilogy will make Rise of the Skywalker a satisfying conclusion to the Trilogy of Trilogies, particularly after how disappointed I was by The Last Jedi. Regardless, we're getting some cool merchandise from Hasbro and today I'm checking out the Amazon exclusive Emperor Palpatine and Throne set from Star Wars: The Black Series. Emperor Palpatine was released in the Black Series nearly five years ago (way back in Phase II) but that figure was a little disappointing. Rather than simply re-release him in the Archive Series with a redone headsculpt, Hasbro fixed most of the problems with the original figure, threw in some additional portraits and the Emperor's throne, and are offering him as a deluxe set. Ready to see this new and improved version of the Emperor? Then join me after the break... 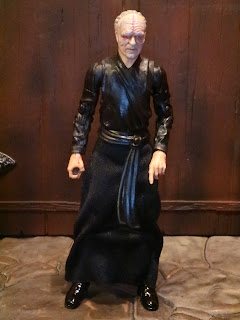 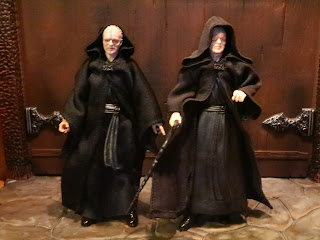 *On the left is the new Phase III Emperor Palpatine while the Phase II Emperor Palpatine is on the right. The two figures are very similar with the following differences: The headsculpt has the new faceprinting technology, there are paint applications on the hands, the robes are slightly different (the new robe is a bit shinier), and now the lower body features a soft robe rather than plastic, allowing the figure to actually sit down. 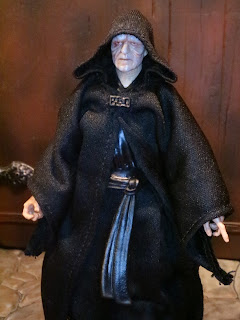 
* Overall Palpatine just looks better thanks to his new outer robe and the interior robe that now covers his lower body, too. The Emperor has a pretty simple costume that is very dependent on the shape of the robe, which can be more difficult to capture when using actual soft goods, but I think Hasbro did a pretty decent job here. The shape of the hood is especially well done and it sits quite well over the Emperor's head. 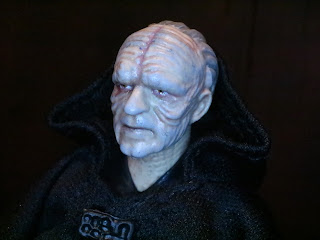 * The first portrait is the same as the one included with the figure's original release, though this time the paint applications are so much better. The face printing really captures the look of Ian McDiarmid from Return of the Jedi quite well, clearly marking this is an OT era Palpatine rather than Palpatine from the Prequels (who deserves his own figure/ figures). 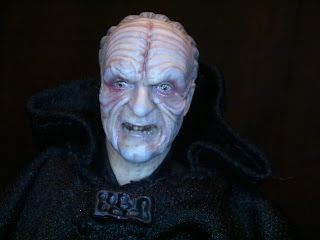 * The second face captures a very angry Palpatrine with a truly nasty grimace on his face. Check out those eyes! They're very, very wicked. 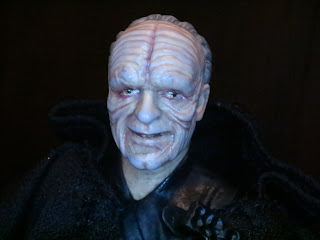 * Last up is my favorite: Darth Sidious emitting a menacing chuckle. He never seems more evil than when he's cackling over his evil plans or Luke Skywalker's attempts to turn Darth Vader back to the Light Side of the Force. 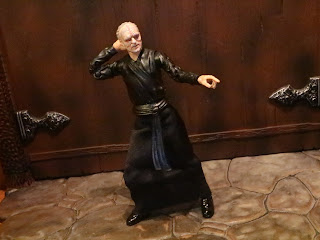 * Palpatine has the same articulation as the original figure, which means he has double hinged elbows, but he can now use all of the articulation in his lower body, too. The fabric lower robes on this updated Palpatine now allow for better leg motion and the ability for Palpatine to sit down on his throne. 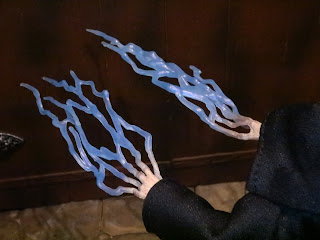 * Besides his regular hands, Palpatine now comes with a set of Force lightning hands. They look pretty cool as they're molded in translucent blue plastic an transition nicely from the lightning effect to his hands. The two biggest issues with the original Palpatine was that he couldn't sit down and he couldn't shoot Force lightning. Now bot of those problems are rectified! 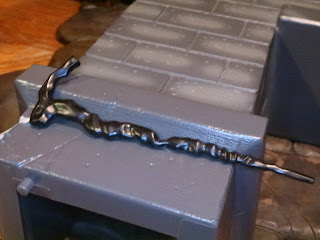 * Emperor Palpatine also comes with his cane, which appears to be the same accessory as was included with the original release. It's a fine accessory, so no change was really needed at all here. 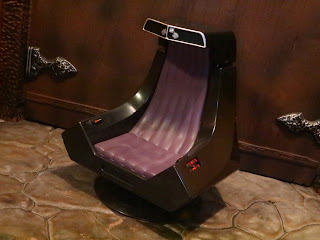 * One of the big selling points of this set is the Emperor's throne. It's made of two separate pieces (the base is removable) and can swivel at the base. The purple padding of the seat looks great and Palpatine fits into the throne perfectly. There are lots of cool little details, too, making this an excellent backdrop for your Black Series figures. 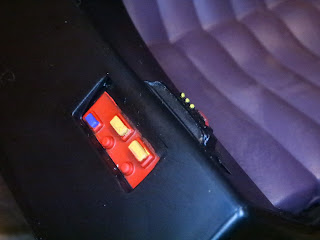 * The panels on the sides are also fairly detailed with multiple paint applications. 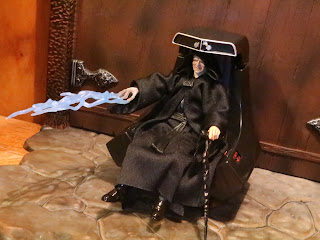 
* There are a few negative aspects to this figure, mainly the fact that the hands and the heads are fairly difficult to swap. They require a lot of force and the hands seem like they could be a bit flimsy, so be careful when swapping things out. 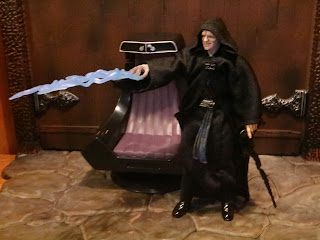 This set is definitely an improvement over the original release and there's really no flaws with the Emperor himself other than that it's a bit difficult to switch out the hands and extra headsculpts. The throne is pretty cool, too, and makes a welcome accessory for the figure. The figure costs around $40 bucks though, which makes it seem around $5-$10 dollars overpriced. Still, it's tough to really skip this set if you're an Original Trilogy fan. It's still a Great set and lots of fun. Combine this with Luke, Vader, and some Royal Guards and you're in for a good time!