The Scream of 31 Days of Toy Terror: Wampa #60 from Star Wars Miniatures by Wizards of the Coast 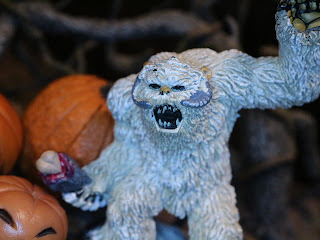 It's time for another sci-fi creature to make an appearance in The Scream of 31 Days of Toy Terror and this time it's another Star Wars creature: The Wampa! Back in 2004 I was nuts about Wizards of the Coasts' Star Wars Miniatures game. I got really into the first series, Rebel Storm and while I did play the game, and actually had a few friends who started playing it, too, I was mostly interested in the miniatures. Collecting a full set of these guys was really difficult. The booster packs were $12.99 each, which seemed a bit pricier at the time, and each included seven miniatures. While six of the miniatures were common or uncommon army builder figures, one of them was guaranteed to be a Rare or Very Rare. The Wampa is a Very Rare and was one of my most anticipated figures. I still love this guy and, as always, I'm still a firm believer in the validity of vicious snow creatures always having a place during the Halloween season. Ready for a look at this cool Wampa minifigure? Then join me after the break... 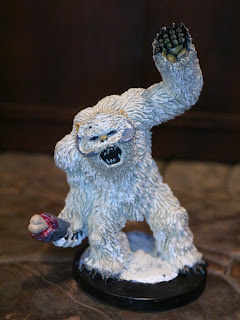 Original Retail Price: $13 for a booster pack of 7 figures. 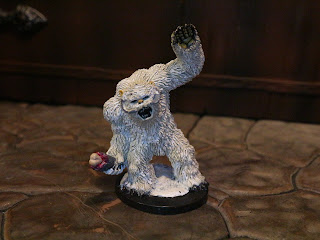 * The Wampa is pretty large. His head is lower on his body, so on paper he seems shorter, but he rather wide and flailing his arm about while looking for some lunch! He is permanently mounted to a snow covered base. Flip him over and many of the game details are present. You'll need the game card to fully play, though, but I don't have mine around at the moment. 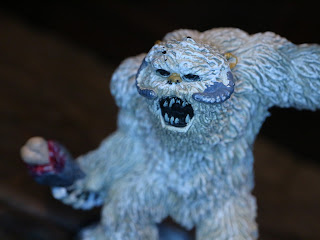 * The sculpt is awesome. For the size, these are more the quality of something you'd see from Games Worshop or something rather than many other miniature games. I love the paint detail here! Despite it being a mass produced, blindboxed item it really has the look and feel of a handpainted gaming miniature. 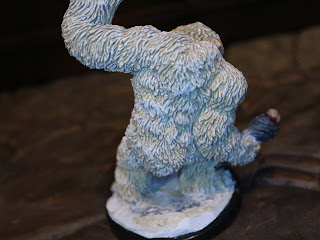 * The fur is phenomenal. I love the detail, the drybrushing effects, and the amount of texture on the Wampa. I've always loved Wampas and this is definitely one of my favorite representations of the character even though it's smaller than a vintage R2-D2 figure. 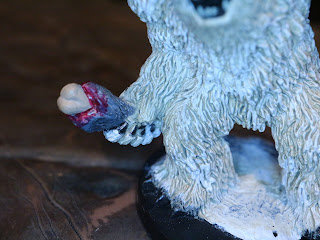 * The Wampa didn't show up to this party alone, though! Nope, he brought a snack! Yeah, the Wampa has part of a Tauntaun leg with him. Yummy! 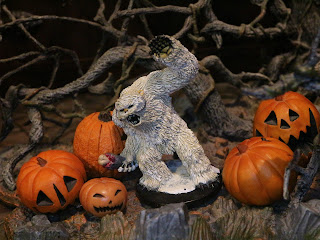 I like to mix things up for 31 Days of Toy Terror and I've never reviewed any of the Star Wars Miniatures before. They're really nice miniatures and definitely some of the coolest Star Wars collectibles in this small of a scale. I don't love them as much as Micro Machines, although they do kind of press the same buttons for me. Some of them can be had pretty cheaply these days, so who knows? Maybe I'll go pick up a few more stragglers for my collection. This guy is a Great and a 1/2 minifigure and another representation from The Empire Strikes Back on this countdown. Who couldn't love this guy, right?

If you need more Wampas in your life, check out my review of the Wampa from the Black Series Luke Skywalker and Wampa 2-pack and the Wampa mini-head from the Micro Machines Mini Heads set.
Posted by Barbecue17 at 10/14/2019