The Scream of 31 Days of Toy Terror: Spawn from Spawn: The Movie by McFarlane Toys 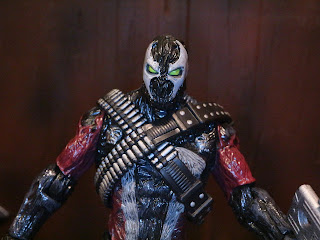 I'm sticking with the 1990s for today's installment of The Scream of 31 Days of Toy Terror, more specifically the year 1997. Whether you were a toy collector or a comic fan, Spawn was a big deal that year. While today superhero films are essentially a genre of their own, it's interesting that so many of the comic movies in the late 1990s and earlier 2000s were essentially horror films. The market for comic book films themselves just wasn't as receptive then as it is today so studios used comic books with a horror basis to get crossover appeal. Bring in both comic fans and horror buffs. it worked for awhile and did lead to some petty solid films like the Blade trilogy, Hellboy, Constantine, and, the subject of today's review, Spawn. Spawn might not be the best of movies but it was kind of cool for the time. The toys were also pretty remarkable. Around 6 years ago in a review of the Jessica Priest figure from the film, I spoke about receiving this figure of Spawn for my fourteenth birthday from a friend. I've always held on to him; while I've never been a huge Spawn fan, I've always loved this toyline. Let's take a look at a representative from the horror/ comic surge of the 1990s after the break... 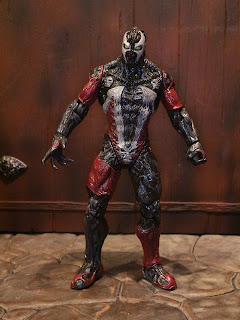 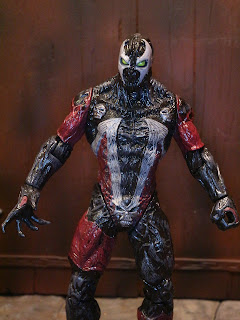 * Overall I still think Spawn is a pretty cool looking figure but, back when this guy was released in 1997, he was incredible. Seriously, McFarlane's stuff was as impressive then as stuff from NECA and Mezco's One:12 Collective is today. Every time they released something new it seemed like they were raising the bar. Good times! This is the "standard" version of Spawn and while he doesn't have a cape, he does have a really fantastic sculpt that shows off the weird, sinewy look of the character. He also looks kind of slick, as in he has a wet look to him that really showcases the sleekness of the sculpt and the character's exoskeleton-like armor. . Seriously, there's still some nice work here over 20 years later. I believe there's a spiky variant of this guy, too, in case you're wondering. 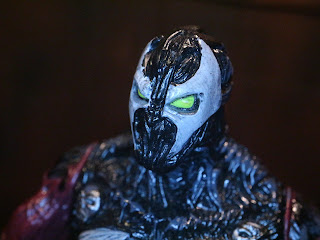 * The portrait is quite good. While the comic based Spawn figures (well, at least the early ones) had smooth masks, like standard superhero garb, movie Spawn's is sinewy here, too, with armored late across the face. I'm still a fan of the eerie green eyes, too! It really shows off Spawn's necrotic energy! There is a variant of this figure that has an "unmasked" Al Simmons head, showing off his ravaged, hamburger like face (not the Michael Jai White face). Usually it's referred to as Hamburger Spawn. (It looks to be a different headsculpt than Burnt Spawn, by the way). 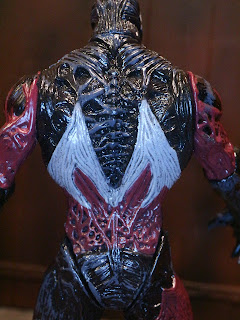 * Here's a close up of the back of the figure to show off more of the detail. I love the weird, sinewy look of the figure. While Spawn's body seems armored in the movie, the organic nature of his costume is on full display here. The paintwork definitely adds another layer of atmosphere to the toy. 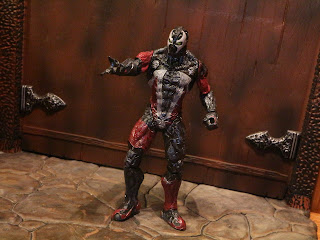 * Compared to today's toys Spawn isn't that well articulated but compare him to other toylines of the time and Spawn was doing alright. The Spawn: The Movie toys were also much more durable than most other McFarlane toylines at the time, so this guy was made for play. Seriously, I definitely still pick this guy up from time to time and mess around with him. He's well made! 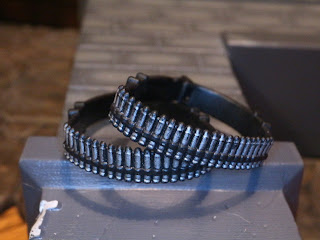 * Off hand, I think Spawn wears some ammunition filled bandoliers as the scene where he busts through the ceiling of the party where Jason Wynn is hanging out. They're two rubbery straps with silver painted ammunition (any paint wear is from me having these and playing with them for years). 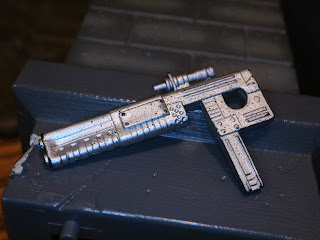 * The packaging advertises that Spawn comes with "Combat Assault Weapons" and that is definitely not a lie! Spawny guy comes with two weapons, the first of which is a small submachine gun that fit perfectly in his left hand. I've always liked this design as while it seems a bit futuristic, it also seems rather simple and spartan in design. I'm pretty sure it's the same submachine gun that Jessica Priest comes with, too, just FYI. It was a weapon design for the film based on a Cobray M11/9 and most of the A6 personnel in the film use them. 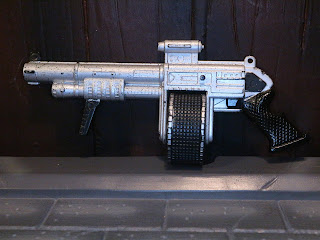 * The second weapon is massive. It's some sort of weapon that looks like a cylinder shotgun or a grenade launcher. Something similar to this does appear in the film. It's a very cool looking weapon though it seems rather oversized. Sill, the drum actually rotates and the weapon has a few paint applications to bring it to life. 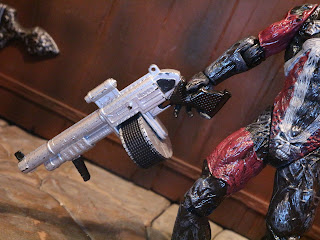 * My only complaint is that the cylinder assault weapon is so huge Spawn has a tough time wielding it. It's designed to fit in his left hand (there is a trigger piece that his finger fits under) but if you move him around at all the rifle is going to fall out. 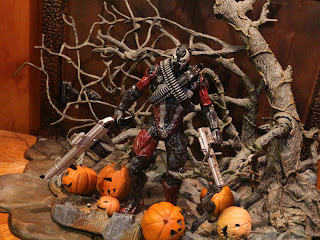 Maybe Spawn isn't the scariest guy in horror cinema but he has a few reasons he's on this list. First, I'm kind of nostalgic for this figure and Halloween is often fueled by nostalgia, right? Second, horror comic book films really helped get comic films to where they are today, so there's a lot of significance there. Third, I already owned this figure, so it was convenient. Truth. I really think Spawn is a Great and a 1/2 figure. I like him quite a bit and while I've never completed the line (I own five of the basic figures), I still have always kept what I own on display. They have a very cool charm for some reason.


If you're a fan of Spawn/ Al Simmons, check out my reviews of the Spawn: The Movie Al Simmons and Burnt Spawn.