The Scream of 31 Days of Toy Terror: Pennywise (with Beaver Hat) #779 from It: Chapter Two from POP! Movies by Funko 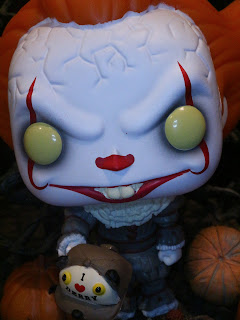 Holy moly! It's a Stephen King POP! trifecta! I assure you, this wasn't planned! It was just a happy accident! Today I'm checking out a cool POP! vinyl I was surprised with for my birthday back in September: The FYE exclusive Pennywise with Beaver Hat. Coming from the excellent It: Chapter Two, this version of Pennywise features the character holding one of the "I Love Derry" hats from the film that's meant to look like a beaver. It's an interesting looking POP! featuring a cool prop from the film and I was pretty surprised to get it as a gift. Let's take a look at Pennywise for today's installment of The Scream of 31 Days of Toy terror, shall we? 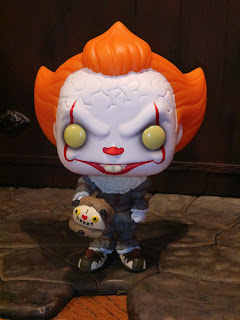 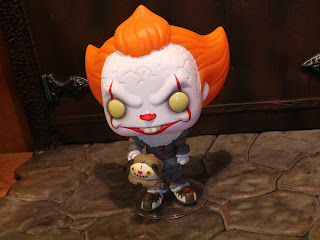 
* Pennywise is in kind of a standard pose here with the beaver hat outstretched in his right hand. This is the only POP! of Bill Skarsgård's Pennywise I own so I'm glad it's kind of a standard version of Pennywise. He stands up well on is own and has the same swivel head as most other POP! vinyls. 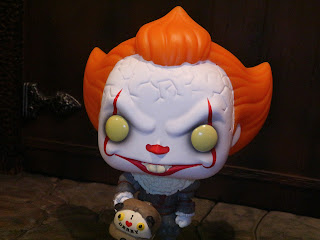 * The headsculpt is great, particularly the hair. Pennywise doesn't look terribly different between the movies although I think the lighting usually makes him seem a bit darker color-wise. The hair is awesome, though. I love the big orange hair in POP! form! 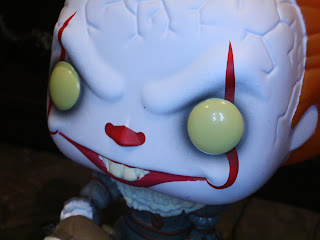 * When you look up close there is actually a lot more detail here than on your average POP! vinyl, particularly the cracking paint on Pennywise's forehead and the dark rings around his eyes. It's pretty solid work! 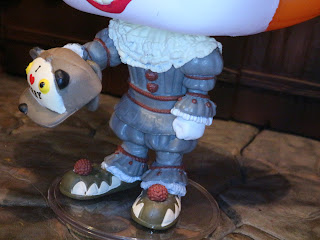 * Funko did a nice job on Pennywise's outfit. His costume is very detailed with lots of paint applications and even a nice dark drybrush everything to make the clown look just a bit grimier than usual. 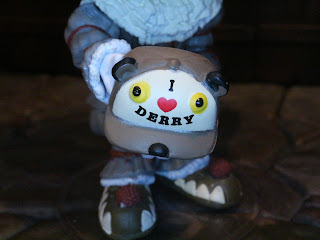 * Since Derry started as a beaver trapping camp ("Still is, am I right boys?"), the hats sold at festivals actually look like beavers. I love the goofy design of this hat! It's so ridiculous and Funko captured it really well here. It's just an odd, funny design and it really fits well with the sinister Pennywise figure. 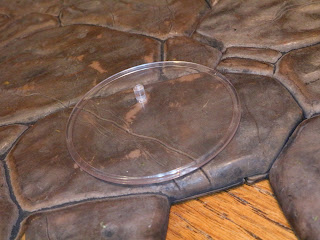 * Interestingly, Pennywise comes with a display stand. He stands fine on his own so I'm not completely sure why he has it, but I'm OK with it. Maybe Funko thought his heavier hair might cause him to tip backwards? He looks fine on it, though, and if you don't use it you could give it to another toy. 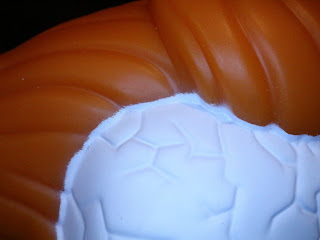 
* The paint line between the hair and the makeup is a little bit messy. The makeup kind of runs up into the hair which, while possibly something that would really happen to a clown, doesn't look quite right on a stylized toy like this. 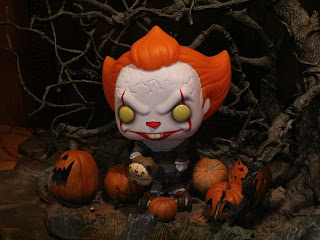 Funko has made dozens of Pennywise toys from It and It: Chapter 2, but this is the first one in my collection. The beaver hat definitely sell it, as it's just such an odd, goody detail and I love it. Pennywise is a Great POP! vinyl and another fun addition to my horror shelf of POP! vinyls (which I keep on the bookshelves along with my horror book collection). Pennywise is now in good company alongside a few other horror characters. Funko has put out plenty of Pennywise vinyls, so take your pick, but this one is mine. Pennywise is everywhere this Halloween season, so look out! Beep beep!

For more POP! Movies reviews, check out the following:
Danny Torrance #458 from The Shining
Dr. Ian Malcom #552 from Jurassic Park
Gage & Church #729 from Pet Sematary
Jack Torrance #456 from The Shining
Michael Myers #03 from Halloween
Norman Bates #466 from Psycho
Pennywise #55 from It
Sam #57 from Trick 'r Treat