The Scream of 31 Days of Toy Terror: Electronic Eye of Sauron from The Lord of the Rings Trilogy: The Return of the King by Toy Biz 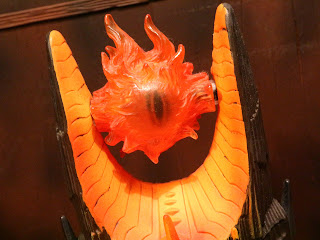 One of the things I love about 31 Days of Toy Terror is that it really gives me a chance to go back and grab some really cool, random figures from the past. Last Christmas I showed off my 12 favorite toylines of all time and one of those lines was Toy Biz's incredible The Lord of the Rings line based on the Peter Jackson trilogy from 2001-2003. Toy Biz released an incredible and long running line of toys based on the film. Not only did Toy Biz release a ton of figures, they also released lots of trolls, orcs, goblins, and other evil beings from the world of Middle Earth. Being a huge J.R.R. Tolkien fan, this was a dream come true. The Lord of The Rings films have some incredible creature designs and frightening moments to them and one of the most interesting to me is the Eye of Sauron. While the books speak about the Eye of Sauron, the film had to find a way to convey the literal presence of Sauron during the War of the Ring so they went with an actual giant eye. So that's what we're checking out with today's installment of The Scream of 31 Days of Toy Terror: The giant, flaming eye of a dark lord! Let's check out the Electronic Eye of Sauron after the break... 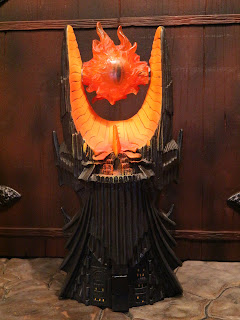 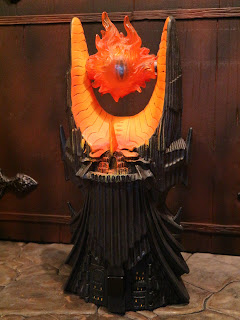 * The Eye of Sauron is one of the most interesting action figures I've ever seen released. For one, he's not really an action figure but more of a... glorified accessory? I mean, he is a character (or representative of a character at least) but the eye of Sauron is also positioned on top of the massive tower of Barad-Dûr. Secondly, the tower isn't in scale with the rest of the line but has been made in a smaller scale so it would fit in the packaging of the standard figures in the line. It might seem odd but honestly, it was a pretty cool way for Toy Biz to get the Eye of Sauron in the line at a reasonable price. I liked the unorthodox attempt and still think it was a clever idea on Toy Biz's part. 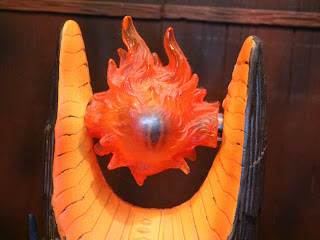 * The eye itself looks just like the eye shown in the films and looks quite a bit like the eye mentioned in the books, which Frodo saw in Galadriel's mirror. The pupil is a separate piece inside of the orange, flame-like eye that is molded in translucent plastic. There are actually a few shades of red and orange here to give things a bit more detail. The eye is attached via a rod at the top of the Tower of Barad-Dûr, allowing the eye to swivel up and down. 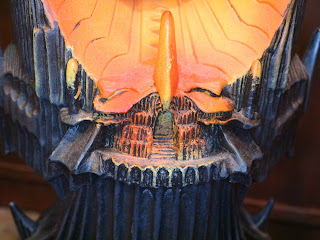 * I love the little details on the tower such as the various stairs and balconies. These nicely show off the scale of the toy. The paintwork is a bit sparse here, but that seems to match the tower's aesthetic in the movie. There's lots of orange here, too, to show the glare from the fiery eye of Sauron. 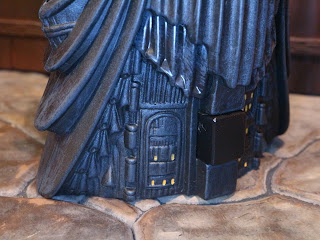 * All around the base of the tower are more windows and structures. They even have little paint applications to show off the lights inside of Barad-Dûr. 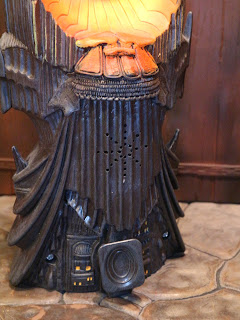 * The Eye of Sauron doesn't have "Electronic" in its name for no reason: It actually lights up and talks! Turn the little black knob at the bottom (see the picture to the right) and you can make the eye swivel up and down and have the pupil look left and right. Oh, and it talks. Yup! The Eye of Sauron actually says "I see you" in a very creepy voice. I love it! Guess what! This still has the original batteries in it! Yup! I bought this new in 2005 and it still works just great! 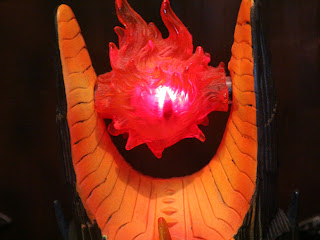 * And here's the light-up eye! It's tough to catch the light-up effect fully with a camera, but I think you get the idea. Spooky! 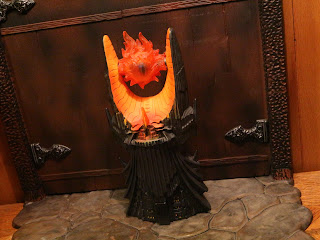 I think some collectors probably find the Eye of Sauron pretty lame but I think it's one of the most unique and clever releases in Toy Biz's massive The Lord of the Rings line. It was a great way to release a toy of the Eye of Sauron without having to make a crazy oversized toy. The Lord of the Rings trilogy might not be a "horror" series but with lots of creepy creatures and Peter Jackson's horror pedigree, there definitely are some terrifying moments from the world of J.R.R. Tolkien brought to life in it. The Eye of Sauron is a Great and a 1/2 toy of one of the most memorable images from one of the best film trilogies of all time.

If you're interested in more of Sauron, I actually reviewed the Lego Dol Guldur Battle set which included a figure of the Necromancer, one of Sauron's many forms.

For more figures from Toy Biz's The Lord of The Rings Trilogy line, check out the following:
The Two Towers
Prince Theodred