The Scream of 31 Days of Toy Terror: Gage & Church #729 from Pet Sematary from POP! Movies by Funko 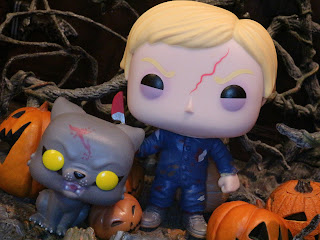 Guess what? We're kind of on a mini-streak of creepy Stephen King kids! Today I'm checking out Funko's POP! Gage & Church from Pet Sematary. Based on the 1989 film adaptation (and not the 2019, which was pretty solid, too), Pet Sematary terrified me as a kid. It was one of he first horror movies I ever saw and both Gage Creed and the sister, Zelda, who yells "Rachel! Rachel" terrified me. True story! I had a friend in middle school and one day while we were hanging out, maybe at our neighborhood I ran over to his house to grab something. I think his dad had run to the store or something because no one else was there. As I walked upstairs I heard a voice say "I want to play with you!" I guess a TV had been left on and Pet Sematary was playing but, at the time, I just bolted. It freaked me out! Anyways, now I own a cutesy vinyl of that kid and his undead cat which I'm going to stick on a shelf neck to Jack Torrance from The Shining and Lucy in her witch costume. Weird, huh? Let's hop on and see how Gage fares in The Scream of 31 Days of Toy Terror... 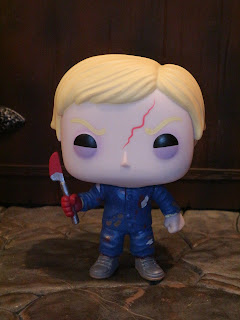 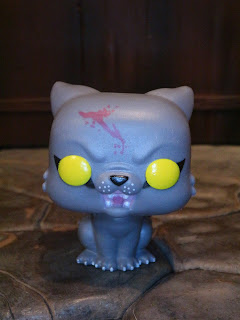 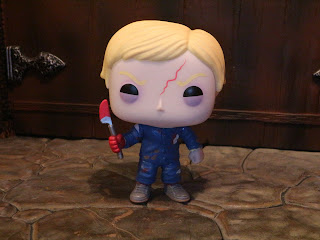 * Like Danny Torrance yesterday, Gage may be a POP! that takes you a second to recognize. It's all there, though: The weird blue suit he was buried in, the wicked looking eyes, and the scalpel. Oh, yes, the scalpel is here. Gage is a pretty creepy looking POP!, he stands well on his own, and he of course features the swivel head that most other POP! vinyls have, too. 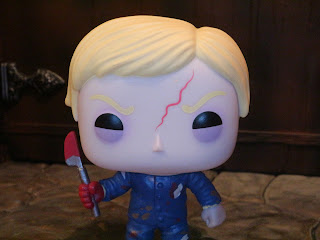 * The likeness on Gage Creed (no relation to Apollo) isn't bad here, especially because of the very menacing looking eyes, and the bloody streak across the head. 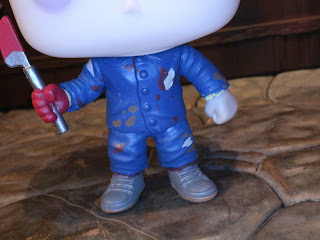 * Gage Creed is dressed in the little blue suit which he was buried in, which, believe me, is disturbing on so many levels. Seriously, since having a parent I'm definitely way more sensitive to that kind of stuff. I have a daughter, so the 2019 Pet Sematary was excruciating for me to sit through until the daughter came back. When I realized that she was mean, made nasty faces, and spun around breaking stuff all the time, though, I wasn't phased: That's a normal day with a little kid. 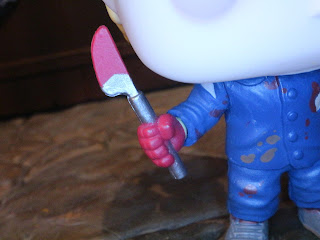 * Yes, Gage has the scalpel. The freaking scalpel. It's a bit oversized, but otherwise it'd be way too small to make out, wouldn't it? It's got some blood on it (as does Gage's hand) and it's just looking for an Achilles's tendon to cut! Yeesh! That makes me cringe just thinking about it! 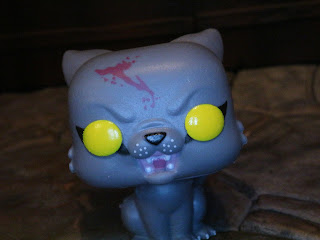 * While you might consider him an accessory, the box gives Church the cat equal billing, so I'm counting him as a second character. Two for one, right? Church (no relation to the chicken place) has menacing yellow yes, blood on his head, and he stinks. OK, he doesn't really stink. He should, though. I demand more scented POP! vinyls. 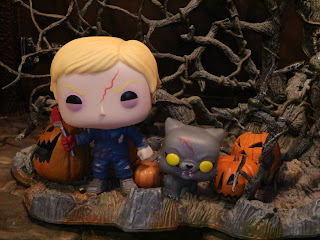 Considering that you're getting two POP! vinyls here, this is a pretty cool set. Both Gage and Church are quite cool and definitely stand out as some lesser known, but still fairly frightening, horror characters. Whether you set them up at Halloween or keep them on your bookshelf next to your horror books (like your old pal Barbecue17!), these two surely have a spot in your horror collection. I imagine that Funko released these to coincide with the release of the 2019 Pet Sematary earlier this year, which didn't get any POP! vinyls of its own that I'm aware of. This is a Great and a 1/2 set all by itself and these two revenants can stand on their own just fine!


These are the first two action figures of Gage Creed and Church that I've reviewed. For more POP! Movies check out the following:
Danny Torrance #456 from The Shining
Dr. Ian Malcom #552 from Jurassic Park
Jack Torrance #456 from The Shining
Michael Myers #03 from Halloween
Norman Bates #466 from Psycho
Pennywise #55 from It
Sam #57 from Trick 'r Treat
Posted by Barbecue17 at 10/19/2019