Action Figure Review: Modulok D from Masters of the Universe ReAction by Super7 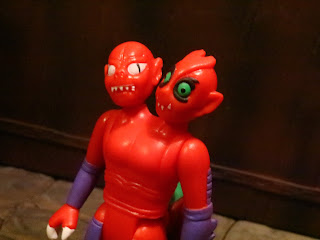 Today I'm checking out the third and final figure from Super7's PowerCon 2019 offerings for the Masters of the Universe ReAction line and this time it's Modulok with both heads and all four legs. Super7 called this version of Modulok version D which was a little odd as version A and version B had been released, but we had no version C. Version C, which is a slight variant of this release, has actually been released as a NYCC 2019 exclusive, along with a Top Toys variant Modulok with green arms. This version, however, it based on the vintage Modulok figure from Mattel. While Modulok could have an endless number of combinations, this version shows a pretty standard look: Two arms, four legs, a tail, and two heads. It's not a perfect recreation of the vintage toy but it's fairly close and definitely makes for an interesting retro styled action figure. Let's check out Modulok D after the break... 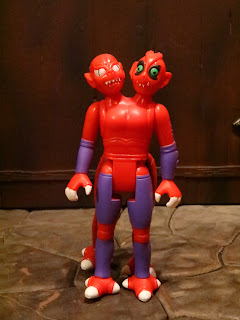 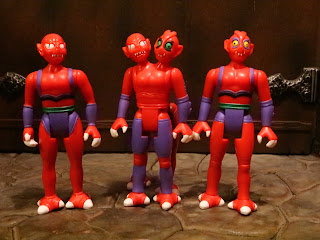 * Modulok D is in the center with Modulok A on the right and Modulok B on the left.  While the body and front legs are different, both head sculpts are reused as are the arms (from Modulok B) and the rear legs (from Modulok A). This guy is really pretty unique and, looking back, makes me realize that Modulok A and B had more differences than I realized. 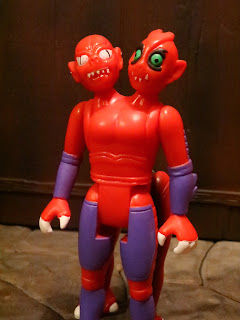 * I like the two headed body. It's a bit wider than the standard body for Modulok A and B and definitely reminds me of the torso from the vintage toy. He's also got lots of armored bits, which are accurate to the vintage toy. There's a lot of red here but the paintwork that's here is neat and clean. 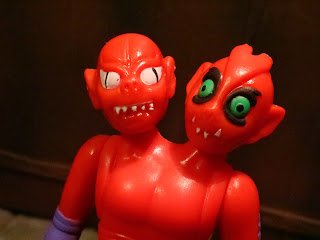 * You get two portraits here, instead of one! The left head is nearly identical to Modulok A's head but Modulok B now has green eyes with black...eye rings? What would you call those things? Both heads pivot just fine and they don't clash into each other at all. 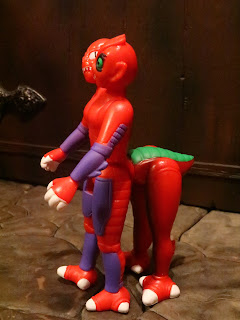 * I love the look of the extra set of rear legs. It definitely makes for a cooler looking figure. This is definitely a figure that stands out among vintage Kenner styled figures, for sure. You gotta dig the green tail! 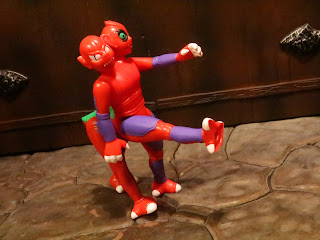 *  with Modulok's unusual body type, if you've ever picked up a retro figure like this, you know what to expect: swivel joints. Modulok feels very well made and sturdy. He does have more than your average figure, though, due to an extra set of legs and one more head.  Super7 has been very consistent in the quality of their ReAction lines over the past couple of years and has definitely perfected the style. 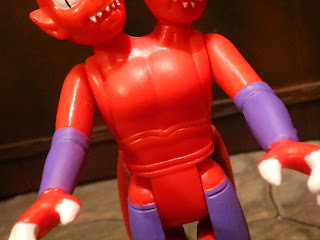 * While his entire torso is left red, probably to reflect the vintage figure's torso, you can still see straps and such on his torso. Just choosing to not paint a detail doesn't make it go away, Super7! 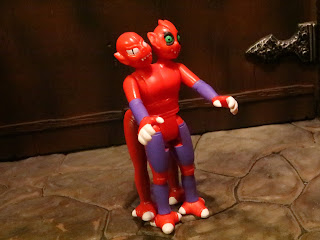 Despite how cool he should be (he is still a Good and a 1/2 figure) I'm a little disappointed, as Modulok doesn't get cool card art (this is about the only toyline I collect that I return to the package after reviewing them), he has unpainted straps on his chest, and he still doesn't get his vintage weapon. This guy should have been one of the best ReAction figures in the line. He could have even had removable heads! He doesn't, though, and while he's cool, he's a bit of a disappointment. I'm hoping Modulok C is a bit more impressive as I ordered him yesterday, so expect a review of him soon, too.


If you're a Modulok fan, check out my review of the MOTUC Modulok and the ReAction Modulok A and Modulok B.