Action Figure Review: Trap Jaw from Masters of the Universe by Super7 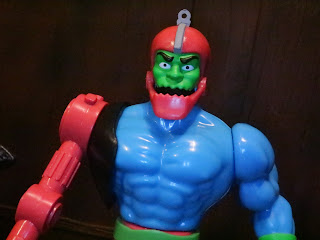 Today I'm checking out the last figure from series 3 of Super7's neo-vintage Masters of the Universe line and this time it's the dastardly Trap Jaw! While Trap Jaw wasn't released until the second series of vintage MOTU figures in 1983, he's always held a place as one of Skeletor's main baddies. That's probably due to both his prominence in the Filmation animated series and the strength of his vintage toy. Trap Jaw has always been an amazing figure and Super7's version recaptures most of what made him so incredible while giving him the look of his popular Filmation counterpart. Let's take a look at Super7's Filmation influenced Trap Jaw after the break... 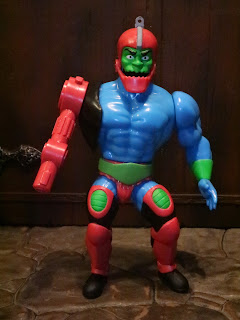 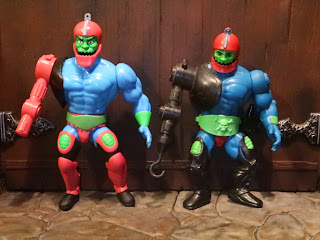 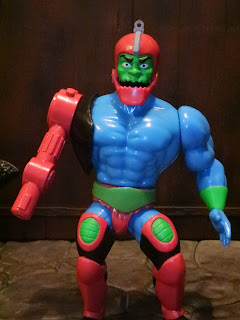 
* Trap Jaw looks fantastic in those vibrant Filmation colors, doesn't he? Super7 did an excellent job matching the colors here and adding in the elements that differentiate the vintage design from the cartoon design. Little details such as the plain belt and the smaller shoulder harness definitely help up the accuracy of this guy. Plus, he's still just a fun design on his own, too. Blue and green space pirate guy with a cybernetic arm? Who'd pass that guy over if you were picking players for dodgeball? 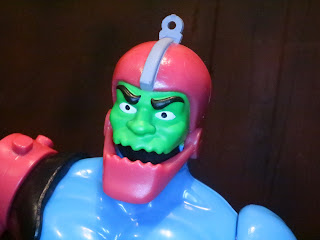 * The headsculpt is excellent. While some of the "human" heads have been so-so, Skeletor's minions have been excellent and Trap Jaw is another win. The eyebrows are perfect, as is the jaw. It's hinged and can move up and down, too! He also has the loop on his head so that he can conceivably glide down a piece of string. Trap Jaw was loaded with play features, wasn't he? 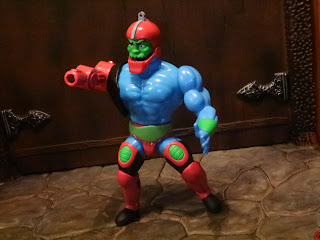 * Trap Jaw's articulation is extremely similar to his vintage counterpart with the exception of his swivel/hinge hips (these take the place of the rubber bands of the vintage toys). He stands well, feels solid and sturdy, and looks great with his gadget filled arm loaded with some menacing tool! 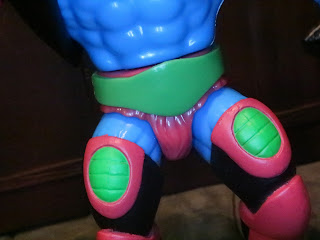 Most of Super7's neo-vintage figures feature spring loaded swivel waists. I still have no idea what sorcery causes these figures to be able to punch like this but it works pretty well. It's fun to have a genuine action feature in a MOTU figure again, allowing Trap Jaw to hook and blast his foes with just a turn of the waist. 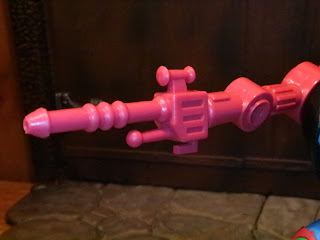 * Trap Jaw comes with the same three weapon attachments for his robotic arm that the vintage toy came with. First up is his laser cannon! This one is my favorite, by the way. 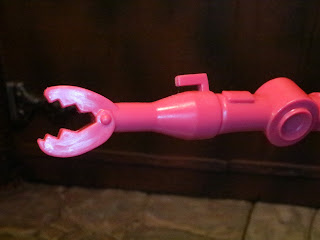 * Next up is his claw. It doesn't actually open or close but it looks nice. 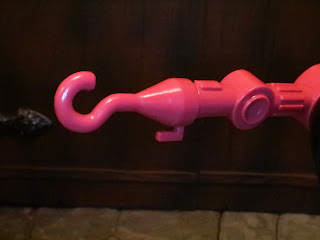 * Last up is the hook, which is probably Trap Jaw's most iconic piece of equipment. In case you're wondering, the new pieces will fit on the vintage figure but the vintage pieces won't fit on the new figure. 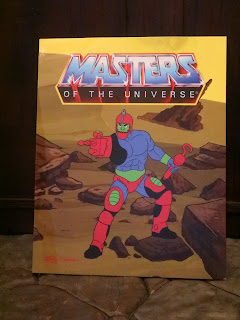 * I really am quite fond of the art cards included with these figures. They kind of mimic the look of the minicomics in the vintage packaging but they're a simple cardstock art print. On the front is a really cool image of Trap Jaw from Emiliano Santalucia while the back features an image of the Filmation model of the character and some text. 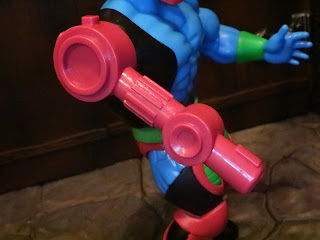 * I'm kind of surprised that Super7 went with the longer, vintage styled arm rather than the shorter arm from the Filmation cartoon. It's not really a flaw but it is an inaccuracy that just seems odd. 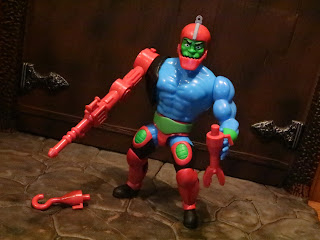 I gotta say that Trap Jaw is one of the best figures released by Super7 in this line. He's an Epic toy and I'd put him alongside Orko as one of the figures that really feels like an improvement and/or a must have for the series. Sadly this line is going to be ending soon to make way for Mattel's Masters of the Universe Origins line (though I am excited for those) but there are a few more coming. I'll be reviewing the Statue Variant series shortly and series 4 in the coming weeks.