The Scream of 31 Days of Toy Terror: Pennywise (Well House) from It by NECA 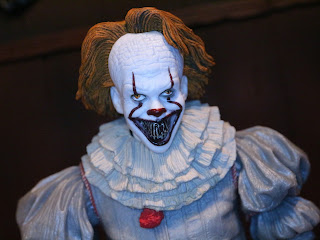 Since writing a review for each of October's 31 Days is rather time consuming, I do start writing these as early as July. Today I'm checking out NECA's Well House version of Pennywise from It and, as of writing this, I just saw a Thursday night preview of It: Chapter II last night. By now I'm guessing anyone who cares to has seen the film. Wow, right? The casting of the adult versions of the Losers was some of the best casting I've ever seen. Uncanny, really. Of course, Pennywise had lots of creepy new disguises as well. NECA hasn't really shown any new figures for the second film yet but I'm hoping that by the time you're reading this something has floated up from them, even if it's just some news about new toys or something. This version of Pennywise is from the middle parts of the first film, particularly from the scene where the Losers watch the film on the projector and from the first time the Losers go to the old Well House 29 Neibolt Street. While the general body is the same as the original figure, GameStop exclusive, and Dancing Clown versions, the multiple new portraits are what will get your attention here. As always, NECA does excellent work with the different Pennywise visages and fans will probably end up wanting all of them. Let's check out Pennywise (Well House) after the break... 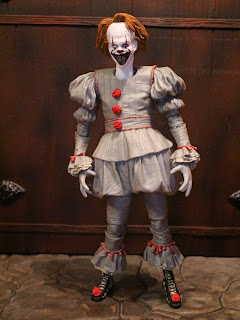 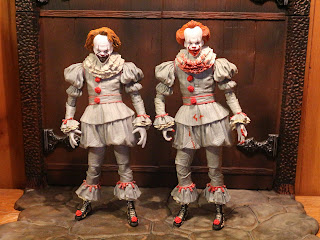 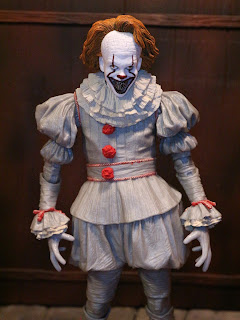 * I've looked at this same body a few times so far. It's still good but I'm running out of things to say about it. The new heads are the selling points here! 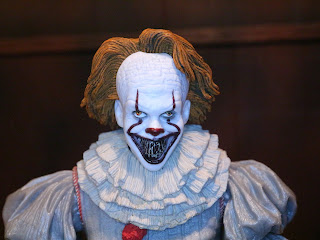 * First up is a Pennywise portrait with massive teeth. Check out those chompers! I love the oversized, hideous teeth. The paintwork is so good on these! NECA just does a fantastic job with this license and while I'd love to see them reach out and do figures of the more monstrous Pennywise disguises, you can't argue that the old dancing clown himself isn't the main draw. 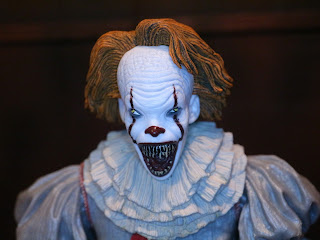 * Next up is a portrait where he's in the middle of exposing his full mouth. I love how the eyes are rolling back. Is this expression from when he's preparing to eat Eddie after he falls from the second story of the house into the kitchen? 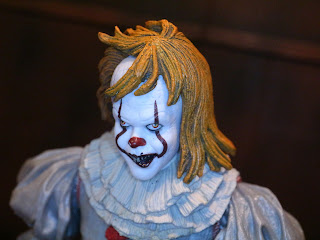 * The third headsculpt is very scene specific: It's from the film footage the Losers watch in Bill's garage. It looks like they're watching a video of Bill's mom with her hair blowing but, as the hair covers her face, it turns out it's Pennywise underneath. The hair looks cool, and kind of in motion, though the sculpt itself definitely has more limited potential than most other sculpts here. 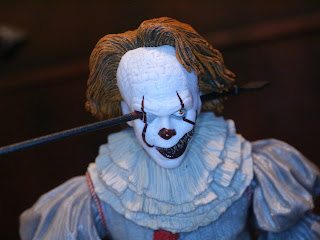 * The last headsculpt is another very scene specific look, although it's a cool one: It's from the scene in the Well House where Beverly impales Pennywise's head with a fence post. I love the look of this! The fence post is a separate accessory (you'll have to run it through the eye and left side of the head) which is great. Pennywise also looks rather pissed and stunned here, too. 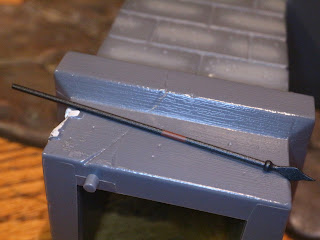 * And here's the fence post by itself. It's a simple plastic sculpt. The head looks really sharp, though. It's best used with the headsculpt though it's kind of cool to have it as an extra item, too. Remember: It can kill monsters! 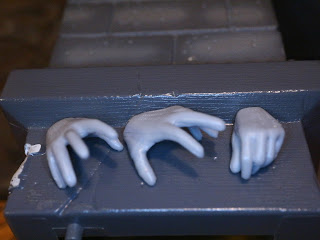 * Pennywise comes with four interchangeable hands. Three of them are pretty standard: A pair of gripping hands and a left hand with a tight grip. 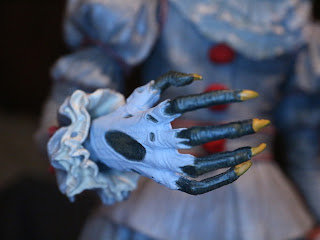 * The really cool hand is an alternate left hand with Pennywise's exposed claw. Dang, does this look great or what? I remember my dad having the hardcover version of It on his nightstand when I was a kid and the cover always creeped me out (I actually have the exact same book on my shelf about three feet away from me as I'm writing this. My dad gave it to me earlier this year while paring down his book collection!). 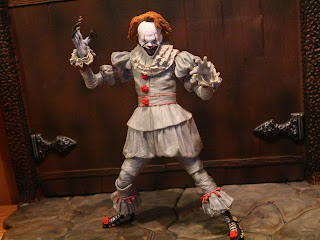 * Pennywise moves the same as the previous releases. NECA is company who continually improves their product and their articulation is an area where they just keep getting better and better. Pennywise has as much or more articulation than your average Mezco or Marvel Legends figure and even includes elbow and knee joints that are very well hidden s well as an excellent balljointed neck hidden under his ruffled collar. You can get some great poses out of Pennywise to terrorize the other toys on your shelf. 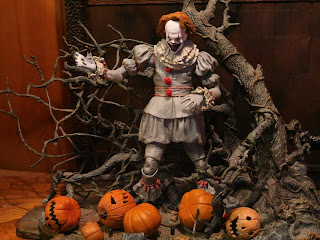 For the price, Pennywise is another Epic figure. Yeah, if you're not a huge fan of the character you may not feel the desire to own multiple versions, but any version you pick up is probably a winner. The headsculpts on this one and the Dancing Clown version are just aces, though. This one is just fantastic and gives you some really great options for creating more creepy displays on your horror shelf. For years now NECA has proven themselves to be the best company around for horror toys. I'm always excited to see what they have in store for us next...

For more figures from It (2017) check out the following:
Pennywise (The Dancing Clown)
Pennywise (GameStop Exclusive)