The Scream of 31 Days of Toy Terror: The Curse of Michael Myers from 5 Star: Horror by Funko 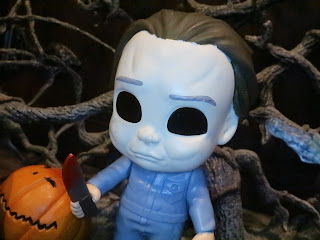 We're only a few days away from Halloween and guess who's back? Yup! It's time for another review of Michael Myers! Actually, according to the package, this figure is called "The Curse of Michael Myers" which is subtitle of the sixth film in the series: Halloween: The Curse of Michael Myers. That's kind of weird to call the figure by the title of the film, right? It's gotta be a licensing issue of some sort. For one reason, the Halloween rights are kind of bizarre. Another reason, why would someone pick the sixth Halloween film for making a figure that's a fairly generic Michael Myers? It's not like there is anything that makes this version of Michael a specifically Halloween VI version of the character. Weird! This figure is from Funko's 5 Star offering of products. The 5 Star figures just started showing up last year and they have some of the qualities of other lines like POP! vinyls or Dorbz but they actually have articulated arms and accessories. I haven't purchased any Funko 5 Star figures yet but Michael convinced me to dive in. Let's check out The Curse of Michael Myers after the break... 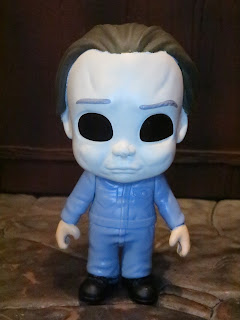 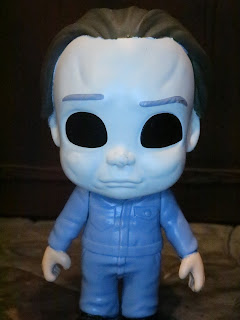 * The 5 Star figures have somewhat of a cutesy style, but they're definitely not as stylized POP! vinyls or Dorbz. They remind me more of the style of the Cryptozoiz minis, or maybe even Mystery Minis. Michael has a slightly larger head with a slightly smaller body. The work suit is nicely detailed though it's a very, very light blue. That might be correct looking at film stills, though, as Michael's mechanics suit does seem a bit lighter in that film than in most others. 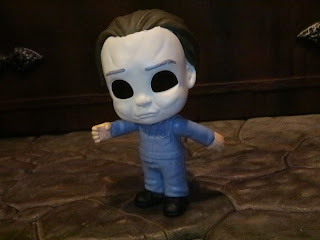 * The 5 Star figures have swivel heads and swivel arms, so you do get the opportunity to pose each figure a little bit. The figure does seem to be of a fairly nice quality, though, so I imagine that most of these would be great for kids. I mean, maybe not not Michael Myers, but the 5 Star range also has Harry Potter, DC Comics, Stranger Things, and The Nightmare Before Christmas figures, all of which would make good kids toys 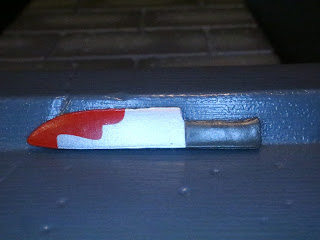 * Michael Myers only comes with one accessory: A large kitchen knife. It's covered in blood, too, which makes it extra grisly! 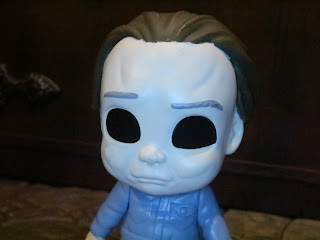 * I'm of two minds about Michael's portrait. There's definitely some nice work on the features on Michael's mask, such as the prominent cheekbones and the large, solid black eye holes. There's a lot of character here for sure.

*I'm not sure I like that the Mask actually has an expression, though. Look: Michael actually has one eyebrow raised. On a mask. It's kind of funny, but also just seems strange to me. There's also some of the plastic showing through the white of the mask. 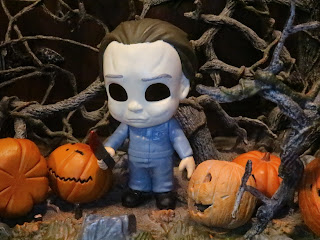 The Curse of Michael Myers (cause that's what the package calls him) is an OK little figure. I do like the format though I'm not completely sold on the Michael Myers likeness. It'd have been nice if he came with another accessory as well, as most of the figures seem to come with two extras. If you're a Michael Myers collector or just want a cute little version of the character for your desk or something then this isn't a bad little pickup for $10 bucks or less. He's a Good and a 1/2 little collectible that is honestly not too far off from a traditional toy. It's kind of like a mixture between a Funko POP! and a ReAction figure, actually. Maybe that's a good way to describe it.