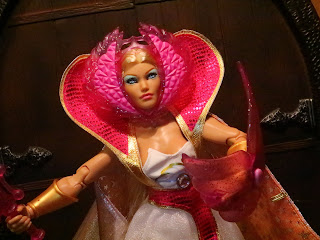 I'm still making my way through the PowerCon 2019 exclusives and today I'm reviewing what might actually be the most impressive of the lot: The 1/6th scale Starburst She-Ra from Mattel! Back in 2016 Mattel released an amazingly cool 1/6th sale She-Ra in her classic outfit (which also came with two other outfits) and this year Mattel released this follow-up figure. Starburst She-Ra is not only an impressive looking figure but she comes in incredibly cool (collector friendly) packaging that captures the look of the vintage Princess of Power packaging. Mattel's definitely seems to have big plans for the MOTU property over the couple of years and they've had a solid showing this year, too. You know what else is kind of an interesting observation? I'm pretty sure this is the first year ever that Mattel has put out more She-Ra product than He-Man and the Masters of the Universe product! Yeah, Mattel released the PowerCon MOTUC figures, the Origins set, and has the upcoming Masters of the WWE Universe line coming out soon but if you factor in this and the She-Ra and the Princesses of Power line into the equation 2019 is truly the year of Princess Adora and the Great Rebellion! Let's check out Satrburst She-Ra after the break... 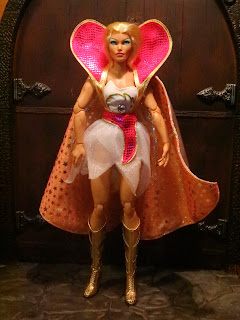 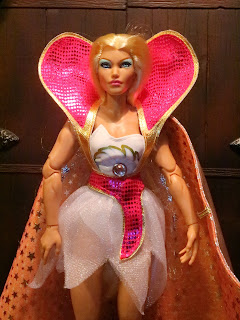 
* She-Ra looks incredible in her Starburst outfit. The outfit is quite complex and is made from three separate pieces: Her pleather unitard with a diamond on the front, a shiny, transparent skirt, and a shimmering belt and collar combo with attached cape. Her bracers are also removable (just remove her hands), too. The clothing is of a very nice quality and definitely looks really cool. If we had seen Starburst She-Ra in MOTUC, I imagine this is what she would have looked like. It's very faithful to the vintage look but it has just a bit of a modern edge. 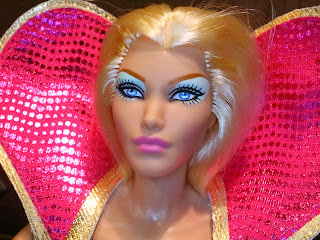 * I think the headsculpt is reused from the 2016, though I'm not 100% sure. I really do like it, though. She-Ra is quite lovely with a rather stern expression on her face. Again, it's a nice mixture of the vintage depictions of the character with a modern edge that just works really, really well. 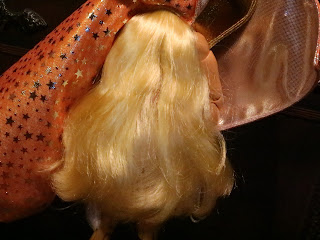 * She-Ra features real rooted hair that's around 7 inches long. It looks great and is fitting for the Princess of Power. She doesn't have a comb, though. Time to put the MOTUC comb weapons to use! 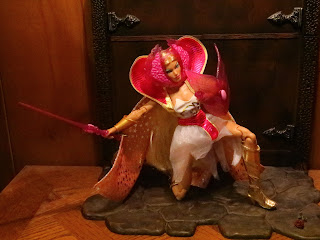 * She-Ra's articulation is excellent. Seriously, I'm not sure if this body is unique to this figure or is a modified Barbie body, but it's great. It features much more articulation than the She-Ra and the Princesses of Power doll as it includes things like hinged toes and double hinged elbows and knees. She-Ra can take some incredible battle poses and looks fantastic doing so! 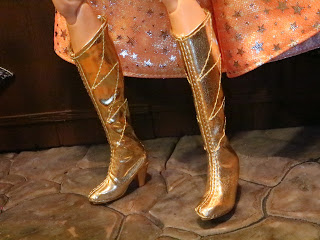 * The boots are fantastic. They're gold, very detailed, and add another 1/2 inch to She-Ra's height. 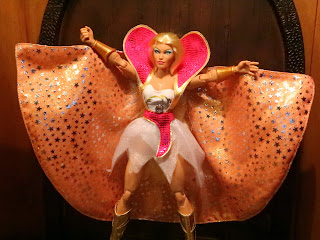 * Based on the vintage Starburst She-Ra variant, this figure also includes the star studded cape. It's a fantastically fabricated cape that does a nice job of capturing light to offer a reflective shine. There are some small loops on the top of the cape that can attach to She-Ra's wrists (well, you remove the wrist pegs and slide them through the loops). 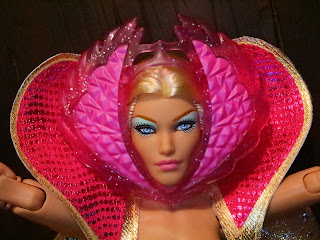 * She-Ra includes her tiara/ crown/ mask molded in translucent pink plastic filled with a wave of glitter. Seriously, I love Masters of the Universe and the fact that you can have a fabulous, sparkly, pink clad princess atop a rainbow colored alicorn right alongside a menacing, skull faced barbarian lord of destruction. Of course, that same princess can also be a skull masked wearing warrior as well, and that skull faced guy can be filled with the Christmas spirit while falling in love with blue dog. Anyways, She-Ra's tiara can be worn two ways, the first of which is with her full face exposed. 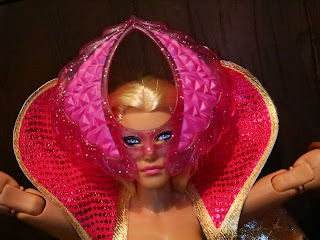 * The tiara can flip to serve as a more traditional mask with a large crown-like top. I like this look although it does tend to be a bit tougher to get it balanced just right. 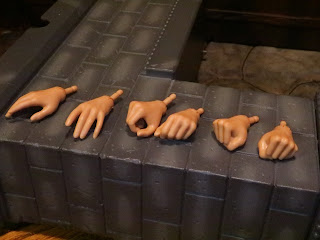 * She-Ra comes with six hands that change out quite easily. She has a pair of relaxed hands, a pair of grips for holding her sword and shield, and a pair of fists for punching the baddies. 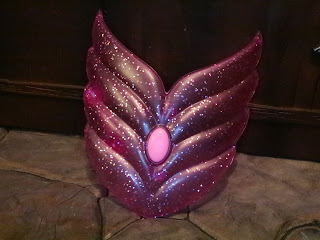 * She-Ra's is also molded in the same translucent plastic as her mask/ tiara. There's a loop for her forearm on the back and a handle to help her wield it in battle. 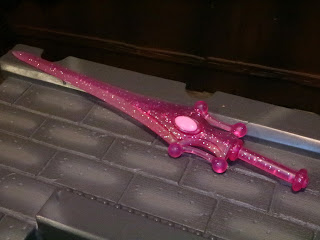 * Of course, She-Ra also comes with a starburst filled version of the Sword of Protection. It's deinitely Filmation styled and it looks fantastic. I love the translucent pink. It's also legitimately pointy, so be careful! 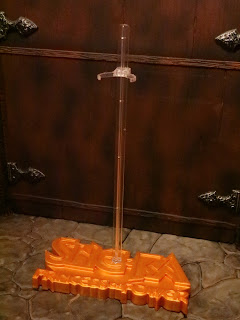 * To help display Starburst She-Ra on your shelf she comes with a display stand. The stand is molved in gold plastic and says "She-Ra: Princess of Power" while the stand is a translucent plastic rod. It won't allow for any crazy poses but it does help keep her standing, which is needed due to the weight of the cape and her high-heeled boots. 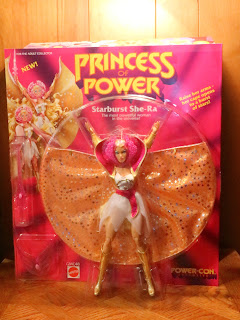 * Starburst She-Ra comes in some incredible packaging. It shows off the figure really well, looks amazing on display, and is completely collector friendly. Seriously, the plastic blister is held to the very sturdy cardboard backer via small tabs. Be careful and you can take She-Ra in and out for however you'd like to display her. 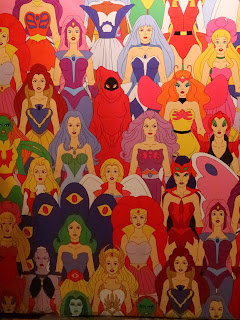 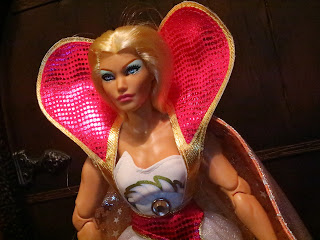 * It's kind of weird how She-Ra's hair doesn't come out from the sides of her collar now does it show up behind her cape, like on the vintage toy. It's just kind of stuck between her cape and her back. 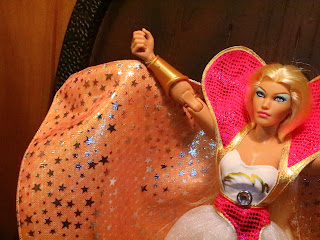 * I like how the cape attaches to She-Ra's wrists but it seems like her arms aren't designed to lift up enough to really give the "opening" cape feature the full effect. The swivel/hinge shoulders just don't raise up enough. 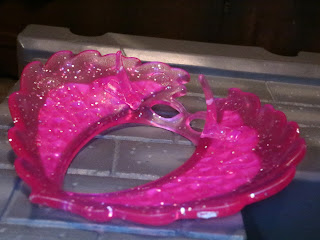 * I love the look of the tiara but the small "tines" that fit around her head and into her hair are very, very tiny. They really seem like they could snap off fairly easily if you're not careful. So be careful! 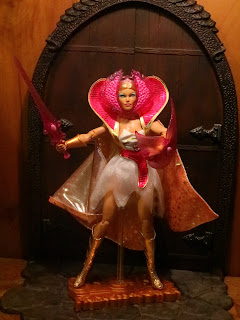 Considering that Starburst She-Ra is a fairly limited exclusive 1/6th scale figure with some seriously nice articulation, a well tailored outfit, and extremely intricate, collector friendly packaging, her retail price of $50 bucks isn't bad at all. Seriously, she's a seriously impressive looking figure and I really don't mind giving her an Epic rating. Mattel has teased some other figures in this style (including some MOTU characters like the Sorceress and Evil-Lyn) and I really, really hope they make it to collectors in some form. You can still get this She-Ra for nearly retail if you check out BBTS, so pick her up there. The previous She-Ra skyrocketed, though it is arguably the more recognizable appearance for Princess Adora. Still, who doesn't want more vintage She-Ra variants, right?

If you're a She-Raver who digs She-Ra/ Princess Adora then check out the figures I've reviewed: The Masters of the Universe Classics Galactic Protector She-Ra, the Club Grayskull She-Ra, the ReAction She-Ra, the She-Ra from the Super7 Battle for Etheria 2-Pack, and Mattel's She-Ra and the Princesses of Power She-Ra, Force Captain Adora, She-Ra vs Shadow Weaver, and Battle Armor She-Ra and Swift Wind.