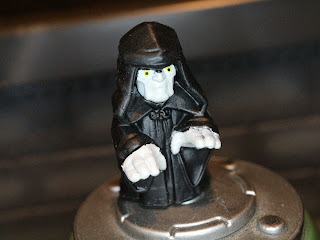 While I was out picking up a birthday present for my good friend and Confirmed Epic Podcast co-host the Reel Brad last weekend I stumbled upon series 2 of Hasbro's Star Wars: Micro Force line. I couldn't resist grabbing two packs of these little guys. While the first series contained all reused sculpts from the Fighter Pods line, series 2 features eight new sculpts out of the twelve total characters. Emperor Palpatine was in the first bag I pulled and while he is a reused sculpt, I never owned any of those figures so he's new to me. He's also very, very cool. This is a very slick looking toy that captures the Emperor's haunting visage perfectly in a somewhat deformed style. Let's take a quick look at this teeny, tiny Emperor Sheev Palpatine, AKA Darth Sidious, after the break... 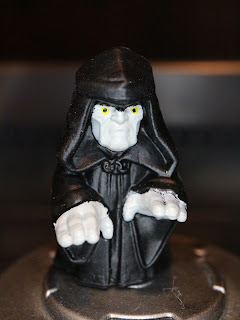 
* The Emperor is sporting a simple looking design of pasty white skin, black robes, and yellow eyes, but darn does he look cooler than most other characters who try something similar. I love the eyes and facial expression on this guy. The way the hood lays is also quite nice. The only flaw I really have with this figure is that the paintwork on the separation between his hands and robe is a bit messy. Still, being so small, it isn't terribly noticeable unless you're looking right at the this guy up close. 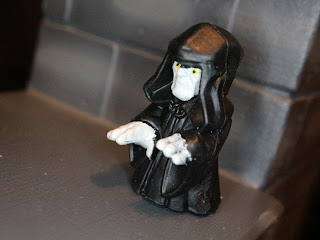 While I don't really like the concept of blind-bagged stuff, the price on these definitely makes it a bit more palatable. I like how series 2 offers a blend of characters from throughout the saga and hopefully future series include more new sculpts along with some of the more in demand Fighter Pods sculpts. Emperor Palpatine is a Good and a 1/2 little microfigure that adds just the right amount of dark side to your day!