The Scream of 31 Days of Toy Terror: Pennywise (The Dancing Clown) from It by NECA 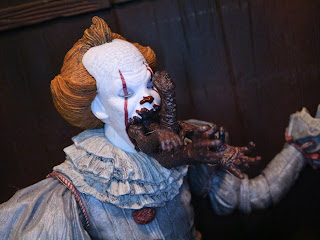 October 1st has come around again and you know what that means: It's time for another 31 Days of Toy Terror! Since this year's theme is centered on horror characters from film, I thought I'd start off with a review of one of the current stars of horror cinema: Pennywise! 2017's It is one of the most popular horror films in recent memory, and I think it is safe to say that a lot of the film's popularity has to do with Bill Skarsgård's portrayal of the demonic clown Pennywise. Since my goal is to do one horror toy review for each day in October I actually start writing these early but, by the time you're reading this we've all undoubtedly seen It: Chapter 2. I'm sure NECA will release multiple Pennywise figures based on that film in the future, but today's review is of NECA's fourth Pennywise release from the original film. NECA calls this release Pennywise (The Dancing Clown) and it includes some of the most complex alternate portraits they've released yet with a Pennywise figure. If you dig scary action figures, the It line has been a real treat over the past year or so. Ready to clown around with Pennywise on this first day of October? Then join me after the break... 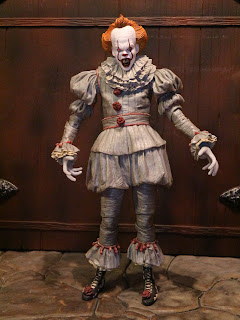 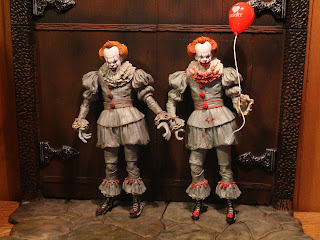 * On the left is the "Dancing Clown" release of Pennywise while the GameStop exclusive version of the original figure is on the right. Ultimately, all of these releases have used the same body with new heads, hands, and accessories. The base figure is the same as the previous release although the colors on this release are much darker than on the GameStop version. Check out that review for the full details of the sculpt and articulation and this review for all of the cool new features. 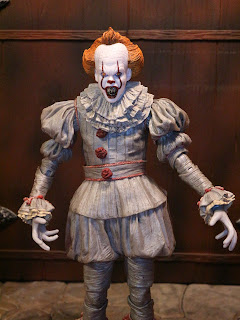 
* While Pennywise the Dancing Clown uses the same body as the previous releases, the paintwork here is much darker here with a full wash to bring out the details. Honestly, this makes the figure looks so much better and really shows off the intricate sculpting in the character's costume. Even the red details such as the pom-poms on the shirt and shoes are much darker. I think this guy is quite an improvement over the earlier releases (although the bloody Pennywise is still very striking and unsettling). 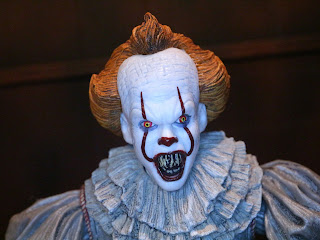 * Yikes! This isn't the face that Pennywise makes when he's dancing in the now infamous "dancing" scene but it definitely is terrifying. The work on the eyes and the teeth here are particularly impressive. If you're looking for the best standard, yet scary, Pennywise headsculpt, this might be it. The heads swap easily, too, so swap away, Losers! This one is absolutely sinister! 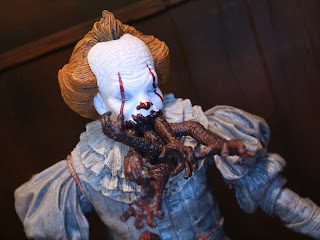 * Pennywise's second portrait is called the "Emerging Arms" head and, as you might expect, it features multiple arms emerging from Pennywise's mouth. This might be the most grotesque head in the set as a small swarm of arms are reaching out of Pennywise's mouth. Some of the arms are even articulated (they swivel at the base), so you can pose them a bit. Pennywise's eyes are closed, almost like he's vomiting these up. It's just really, really nasty. The heads from this set are all from the end of the film in the sewers under the Well House and Pennywise emits these arms to block an attack from Mike Hanlon during the final battle. 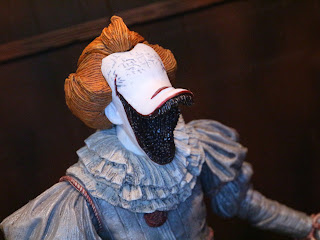 * Next up is a rather unusual Pennywise headsculpt. It kind of looks like something out of the film Beetlejuice, doesn't it? It's actually Pennywise's head as it restructures when he's using his Deadlights on Beverly Marsh. The head is battery operated and includes two 1.5v bolt batteries to make it light up inside. 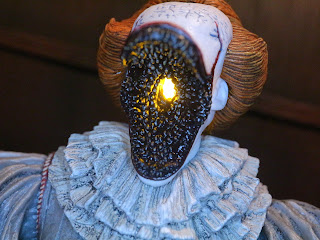 * Pennywise's "mouth" kind of reminds me of the mouth of a lamprey. It's round and looks like it has little teeth all around it. The Deadlights are an LED in the pack that glows yellow when you push a small button on the back of the head (it's hidden as a piece of hair). Honestly, having the Deadlights portrait in this set is one of the two things that really sold me on picking this figure up. It's incredibly neat and very, very well executed! 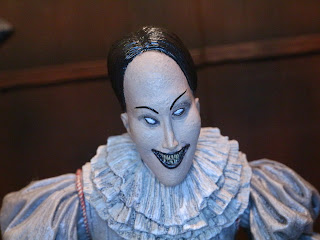 * The other thing that made this set a must buy for me is the disturbing headsculpt representing "Judith," the lady from the painting that terrifies young Stanley Uris. Judith, a combination of a real actress (Tatum Lee) and CG, was one of the creepiest parts of the film, and her twisty, terrifying visage takes this figure to another level. (Judith and the headless corpse, played by Javier Botet, creeped me out the most). While Mezco's upcoming One:12 Collective Pennywise comes with a lenticular of the painting, I think this portrait will edge that piece out a bit. This is terrifying! During the final battle Pennywise shifts back and forth between forms and at one point his head briefly shifts into the Judtih form. 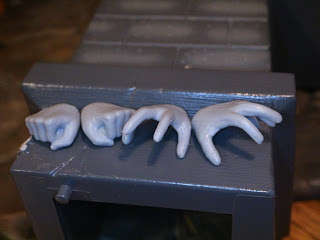 * Pennywise comes with two pairs of normal hands that swap out easily. You get a pair of fists and a pair of open, grasping hands. Mix and match to build the Pennywise of your nightmares! 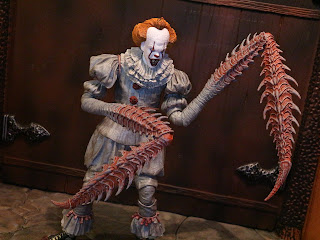 * Last, and definitely least, Pennywise includes two massive insect/ spider arms. One difference between the actual body of this figure and the previous releases is that the arms are easily removable at the elbow, allowing you to place these arms on. The sculpt is exceptional. They even have a swivel/hinge joint as well, so you can move them around for lots of creepy, crawly fun! The arms are from another shapeshift the clown takes during the final battle while he's getting beaten down by the Losers.

Considering that you get four very unique portraits with this guy, one of which had LED lighting and another that features some additional articulation (the outstretched arms emerging from Pennywise's mouth), Pennywise (The Dancing Clown) ends up being the best NECA Pennywise yet. He may be just a bit pricier than most of the other figures (but not by much, especially if you find a deal) but you're getting some very unique stuff here. Honestly, he's the best Pennywise NECA has released. The darker colors and wash on his outfit really improve the sculpt and the headsculpts are just much more fun. Combine him with the accessory pack to get little extras like the balloon, the boat, and the sewer diorama, and you'll have a near perfect Pennywise. This guy is Epic and is definitely the best Pennywise from It: Chapter One that you'll find. I started last year's 31 Days of Toy Terror with a Pennywise review as well. I have a feeling that guy might even show up again...
Beep Beep!

For more figures from It (2017) check out the following:
Pennywise (GameStop Exclusive)