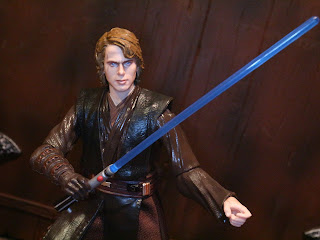 While I pick up most Star Wars: The Black Series releases, I actually haven't picked up any of the Archive series figures yet. If you're not familiar with the Archive series, Hasbro has been rereleasing some of the harder to find and more desirable Black Series figures from the early years of the line a rerelease in new packaging. Most of the figures aren't really any different but for some figures with visible faces, such as Luke Skywalker (X-Wing Pilot) and Yoda, Hasbro has improved the figures with the new face printing technology. Anakin was the first figure that appealed to me from the Archive series because even though I have the original release, he's one of the few Black Series releases with an alternate portrait. Considering he comes with two improved portraits, I figured he was worth a second purchase. Let's see what the new and improved portraits look like after the break... 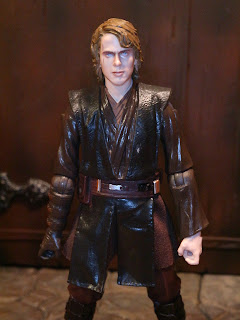 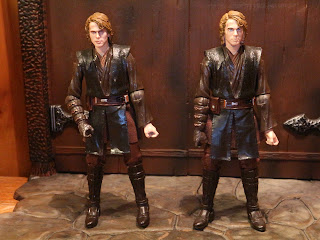 *On the left is the Archive series Anakin with the photorealistic headsculpt while the Black Series Phase 1 Anakin Skywalker is on the right. Other than the new heads, these guys are exactly the same. I didn't even notice any difference in the plastic quality for the elbow and knee joints. Fortunately, Anakin Skywalker was a pretty good figure when released, so that's not too bad. 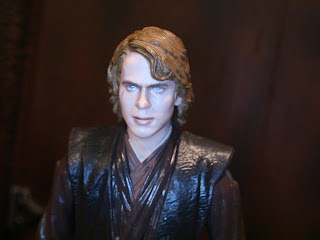 * The photoreal face printing definitely makes the standard Anakin Skywalker headsculpt look better. Much better, really. While there are definitely many aspects of the figure that show its age as a Phase 1 figure, the headsculpt isn't one of them. It's crazy to me, though, that this is the first non-Vader Anakin figure we've gotten in the Black Series. 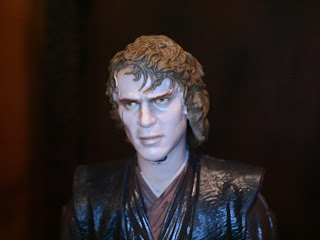 * Second up is the Sith Anakin/ Darth Vader head. It's not as good as the standard headsculpt but it's still much nicer than the sculpt from the original figure. It actually looks sweaty and battle worn, particularly around the hair, just like you'd imagine. 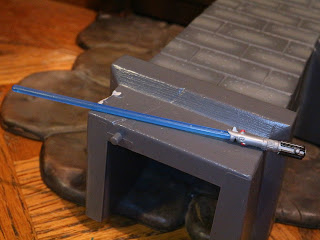 * Like the original figure, Anakin comes with his blue lightsaber. It's painted nicely, fits on his belt, and has a detachable hilt. 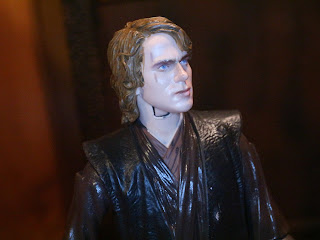 * My complaints about this figure are mostly the same as on the original figure. First, the neck hinge is still highly visible. Hasbro has really improved this over the years, but they hadn't at the point when this figure was released in 2014.

* Second, I still can't believe that Anakin doesn't have a robe. That would have been a great extra for the Archive series figure. 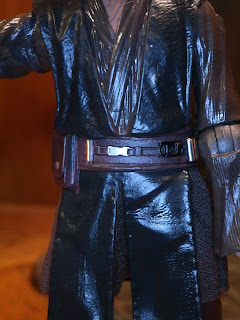 * Oddly enough, this guy has a problem that my original Anakin figure doesn't have: Some very sloppy marks of stray paint. It's hard to see since his tunic is kind of shiny, but Anakin has some errant paint marks on the front left of his tunic and around the pouch on his belt. It's odd that this guy's paint work is messier than the original figure. 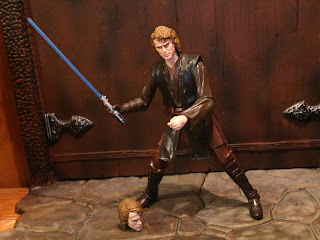 The headsculpts are better, but the paintwork is sloppier. Sheesh! Anakin is Good and a 1/2 figure, as the range of motion in the joints and the visible neck hinge are definitely showing their age compared to more recent releases. I actually really like that Hasbro has released a separate line of figures to get collectors some of the figures they might have missed out on previously (some of the earlier figures were really tough to find) though I feel a character like Anakin deserves a proper second attempt. He really should be one of the best figures in the line as there are so many options for cool extras for him. If you missed him the first time he's worth grabbing but unless you're a diehard, you may not need to scoop him up again.