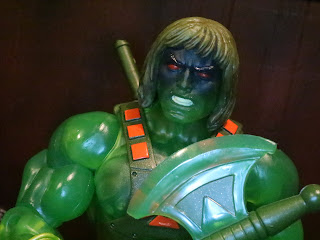 Back in early September I reviewed the first of the PowerCon 2019 exclusive Masters of the Universe Classics items from Mattel and now, just a little under a month later, I'm checking out the second: Horde Zombie He-Man! Based on the 1985 minicomic "Escape from the Slime Pit" that was packaged with the Slime Pit playset, this variant of the Most Powerful Man in the Universe represents He-Man after being taken over by the evil power of the slime. MOTUC fans have been wanting this guy for a long time and Mattel has finally delivered (although Super7 beat them to the punch with a ReAction figure of the variant). Horde Zombie He-Man is an honest to goodness MOTUC figure, though (which is my favorite toyline of all time), so I'm thrilled to have this guy on my shelf. Let's check him out after the break... 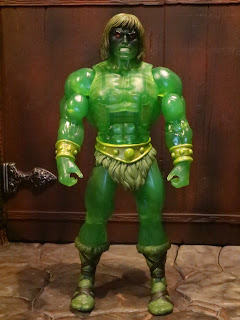 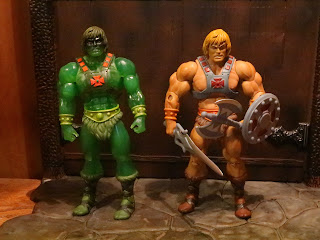 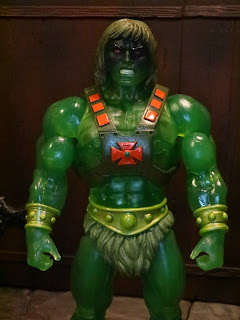 
* Horde Zombie He-Man really does look pretty awesome. I had always hoped that the figure would have a bit of a gloppy, slime covered look to him, just like the comic, but I think the translucent green look of the figure does a good job of conveying He-Man covered in Hordak's mind altering slime. He actually looks wet and icky! He-Man has both standard wrist bands (no left arm bracer) and his belt colored in a metallic green paint, which looks really good. His harness is also given a very dark green color, though for style the red details are left red with just a dab of green in the center of his cross emblem. He kind of reminds me of the Mucus Tick from The Tick, which isn't a bad thing at all. 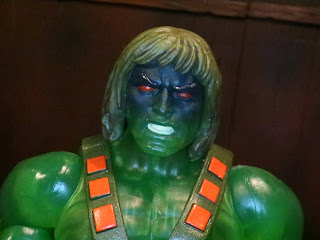 * Horde Zombie He-Man comes with three portraits, the first of which is the minicomic styled head that was included with the Oo-Lar figure back in 2015. The eyes are very dark and red, just like in the minicomic. This is the head He-Man comes packaged with and I think it looks the best on this figure. It seems very monstrous and savage, befitting a He-Man corrupted by Hordak's evil. 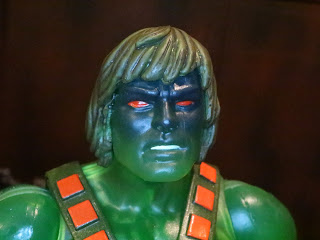 * Next up is the standard head. Again, we've seen this head many times in MOTUC but never molded in translucent green. It looks just fine, though I like the savage headsculpt better. 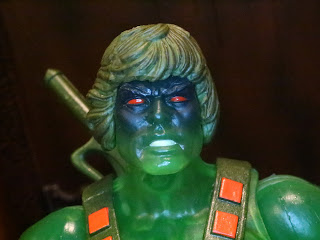 * The third portrait was also included with Oo-Lar, but as an alternate portrait: It's the vintage styled He-Man head. This one works pretty well with the Horde Zombie He-Man theme too, as this version of He-Man looks really, really pissed. He also still has really, really great hair. 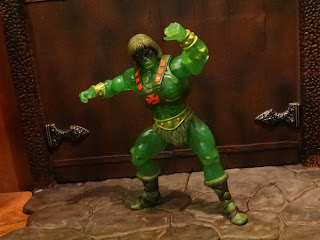 * While he's using the most basic version of the MOTUC body around with no swivel/hinge ankles or wrists, HZ He-Man is still a really fun figure. I do like the MOTUC style body and if Mattel stated they were going to be producing MOTUC again but not implementing the upgrades to articulation that Super7 introduced, I'd still be pretty OK with that. He also feels durable, so I don't anticipate any breakage issues like the Goddess had. Man, remember those days? Good times! 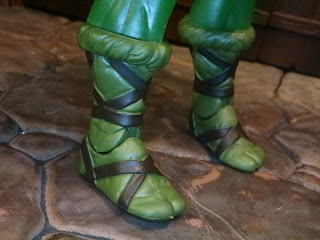 * He-Man's boots are pretty cool, right? They look like Eternian versions of the green and black military jungle boots. 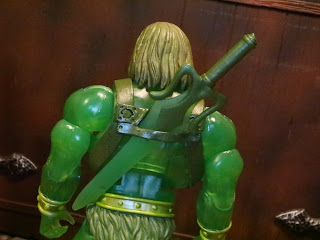 * Not only is He-Man's harness fully removable, just like you remember, but it also still holds his Power Sword. 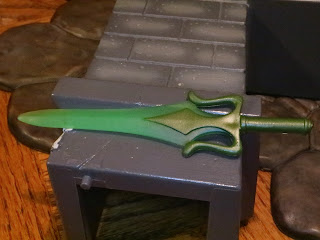 * Horde Zombie He-Man comes with the same three weapons the standard He-Man figure included, but this time they're molded in translucent, oozy green plastic with dark green highlights. First up is a green power sword! 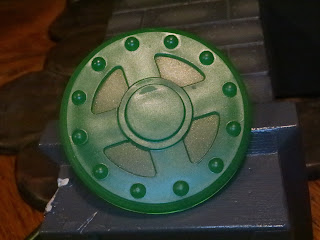 * Next up is He-Man's classic shield! It fits on his wrist fairly well still, even without the bracer arm. 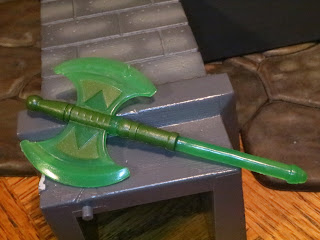 * Last up is the classic He-Man battle ax. I love this ax. Love it, love it, love it! I think I state that every time it pops up, but it's still the truth. 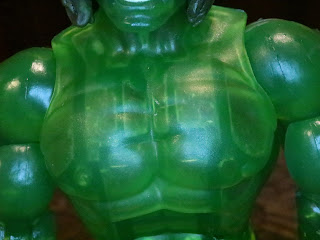 * The only thing that could have improved this figure would have been some darker green "slimy" paint apps, especially across the torso. When you can fully see into the figure, you sort of lose the "slime covered" effect and start realizing you're looking at something translucent. 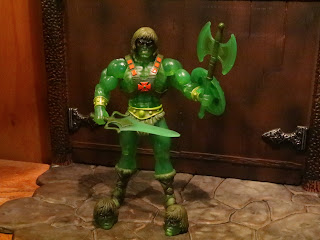 I really like this figure. A lot. Seriously, he's very, very cool. Of course, the biggest hurtle he has to overcome is that he was pretty frigging expensive. I know that PowerCon is a fairly small operation when compared to most other conventions that warrant Mattel granting them exclusives, but at $55 bucks (which, let's be honest, most people aren't going to get him for that price), this guy definitely is for the hardest of the He-Man hardcore. He's a Great figure, though, and an excellent repaint that makes a very complete MOTUC collection feel just a little bit more complete. I still want more, though. More MOTUC I say! We'll see what next year brings, won't we?

I've reviewed so many He-Man figures that he has his own review archive! Check out Fabulous Secret Powers for more action figures of He-Man/ Prince Adam!