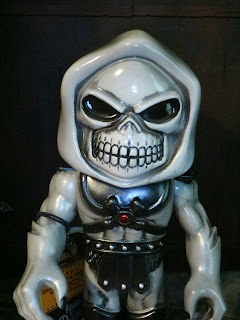 Today on old school MOTU I'm showing off the first Funko Hikari Skeletor I've reviewed in the site: Gray Skull Skeletor! I've talked about Japanese soft vinyl toys before when looking at Super7's Beast Man Japanese vinyl toy and Medicom's Sofubi Batgirl as well as some of Funko's Star Wars Hikari minis. Hikari is the Japanese word for "light" and often refers to figures that are translucent or clear. The sofubi toy style is definitely an art form with toys made in smaller batches and handpainted rather than being assembled in a standard factory. I don't know how true to these roots Funko's offerings stick (they are made in China) but they were far less expensive than most Japanese vinyl pieces when they were released. Funko released this Skeletor in seven different color schemes but today it's the "Gray Skull" variant we're focusing. That's kind of a punny name, isn't it? Gray Skull, as in Skeletor has a gray skull, but you've also got Castle Grayskull, the object of nearly all of Skeletor's schemes. Clever! 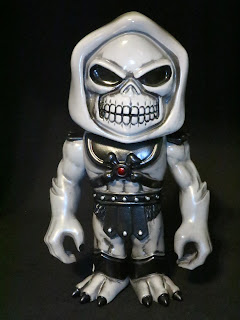 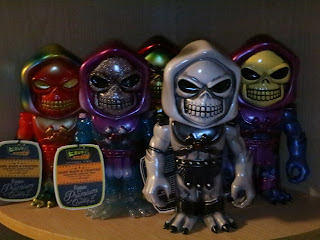 
* Here's a picture of Skeletor (Gray Skull) on my shelf with my other Hikari Skeletors. I've also got (from left to right) Mythos, Havoc, Mystic Powers, and Metallic. I'm still missing Antique Classics and 24K, as well as the ridiculously expensive Toy Tokyo figure. They're all the same sculpt but with unique paint schemes. 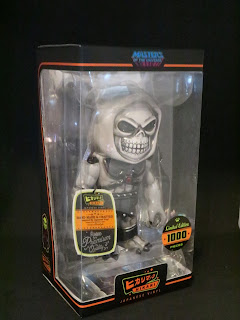 * The packaging is similar across all releases. Skeletor comes packaged in a nice window box with the edition size denoted by a sticker on the front. The boxes are fairly collector friendly although the card giving the figure's individual run number is sealed in a plastic bag and taped to the bottom of the package. 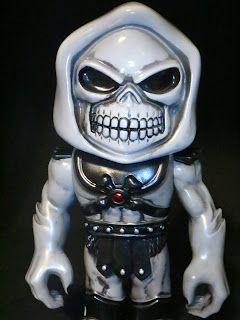 * Skeletor looks pretty incredible. I love the look of the Hikari vinyls and they look even better on display the more you get. The sculpt is excellent as the soft vinyl used here really conveys detail in an interesting way. Skeletor's wearing his classic costume but the entire figure is done in gray with black detail. The only hint of "color" is the red jewel in the middle of his chest harness.

* There is a great drybrushing effect on the figure as well. It might actually be airbrushed, as that is common with sofubi vinyls. The black highlights all over Skeletor's body definitely highlight his muscular body, showing off how tons this guy is. He works out! 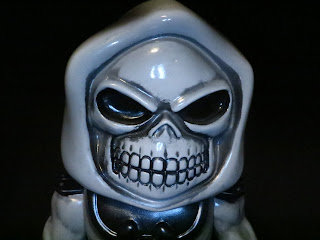 * The headsculpt is excellent. It's very stylized but in a different way than something like a POP! vinyl or a Dorbz figure. It's quite frightening rather than feeling cutesy. The work on the teeth is excellent! 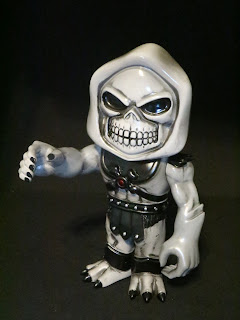 * While Skeletor isn't truly an action figure he still is articulated. His head and shoulders can swivel, giving you the chance to pose him a little bit when on display. The quality of the figure feels quite good and there's something very appealing about the feel of the toy. 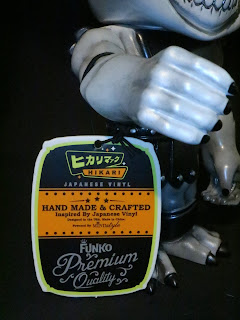 * All of the Skeletor Hikaris have a cool little tag on them that shows off some details about the figure. I'm not sure why but it's a cool little extra that actually seems really cool when the figure is on display. Don't ask me why, but it makes me feel like these are something sitting on the shelf of a cool, slightly off beat toy store. 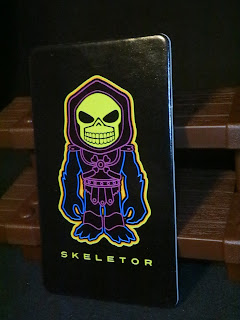 * There's also a neat little art card included with each release. This thing is made of very, very sturdy cardboard and on the back it features the name of the Skeletor variant along with the run number. Mine is #641 of 1000! 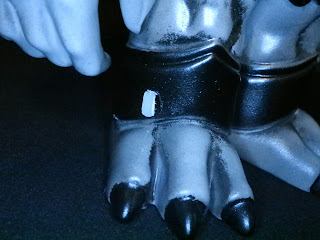 * There is a weird little paint chip on the shin guard of my figure. Mine was new in the box when I ordered it so this must just be a production fluke. 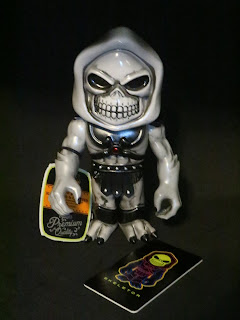 While the original price on this guy might have been a bit higher than you might expect (I grabbed him from Gemini Collectibles where he is still in stock!), I can't argue with the fact that this is a pretty slick looking Skeletor item. I love the paintwork and sculpt on this guy. There's really something about these that is incredibly appealing and while I thought the multi-colored Skeletors would be my favorites, I'm definitely returning over and over to checking out this Gray Skull version. I'd give him overall a Good and a 1/2 rating. There's not necessarily a lot of "substance" here but the style is really impressive. Skeletor is one of those characters who is fun to have multiple items of just to show off multiple different looks and interpretations and this is another fun addition to the collection.

Do you collect any Hikaris or sofubi? What's your collection like? Tell us in the comments below!