Trap Jaw-ly! Trap Jaw from Masters of the Universe by Mattel 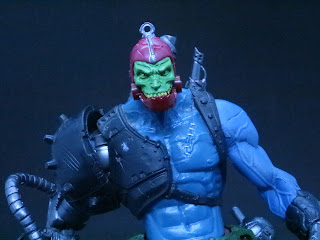 As Trap Jaw-ly continues on let's take a look at what may be my second favorite Masters of the Universe toyline: The 200x/2002 Masters of the Universe line. The 200x line retained the overall looks and colors of the vintage toys but they added some wicked cool details and designs that really brought the denizens of Eternia to life. One of the coolest new designs was Trap Jaw as the Four Horsemen really ran with the idea of Trap Jaw having been modified with multiple cybernetic parts. The Icons of Evil comic from MVCreations further explored the identity of Kronis, the leader of a group of bandits who wars against Skeletor and is destroyed in the process. Skeletor burns Kronis' face, causing it to take on a sickly green color, destroys his right arm, and finally rips off his lower jaw. Rebuilt by Tri-Klops, Trap Jaw becomes a formidable member of Skeletor's Evil Warrior and a regular part of the Mike Young Productions cartoon series. Trap Jaw was released in the third series of figures in early 2003 along with Teela, Orko, Tri-Klops, and some He-Man and Skeletor variants. Let's take a look at Trap Jaw after the break and see why he's one of the most popular 200x redesigns... 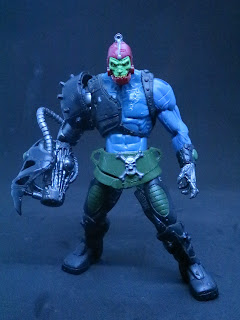 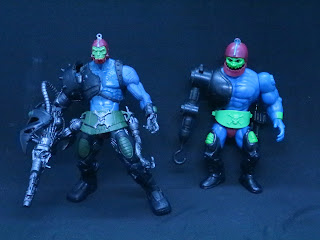 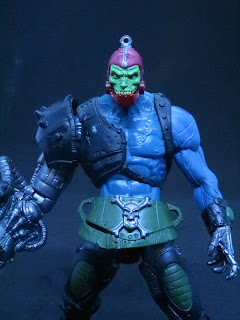 * Trap Jaw looks amazing! His body is covered with scars and stitches, showing both his background as a warrior and the damage he suffered undergoing repairs from Tri-Klops. There seems to be a lot of inspiration from Frankenstein in Trap Jaw's appearance. His arm and the shoulder harness that holds it in place now seems way more sinister with lots of studs and damaged bits. Notice that Trap Jaw's left hand and the tops of his thights also looks like they are mechanical. This guy is now more machine than man, isn't he? 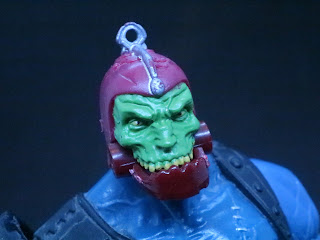 * The headsculpt is terrifying here. Rather than just looking like someone with green skin here Trap Jaw truly looks like his skin has necrotized, and now it is zombie-like and a putrid green. His teeth are wickedly wonderful as is his massive jaw. And yes, he still has his helmet and he still has an eyehook on it, so you can still have him unwisely use helmet to shoot down a zipline. Maybe that's why his facial tissue is dead looking? 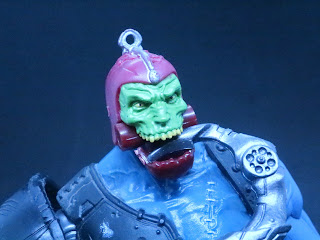 * Trap Jaw's jaw is hinged and spring back into place when you pull it town. He can even hold stuff in it! 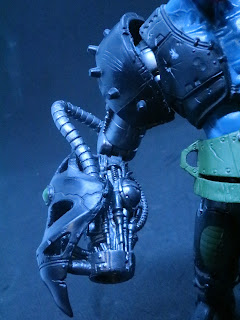 * While the vintage figure has a very simple robotic arm, the 200x Trap Jaw has an amazingly designed robotic arm. It's quite large and is covered with wires, armor plating, and all sorts of greeblies. The elbow is also spring hinged, meaning that Trap Jaw can swing at the Heroic Warriors as a sort of battle action. 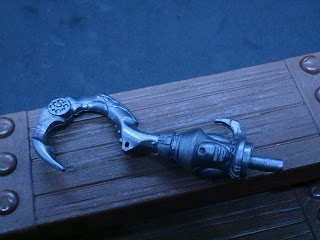 * Trap Jaw comes with the same three arm mounted accessories as the vintage figure although they are now way more sinister. First up is his sinister hook hand! 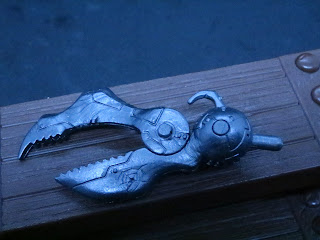 * Next up is his claw hand. This thing could give Clawful a run for his money, couldn't it? It has a hinge joint at on both the claw and at the wrist. 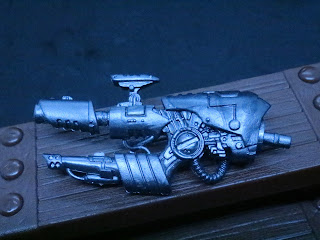 * Lastly is his massive rifle hand which looks like it has two barrels and all sorts of wicked functions. 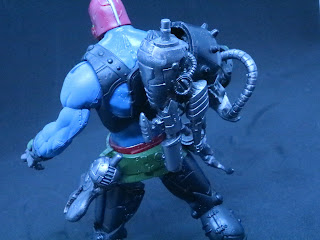 * Trap Jaw can carry all of his alternate hands with him. The hooks on the hook hand and the claw hand can hang on the loops on his belt while the rifle hand plugs into a port on the back of his armor. The belt is a separate piece that rests over his hips but it isn't removable. 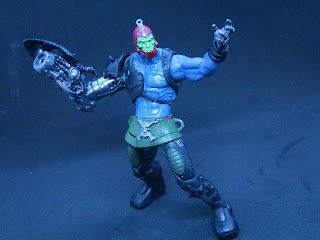 *  The figures of the 200x MOTU line aren't superarticulated but that wasn't very unusual for the time. The presence of the H-hinged hips, swivel/ hinge shoulders, the wrist swivels, and of course Trap Jaw's hinged robot arm and jaw definitely make these quite fun to play with. They're sturdy and a blast to mess around with.

* Like most of the other earlier figures in the line, Trap Jaw has a microchip in his right boot to activate features in the Castle Grayskull playset. 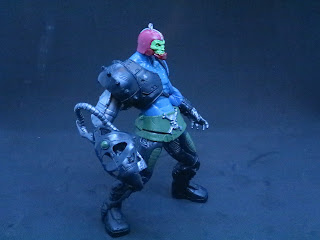 * The legs of the figures, despite the H-hinged hips, are definitely very pre-posed. Trap Jaw can stand on his own but it looks kind of odd as his crotch is thrusting out and his shoulders are leaning back. 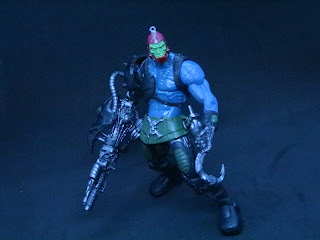 The 200x line is very solid all around for the most part and Trap Jaw is without a doubt one of the highlights of the line. He looks so much more menacing now! While Masters of the Universe Classics is my favorite toyline of all time, there definitely are areas where it is a step backwards from the 200x line and not capturing something likeTrap Jaw's wicked cool design in that series was a mistake. This guy is amazing and loaded with play features: A hinged jaw, spring hinged arm, and three interchangeable weapons for his robotic arm? That's just Epic! Great job, Trap Jaw! You're definitely one heck of a guy!