Trap Jaw-ly: Trap Jaw from Masters of the Universe Classics by Mattel 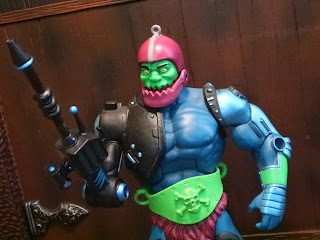 Trap Jaw-ly may be coming to a close soon but I'm still going to try to roll out a few more Trap Jaw reviews for you fine folks!  Today I'm returning to the greatest Masters of the Universe line of all time with a review of Trap Jaw from Mattel's Masters of the Universe Classics! I didn't start reviewing MOTUC figures until 2013 so I've been slowly filling in the gaps between 2008 and 2013. Trap Jaw was released in February 2010 as the standard monthly Club Eternia figure and his day of sale lasted 19 minutes which, up to that point, was the fastest sell out time for any MOTUC figure (he was released on the same day as Battle Cat and the Grayskull themed Battle Stands). Many of the early MOTUC figures came with multiple heads to give the figures different looks and Trap Jaw was no exception. One of the coolest things about this guy is that besides being a stellar homage to the vintage toy, he came with additional parts to turn him into Kronis, his pre-Trap Jaw self from the Icons of Evil comic from 2004. I think many MOTU fans would put the MOTUC Trap Jaw up there as one of the best figures ever released in the line, so let's take a look at this fan favorite after the break... 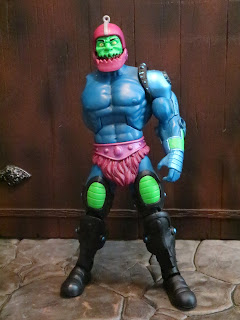 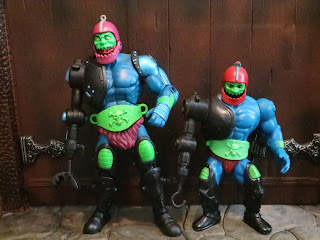 * Just for fun here is a look at the MOTUC Trap Jaw (left) compared to the vintage Trap Jaw (right). Mattel and the Four Horsemen did an excellent job of updating this guy. The MOTUC version has brighter colors and more detail but overall he is a very faithful update. 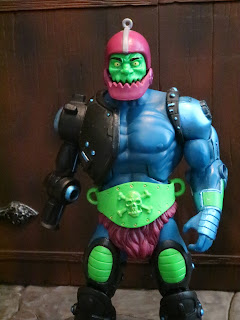 
* Trap Jaw is amazing. While he's based on one of the earlier MOTU figures, most of which reused many standardized parts, Trap Jaw feels quite unique tanks to multiple details like his robotic arm, the harnesses over his shoulders, and his bright, vivid color scheme. He looks fantastic and the blue, green, and purple really pop, don't they? This guy is just one of the standouts in the line and everything looks so neat and clean on him. I love the addition of the blue rivets all over his black harnesses and his robotic arm. It's really cool to see those little details added to the character's appearance. 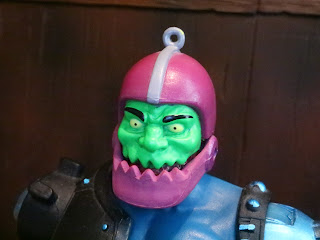 * Trap Jaw looks fantastic. While he's based on the vintage toy, of course (Mattel did not yet have the rights to the Filmation designs and characters in 2010) there definitely is something very Filmation inspired about the sculpt. It has so much character, particularly thanks to his bright yellow eyes and his eyebrows. Of course, he's also sporting the loop on top of his head so he can zip line into battle. And yes, that's still a terribly dangerous thing to do! 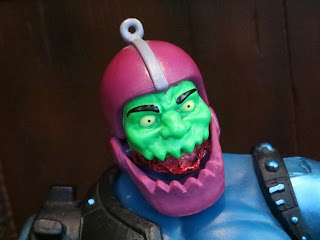 * Trap Jaw's jaw is hinged so not only can you move it up and down to give him some great expressions but you can look behind it and see.... YUCK! What the heck is that? Is that just the random bits of blood and gore from his missing jaw? Has that mess not healed yet? Wow! That's pretty hardcore, don't you think? 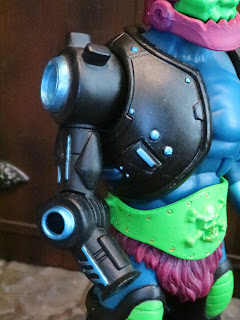 * Trap Jaw's arm is fully articulated and covered with cool metallic blue details. The arm looks awesome and his extra hands swap out very easily. It's a great setup! 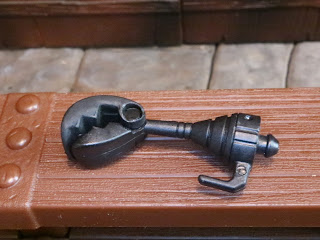 * Trap Jaw comes with all three of the swappable hands you would expect, now given some metallic blue rivets to help them stand out a bit more. First up is his claw. It's hinged so it can really open! 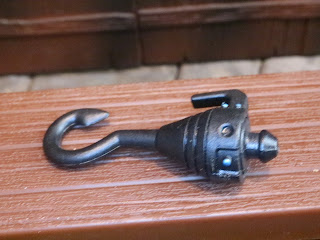 * Next up is his hook which is probably his most recognizable accessory. It looks sharp on the end, doesn't it? Trap Jaw has always had a bit of a "space pirate?" vibe so this piece goes nicely with him. 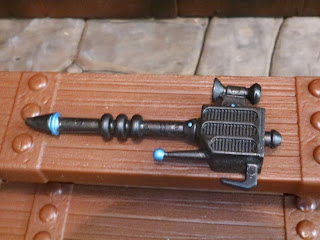 * Last up is this really cool laser rifle. Yeah, this one's my favorite and the improved detail and the blue highlights make me like it even more! 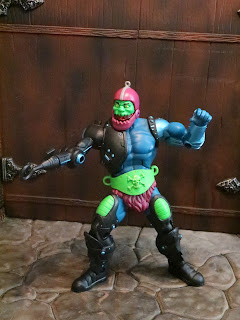 * Trap Jaw's articulation was pretty standard for the line at the time and, overall, it was pretty good. His cybernetic shoulder is a bit limited in motion due to the protrusions on it but otherwise everything else moves just like you'd expect. Mattel largely kept the same articulation scheme for these figures from 2008 through around 2016 and the figures were nearly always durable and fun to play with. 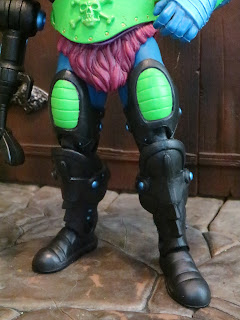 * Trap Jaw's boots and thigh armor looks fantastic! While these boots were reused in the line many times they originated with Trap Jaw and were always referred to as "Trap Jaw legs." 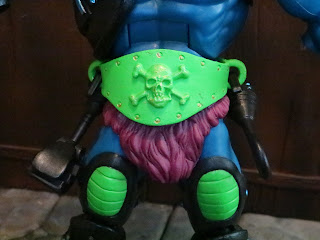 * Trap Jaw's belt is removable, though why you'd ever want to display him without a neon green belt with a skull and crossbones on it is beyond me. You can also hang the hands not in use from the loops on the sides. 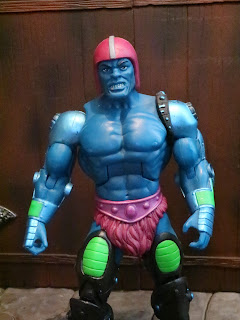 * I mentioned at the beginning that Trap Jaw comes with two additional pieces to revert him back to his pre-Trap Jaw identity of Kronis, and here his is using them. If you remove his cybernetic arm (and his right shoulder harness, though I do think it arm looks a bit off without it) and head and put on the new parts you have your Kronis! I know I just went on a rant about never wanting to take off his belt but if you do he looks even more different from Trap Jaw. This was a pretty cool extra and definitely ensured that some folks bought two Trap Jaw figures to display one as Kronis. 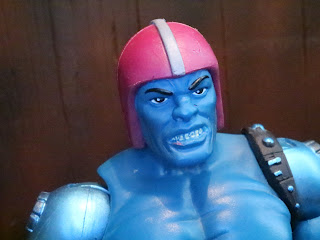 * Kronis' portrait is pretty cool and definitely gives off a very different vibe than Trap Jaw's headsculpt does. The helmet doesn't have the eye hole and, of course, there is no metal jaw. In the newer canon Kronis is a Gar, like Keldor, so he's all blue and now we can see his regular face. I like it. He definitely looks like a pretty tough character. 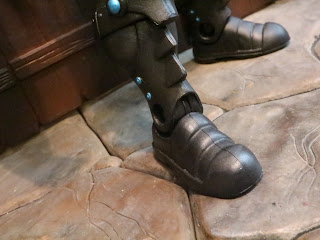 
* Trap Jaw has some loose ankle joints. This was a fairly common defect in the early years of the MOTUC line a number of characters suffered from it. 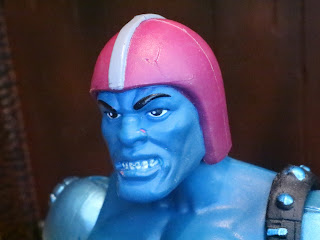 * There's actually some purple paint slop on my Kronis' face. Look around his nose and lip. That's not something you usually see on MOTUC figures, so it's a bit unusual to be sure. 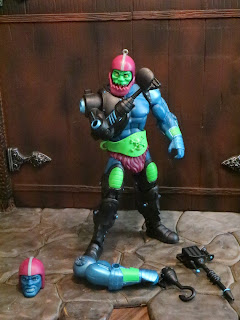 I didn't get into MOTUC until Moss Man was released in March of 2010, the month after Trap Jaw came out, so I ended up trading to get caught up on the line. I'm glad I did as MOTUC's popularity really took off in 2010. In 2008 the SDCC King Grayskull sold out in about 7 hours and in 2009 Man-At-Arms sold out in around 45 minutes. 2010 started with Adora selling out in 27 minutes, then Trap Jaw selling out in 19 minutes, and the Moss Man and Evil-Lyn selling out in around 6-8 minutes. Crazy! Trap Jaw is a popular figure and he surely was a character who drew people into MOTUC. He's so well done with lots of extras, including the pieces to make Kronis. There actually were even plans to give him a knife and a sword, but those didn't cost out and were included in the first Weapons Pak. Trap Jaw is an Epic MOTUC figure and definitely one of the standouts in the line. If you missed out on him be ready to pay out the nose as his price has continued to increase over the years. He's an amazing figure of a popular character who is still in high demand.