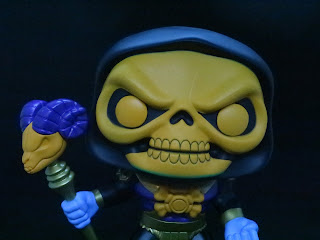 Back on June 10th a friend email me to let me know that Funko was putting this 10 inch Disco Skeletor POP! vinyl on Funko-shop.com that day. Unfortunately, I didn't get home to check my email until late that night so I had to rely on someone from one of the Masters of the Universe groups I'm part of on Facebook to pick it up. This guy sold out quickly and his price has really jumped! Yes, I reviewed the standard 10 inch Skeletor last month but today I'm checking out the Disco Skeletor variant.  I've discussed the story behind Disco Skeletor before so today I'm just checking out this figure. Ready for an absolutely massive POP! vinyl of one of the gaudiest versions of Skeletor around? Then join me after the break... 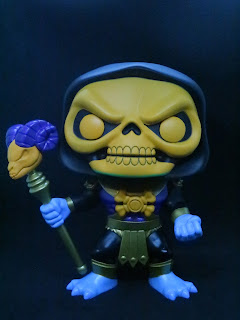 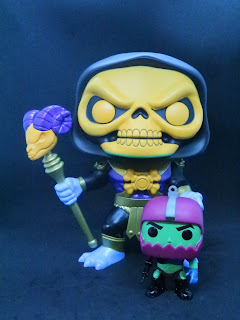 
* Like with the standard 10 inch Skeletor, the first thing about this guy that just grabs your attention is how large he is! Well, OK, maybe for Disco Skeletor it's his crazy colors. But his size? Definitely the second thing you'll notice. Yeah, he's only 9 1/2 inches tall, but he's really quite bulky very heavy, too. There's something really appealing and very eye-catching about a POP! this big! 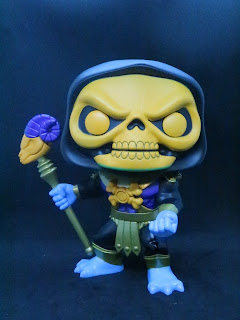 * I like this Skeletor sculpt quite a bit. While he's much larger than your standard POP! vinyls his design is a real improvement from the original POP! figure. I love the sideways fist (Skeletor looks like he's explaining some evil scheme to his minions!) and, as always, the ability to turn the head allows you to give the figure a bit more of a pose when on display. 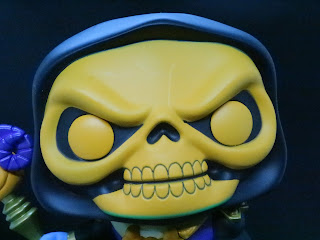 * The headsculpt is really good here. I love this look much more than the first POP! Skeletor's portrait. The yellow of the skull really pops here and while he doesn't have red eyes, the outlines of the individual teeth and the green under his chin stand out. I know most collectors don't tend to think of Funko when they think of impressive sculpting but there really is something quite impressive about the stylized work here, especially when seen in this scale. 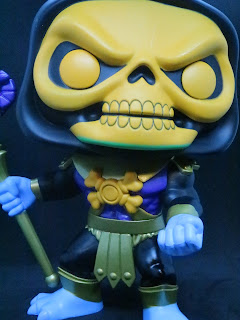 * Not only is the sculpt nice here but the multiple colors look great underneath that gold armor. This is definitely a funky costume Disco Skeletor is rocking, but that's OK! Just get down at Snake Mountain all you crazy, sexy, beautiful disco people! 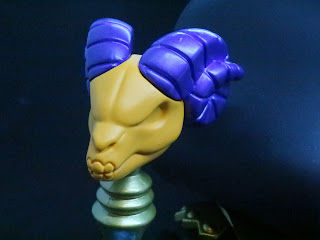 * Skeletor always has to come with his trusty Havoc Staff, doesn't he? The details on the headpiece are fabulous! The Havoc Staff is also rocking the disco color scheme with a yellow skull, purple horns, and a gold shaft. 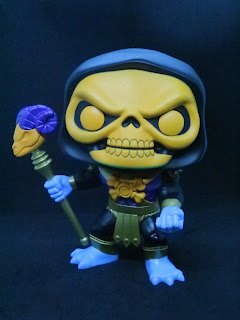 While it was frustrating that he was a very limited exclusive that sold out in seconds, I can't help but like this POP! vinyl of Disco Skeletor. It's kind of amusing how a figure that everyone laughed and tried to wrap their mind around during the 200x era is now one of the go to color schemes for Skeletor variants. Funko seems to love it! I like it too and while I don't like it quite as much as the standard 10-inch Skeletor POP!, this is still a Great POP!. Unfortunately, the price has jumped on this guy so you really will have to shop around and prepare to still pay more than you planned for this guy.

Which disco classic do you imagine Skeletor likes to play on disco night down at Snake Mountain? Let us know in the comments below!