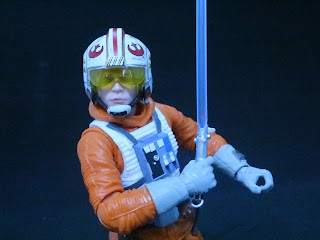 The second wave of the Star Wars: The Empire Strikes Back 40th Anniversary figures features a few new figures and I'm checking out another one of them today: Luke Skywalker  in his Snowspeeder pilot gear. Hasbro actually has a Snowspeeder released for the Black Series as well (it comes with Dak Ralter) so this isn't just a figure who is going to have to stand around without a craft to pilot! Luke Skywalker doesn't have a bad outfit in the Original Trilogy but his costume changes in The Empire Strikes Back are all pretty incredible (though nothing tops his "Bespin" fatigues). I have an attachment to his Snowspeeder pilot outfit because I remember a surprise gift from my parents of the Star Wars: The Power of the Force II Luke Skywalker in X-Wing Fighter Pilot Gear. That figure was misnamed as it actually turned out to be Luke in Snowspeeder Gear, so he went really well with the POTFII Snowspeeder. Here we are 25 years later and I'm still playing with a Luke Skywalker figure in this same gear! That's the power of Nostalgia, right? Let's check this guy out after the break... 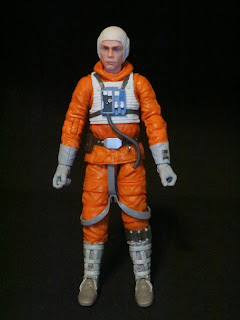 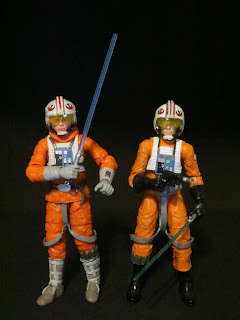 
* On the left is the new Luke Skywalker (Snowspeeder) while the original The Black Series Luke Skywalker (X-Wing Pilot) is on the right. Guess what? These guys share no parts whatsoever! Yup, Snowspeeder has a completely new sculpt! That's awesome and really shows off Hasbro's attention to detail in most releases in this line. 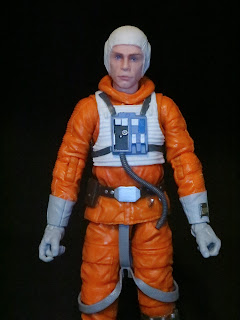 * Luke's Snowspeeder gear looks amazing. It's much bulkier than his X-Wing outfit and the material looks appropriately bulky and quilted. Something really cool about this figure is that his vest is actually a separate piece over the bodysuit. It's not removable but it looks fantastic. I love separately molded piece like this that make the figures outfit seem more three dimensional! The color is a bit different than the X-Wing gear, too, and it features the cool cold weather boots everyone wears when on Hoth. 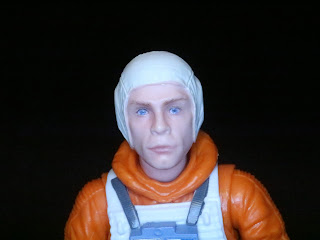 * The headsculpt on Luke is excellent. Hasbro sculpted Luke wearing the hood that is under his helmet which helps his helmet to fit better, too. It' a good sculpt and the face printing looks quite sleek in person. Sometimes I think the face printing doesn't photograph well but it certainly looks good in hand. 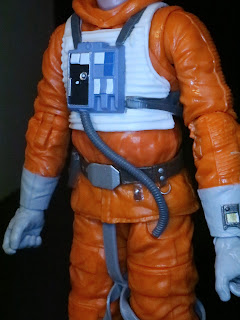 * Here's a close-up shot of the front of Luke's outfit so you can see what's going on. The details are spot on and the paintwork is super neat and clean here. I love how the hose on his chest panel actually disappears into a "pocket" on the front of his outfit. This is a complex outfit and Hasbro had handled it well. 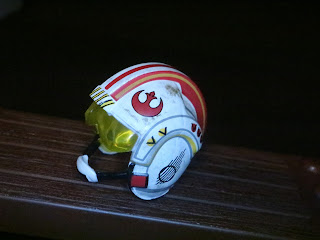 * Luke's helmet looks the same as his X-Wing helmet (it's probably meant to be the same) but it is a new sculpt as the proportions are slightly different. It's still an impressive look piece with a great paintjob, though (but so is X-Wing pilot Luke's helmet, too). 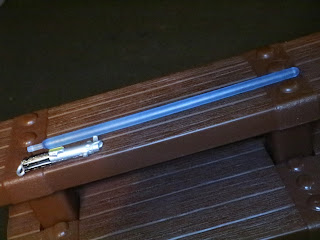 * This figure has the same accessory as most other Luke Skywalker figures: A 2-piece lightsaber. There is very little difference between these and the other versions except that the lightsaber blade seems a bit thicker and sturdier. 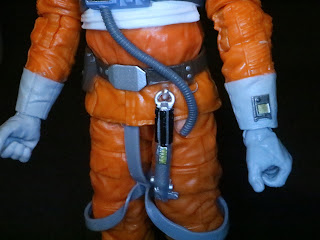 * Check that out! Luke's lightsaber hangs from his belt loop perfectly! 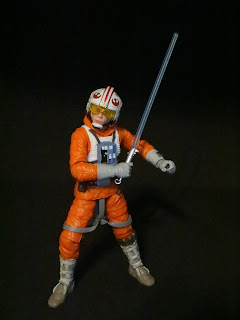 * This is a very well articulated figure. While his outfit is bulkier and the hips are restricted a bit by the straps hanging down over his hips, Luke can move wonderfully. He not only has the usual quality array of articulation seen on the Star Wars: The Black Series figures but he also has the "butterfly" shoulder/ pectoral hinges that are quickly becoming a staple. How do y'all refer to those joints, by the way? I call them butterfly pecs or pectoral hinges, but that just still seems off. Any better ideas? 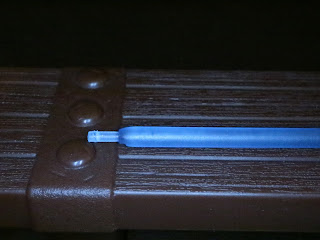 
* While this lightsaber has a slightly thicker peg than most others it still seems too fragile for me to feel comfortable popping it on and off the handle. i really wish we'd just get a standard lit lightsaber and a separate hilt accessory. 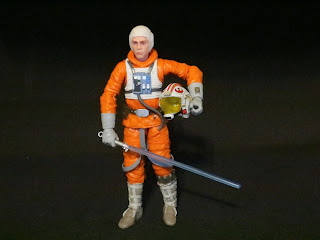 Luke Skywalker (Snowspeeder) is a Great and a 1/2 figure and another hit this year for the Black Series. It's nice to see another new figure in the 40th Anniversary line though if you miss this guy he's getting a Phase IV release later this year in the new, more colorful boxes. The only thing that I think could have made this guy better is if he had come packaged with the grappling gun he uses to assault the AT-AT although I believe that accessory comes with the Snowspeeder. Still, I would have preferred it here, too. Spider Luke, Spider Luke...