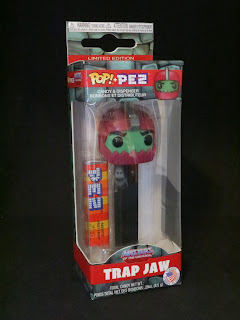 It's time for another Trap Jaw-ly review and this time I'm checking out the standard POP! + Pez Trap Jaw dispenser. I reviewed the chase variant minicomic Trap Jaw Pez dispenser a couple week ago so let's take a look at what the main release looks like. He's definitely more faithful to the vintage toy or the Filmation design. He has a hook, a claw, a laser cannon, a fly swatter, and an energy bow, but did you also know that Trap Jaw can dispense candy? Find out more after the break... 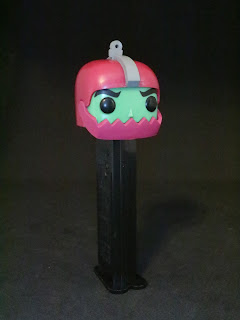 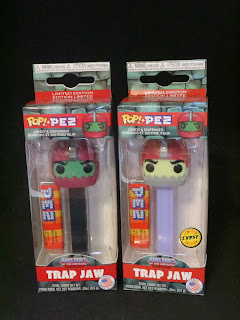 
* Here's a quick comparison shot of the standard Trap Jaw Pez dispenser (on the left) and the chase variant Trap Jaw (on the right). They're the same dispenser in the same box, although the Chase Variant has a sticker denoting it as such on the box and, of course, the dispensers are different colors. The Chase variant has lighter skin, a silver jaw, and a lavender stem versus the black stem, darker skin, and purple jaw of the standard dispenser. 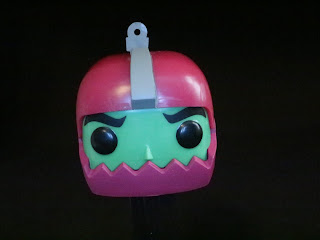 * The selling point of this line is that these are standard Pez dispensers with Funko POP! vinyl heads, so this looks just like the POP! Trap Jaw (which I have not yet reviewed on here). It's a pretty good likeness of the character done in the cutesy POP! aesthetic. I especially like the eyebrows and the menacing work on his metal jaw. Of course, he also has the loop on top of his helmet. This was included on the vintage figure and was intended as a way for the character to essentially zip-line down into battle. 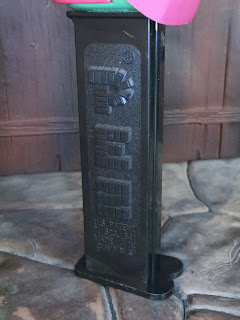 * Trap Jaw's dispenser body is exactly the same as any other Pez dispenser I've ever seen. It's black, I'm assuming to match the color of the vintage Trap Jaw figure's boots, and it holds a roll of candy. I mean, c'mon: It's a Pez dispenser. What more can I say about it? 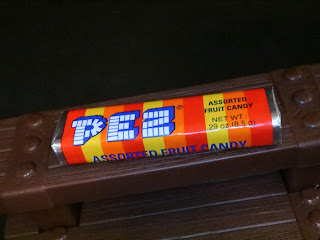 * All of the POP! Pez Dispensers includes a pack of Pez (assorted). Why does it only come with one when you usually get three? I guess because these are intended more as collectibles rather than really intending to be eaten. The nice thing is you can take these out of the box and put them back in, making them collector friendly. They do display nicely in the box, so that's how I'm keeping them. 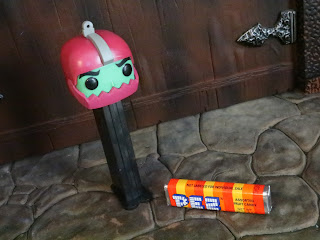 Trap Jaw is one of my favorite of the Funko POP! + Pez dispensers. He's such a recognizable character and his design works really well as a Pez dispenser. Yeah, I still wish his jaw opened to deliver the candy (not that regular Pez dispensers really function like that, either) but overall he is quite cool. Trap Jaw is a Great item and a fun collectible for the Trap Jaw lover in your life. Do you own one of these? Have you ever put him on a string and let him zip-line across your living room? Let us know in the comments below!