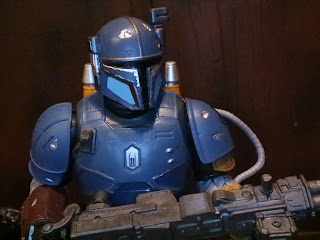 While I'd love to say it's simply a loving homage to the time when most background Star Wars characters didn't have names, that fact that the package simply calls this guy Heavy Infantry Mandalorian rather than his real name, Paz Vizla (he's voiced by Jon Favreau, who also voices Pre Viszla in The Clone Wars and Rio Durant in Solo). It's a small thing but, to me, it shows the current lack of cooperation and trust between Disney and Hasbro. With The Mandalorian, we've received one of the best things to come out of the Disney era of Star Wars, and Hasbro's currently on fire with the quality of what they're producing in the Black Series (sorry 1/18th scale fans, I know y'all are definitely getting left out in the cold and I do feel for you), so why not bring this stuff together? We should be swimming in product for The Mandalorian right now! Still, I'm grateful for anything we're getting from the series (even though I have yet to actually acquire a Mandalorian himself) and this guy was a surprise that kind of showed up out of nowhere as a Best Buy exclusive.  While he's a bit bulkier than some other figures, it's kind of odd that Hasbro felt the need to designate this guy as a Deluxe release (he's given the designation D2 on the side, following after General Grievous' D1 numbering). Is he really that deluxe and worth of a $8-$10 dollar price jump? Well, let's check Paz Vizla out after the break and see if he's deserving of a salute himself... 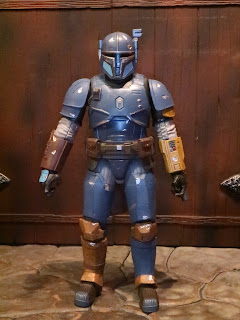 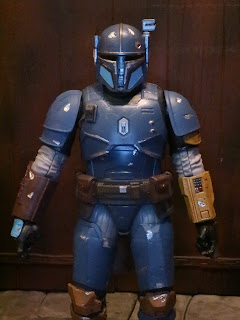 
* If you don't like Mandalorians, I don't know what to tell you. Paz Vizla is a Mandalorian and he's got some incredible armor. His blue beskar armor is covered with rivets, wear and tear, and lots of cool little doodads and gadgets. If you sat around in school doodling Mandalorians when you were supposed to be taking notes, odds are that at some point you drew a guy who looked like Paz Vizla here, and there's nothing wrong with that. This guy is big, bulky, and tricked out like the best of them. I really like his leather utility belt and what might be a communications device on his chest. 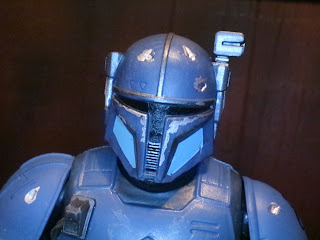 * Vizla's helmet looks fantastic, too. He's got a bit of light blue on the "cheeks" of the helmet to give the shape of the helmet a bit more definition and, of course, he's got an antenna and a range finder mounted on the sides. There are also a lot of dings and dents here, too, because the Mandalorians play hard. 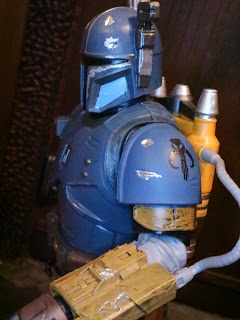 * The paintwork on this guy is definitely better than on your average Black Series figures. The paintwork has been pretty good on the line, don't get me wrong, but I can definitely see where this guy is a but more intricate than some other figures. Again, there are lots of scratches and scuffs on the armor along with some great drybrushing effects to give him a rougher look. He's also rocking a mythosaur emblem on his left shoulder. 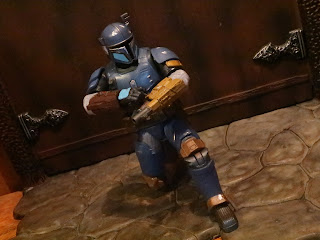 * Despite being tall, bulky, and covered in beskar armor, the Heavy Infantry Mandalorian is one of the most well articulated figures in the line. Not only do his joints have a great range of motion but he also has the lateral pectoral hinges, which allow for better two handed weapon holding poses and soft shoulders pads, so that none of the shoulder articulation is sacrificed. 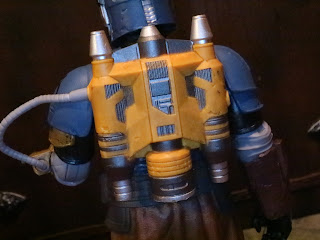 * Paz Vizla comes with three accessories, although they all connect together. His jetpack is really awesome looking with great paint applications. It fits very securely on his back and the grey fuel line connects to it (the fuel line runs to the flamethrower on his left forearm). 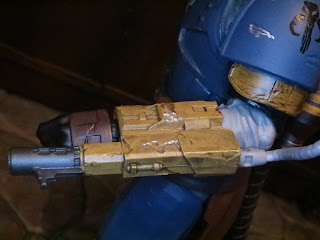 * This crazy flamethrower-like weapon on his left forearm is amazing, too. Seriously, I love the detail on it. Wrist mounted weaponry always just seems so cool and I'm glad this guy is toting some around. 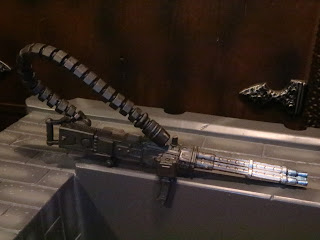 * Paz Vizla probably gets the designation of Heavy Infantry Mandalorian since he's toting around this massive heavy blaster cannon (which reminds me of Baze Malbus' cannon from Rogue One). The sculpt is excellent, the barrel of the gun has multiple paint applications, the magazine that attaches to the jetpack is nice and flexible, and there is an articulated handle on the side that allows for the figure to hold it in different ways. 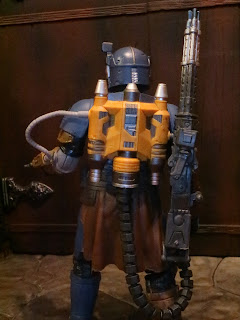 * Not only does Paz hold the canon well but it can also store on the side of his jetpack, too. It looks pretty cool like this, don't you think? 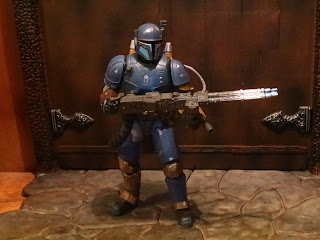 Yeah, the figure might be $10 dollars more than the standard figures, but considering how well done everything is on this guy it's hard for me to be too upset. Seriously, the Heavy Infantry Mandalorian/ Paz Vizla is one of my favorite Black Series figures of 2019. I'll probably be dong a best of 2019 list of the Black Series and I imagine this guy will be on there. He's an Epic figure and definitely a great example of what Hasbro is capable of in this line. While you can knock there character selection and distribution at times, they are putting out some killer action figures. This is the way.

This is the first figure of Paz Vizla I've reviewed. For more figures from Star Wars: The Black Series Phase III, check out the following: