Action Figure Review: Scareglow from Masters of the Universe by Mondo 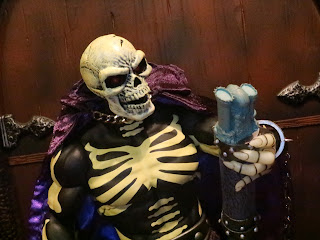 First things first: The vintage packaging lists the character's name as Scare Glow, while lots of more recent merchandise uses Scareglow. I'll probably mix it up and use both interchangeably, because that's how I roll. Now, secondly, man, does Scare Glow have a cult following or what? For being a figure that seemingly few fans had as a kid, now everyone loves Scare Glow. Considering he has hardly appeared in any media and we know next to nothing him, Scare Glow's fandom kind of reminds me of Boba Fett's fandom throughout the 1990s. I always find it off that I never had Scare Glow as a kid since I'm on the younger side of MOTU fandom (I wasn't born until 1983) and I owned so many of the 1986 figures: Gwildor, Saurod, King Randor, Mosquitor, Blast-Attak, Clamp Champ, Buzz-Saw Hordak, and even some of the Meteorbs. How the heck did Scare-Glow get by me? Anyways, the last few years have seen a bit of a Scare Glow renaissance and Mondo has managed to get Scare Glow into their 1/6th scale Masters of the Universe line as the fourth figure released. Scare Glow went on sale on Halloween of 2019, but he just started shipping during the first full week of 2020. Like his vintage counterpart, Scareglow is mostly composed of parts from other figures with a new head, cape, and weapons. He's an interesting figure but, I have to say, he definitely has disappointed me a bit. Let's take a look and see how Mondo's interpretation of Scareglow turned out after the break... 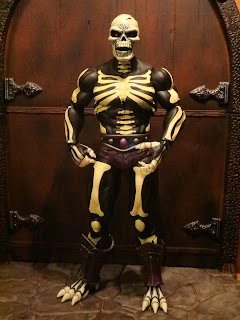 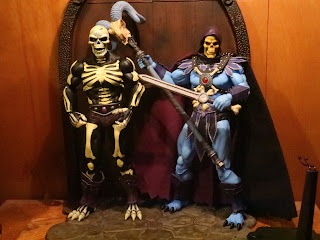 * The Mondo MOTU line relies on reuse, so Scareglow uses the same body, hands, feet, and greaves as Skeletor. They don't really "feel" like the same figure due to the radically different paintjobs and the unique accessorization, but if you've played with any of these figures then you know what to expect. 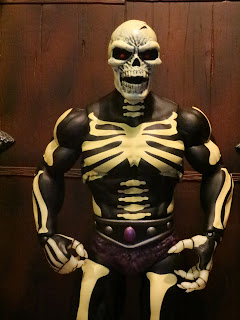 * Scare Glow is a skeleton. I muscular skeleton, to be exact. It's kind of heard to not dig that, right? I'm going to get into some of my complaints about the design of Mondo's Scare Glow here in a minute, but for now I'll say that I don't hate this figure. I really do like it and it's very well done in many ways. Like every Scare Glow release I can think of, Scare Glow utilizes a unique paintjob to give the impression of bones joined together by unearthly magic. 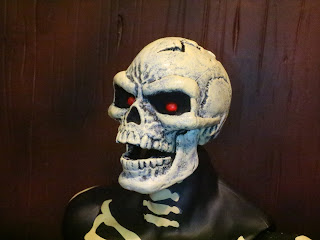 * The headsculpt is really well done, and it meshes well with the aesthetic Mondo seems to have gone for with the rest of the line: A very traditional "swords and sorcery" vibe. Seriously, this is what you might imagine a very barbarianesque MOTU film version of Scare Glow might look like: Red eyes, a weathered, cracked skull, and a mouth full of nasty old teeth. the jaw is hinged as well, although it doesn't have too wide of a range of motion. 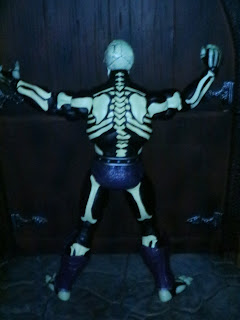 * Scare Glow has the same battle worn greaves and clawed feet as Skeletor. His greaves are a bit brighter shade of purple than Skeletor's though. It seems like they're designed to somewhat match his cape. 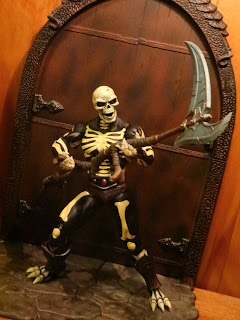 *  Mondo's MOTU figures do not feel like your traditional 1/6th scale figure but more like oversized Masters of the Universe Classics figures. Like the other figures in the line, Scare Glow is really heavy, but also very durable. I love how sturdy the feels. Mondo continues to do a great job with the quality here which should inspire confidence in buyers. The articulation on these figures isn't bad, either, and Scare Glow is extremely fun to pose. The joints stay together great but, if you push them to far, they do pop out rather than break. Customizers could have some fun with these, no doubt. 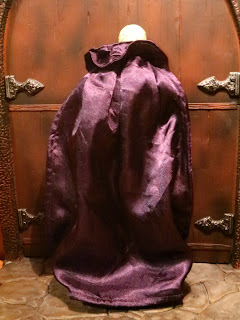 * Besides being a glow in the dark skeleton with a crack on his noggin, Scare Glow's other design trademark is his purple cape. The fabric goods have been of a very high quality so far in this line and Scare Glow's cape is no exception: It's clearly made from two different materials (the outside is dull and velvety while the inside is kind of shiny) and it features wires in the bottom of the cape and in the mantle to allow for posing. A chain keeps it around Scare Glow's neck (his head pops off so you can put the cape on), which just seems really classy in my book. 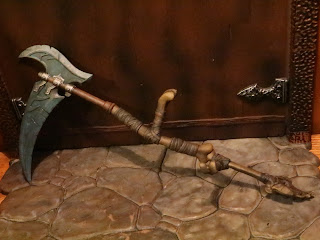 * Mondo has definitely re-imagined the weapons in their Masters of the Universe line and Scare Glow's Scythe of Doom is definitely the most drastically changed, I think. Rather than being neon green with a glow in the dark blade, the Scythe of Doom is now a very wicked, very evil looking armament. It's a large accessory with two extra handles made of bone (one is removable, allowing you to more easily put the scythe in Scare Glow's hands). There's a lot of detailed paintwork here, too, particularly on the leather wraps on the shaft of the scythe and on the weathering of the blade. 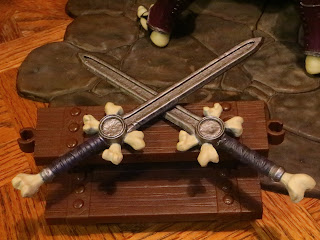 * To add a bit more value to Scare Glow, Mondo threw in dual blades for him to wield. These are actually the same as the sword that Skeletor came with (it's based on Skeletor's sword from the Filmation series) with hardly any paint differences, either. It's odd that these are being treated as generic swords, as Skeletor's sword always seemed unique to him, but extra accessories are never a bad thing. 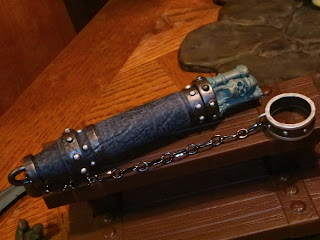 * One of the coolest things about Scare Glow is that he carries a cursed reliquary containing a key to a secret entrance to Castle Grayskull. Too bad he isn't allowed to open the reliquary and take the key! The reliquary was introduced in Masters of the Universe Classics line and here it looks even better: The miniature Grayskull on the top is awesome, as is the actual metal chain which keeps this attached to Scare Glow's wrist. Just remove his hand and pop the cuff over his forearm. 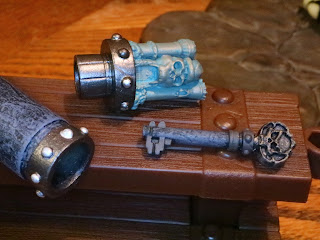 * Inside the reliquary is a key to the secret side entrance of Castle Grayskull. I love the design of the key and the skull emblem on it. 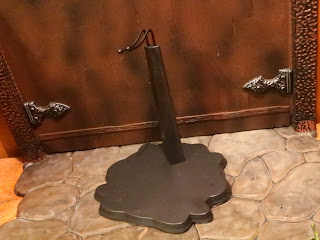 *  While you probably won't"need" it, Scare Glow does come with a black plastic display stand with a metal rod that rests under his crotch to keep him standing. It's not the best design for a stand but it works quite well for a heavy figure like this. It's the same as the other stands in the line, so if you already have any other figures then you know what you're getting. 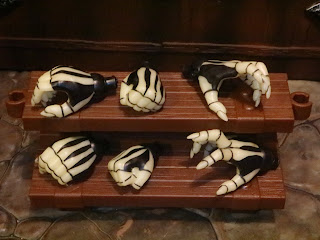 * Scare Glow comes with the same six interchangeable hands that Skeletor has, only given a bony paintjob. The hands swap out rather easily (they have really thick wrist pegs so no worries about breakage) and stay in place tightly. You can swap out between three pairs: Gesturing hands, traditional fists, and standard grips. The hands are actually fairly rubbery, too, making putting weapons in them so much easier. 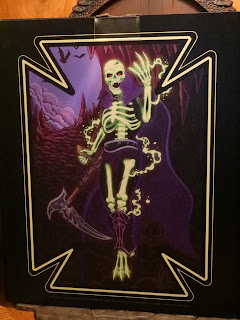 *  The box is not only collector friendly but it also has some fantastic art on it (apparently from Florian Bertmer). The interior box is a five panel box with magnetic closures and a gorgeous print of Scare Glow on it. The plastic trays to hold the figure and accessories slide out easily. My favorite part, though is that the slip cover looks like the one of the faces on Snake Mountain. This box is definitely worth displaying as well if you haven't already put one of the previous boxes on your shelf. 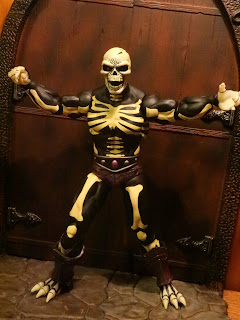 * I have absolutely loved the three previous releases in the but while I like Scare Glow, I don't love him. First off, Scare Glow just looks a bit off. I couldn't quite put my finger on it and first but, finally, I saw someone mention the problem: Rather than being cast in glow in the dark plastic with the negative spaces in his bones painted on, he has now been cast in black plastic with the bones painted on. It seems like it would work better but, in actuality, it just doesn't look nearly as good. It looks less "ghostly" and more like someone wearing a skeleton costume. 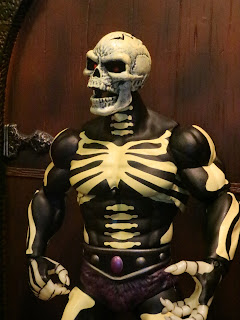 * My second complaint with Scare Glow is that his head just doesn't quite match up with his body. His head looks very "realistic" with lots of weathering and macabre detail. His body though.... well, it's kind of plain. Why doesn't Scare Glow have a cool, more barbaric looking loincloth? Everyone else in the line does. Why no new bracers? Honestly, considering how the box art depicts Scare Glow, I'm kind of disappointed in Mondo's interpretation. I really was hoping that they were going to go with an actual skeletal body rather than just a repainted body. Yeah, the body design is usually part of Scare Glow's charm but for a $185 dollar figure I think I would have liked to see something new and true to the spirit of the character rather than something so beholden to the limitations of the vintage toy. 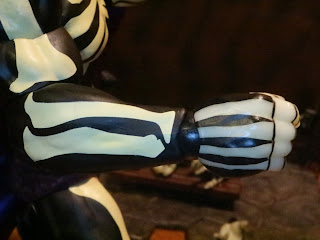 * Seriously, this guy needs some bracers, doesn't he? Scare Glow's arms look really weird without them on a figure of this scale. Too much "exposed bone" on a figure this large really kills the effect of this being an actual skeleton. 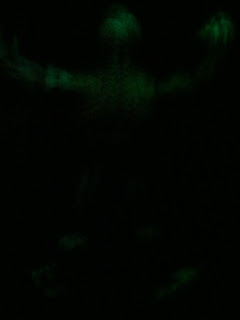 * For a guy known for glowing, Scare Glow's glow effect is really, really week here. It's also rather inconsistent with his hands and feet glowing better than everything else. This clearly isn't a good picture, so you'll have to take my word for it. 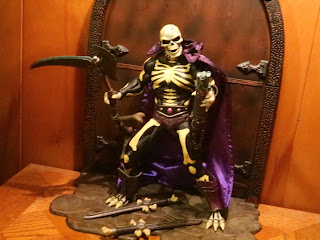 I know Scare Glow is a Mondo exclusive, and thus fewer were made, but considering that he's a bit pricier than the previous figures it's disappointing that he comes with no extra vintage toy head, no companion figure, and includes some reused accessories. I don't dislike the figure but whereas He-Man and Skeletor felt like Mondo was doing something new with the character designs, Scare Glow feels like a rehash of the vintage design that misses some of the charm with the weaker glow and the reversal of the torso colors (white paint on a black torso rather than black paint on a GITD torso. He's still a Good and a 1/2 figure, no doubt, but he's not in the same league as He-Man and Skeletor for sure.

If you're a Scare Glow fan, check out my review of the MOTUC Scareglow, the Mega Construx Scareglow, and the ReAction Scareglow.