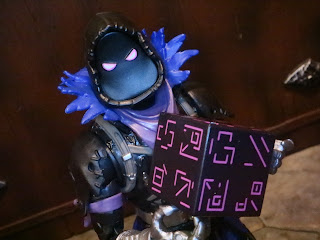 I'm still, slowly but surely, going through some of the cool stuff I ended up with for Christmas 2019. I actually received the newest series of Fortnite figures (I've reviewed a few of them previously), one of which is Raven. Raven definitely has a very cool, very goth look to him. He kind of reminds me of a mixture between a Halloween costume and the Merchant from Resident Evil 4. I was really excited for this guy but I will say that I'm a bit disappointed here due to how Raven's face was handled. Anyways, let's take a look at the "Brooding Masters of Dark Skies" after the break and see how he turned out... 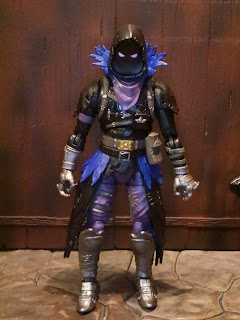 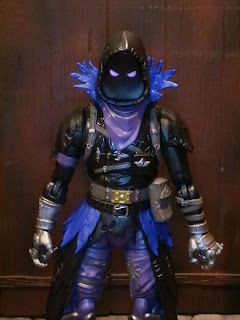 * I really like Raven's black, blue, and purple color scheme. While he definitely is a mysterious, hooded character clothed in black, the random blue feathers on his collar and waist definitely help him stand out a bit more. He's clearly based on a character design archetype but he doesn't look at all generic. He does share a few base parts with other figures (upper legs, upper arms) but the amount of unique details really helps him stand out. I love his purple bandanna, the torn sleeves of his coat, and the various straps across his torso. He looks like he's ready for battle for sure. Caw! Caw! 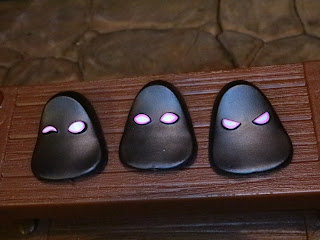 * Like most other figures in the line, Raven does come with three alternate face plates. Well, that's what I'm calling them still, even though Raven has no face. It's really just his eyes. You've got  winking eyes, regular eyes, and angry eyes. These actually swap out really nicely underneath the edge of his cloak, so you don't see any gap where the face plate attaches. 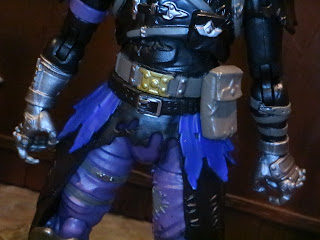 * Raven's belts are cool (he's too goth for just one belt) and he's also carrying a big pouch on the brown leather belt. Jazwares did a nice job of making him look rather layered and complex, which means this is an excellent translation of the in-game character design. 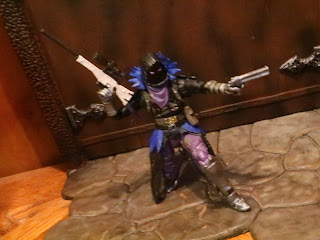 * Like the rest of the Fornite: Legendary Series, the articulation on Raven is incredible. He feels sturdy, durable, and has articulation that feels like it could give Toy Biz's Marvel Legends line a run for its money. The inclusion of things like toe joints, lots of swivel hinges, double hinged elbows and knees, and butterfly pecs allow this guy to take some crazy poses and uses two-handed weapons with ease. 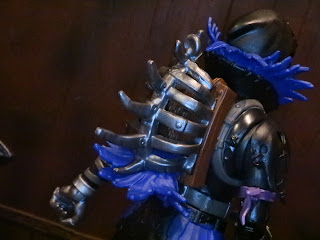 * Raven's back pack is called the Iron Cage and it really suits him. It's an actual iron cage attached to a wooden backpack, adorned with blue feathers. Looking at pictures, I think I have mine on upside down. It' looks pretty cool and spine-like this way, though. Nifty! 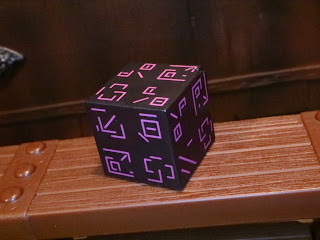 * The Shadow Stone is a fairly large, hollow cube that is covered with various arcane runes. There's also a small hole where Raven (or any character, for that matter) can place their thumb to be able to better hold the item. In game, the Shadow Stone allows a character to transform into a Shadow Form, but in the toy world this looks like a cool artifact that could chill out in the background of any archive of magical objects! 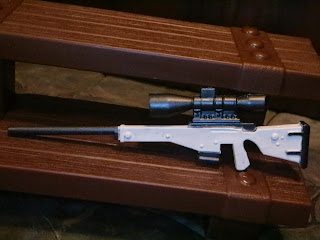 * Raven comes with two firearms, the first being the same Bolt Action Sniper Rifle that came with Enforcer. It's is a cool looking weapon. The Fortnite weapons have a sort of boxy, almost cartoonish feel to them, but the paint detail and and the crispness of the sculpt still makes them shine. For some reason the designs make me think of how the weapons looked when you viewed them from Bond's watch in GoldenEye007 on Nintendo 64. 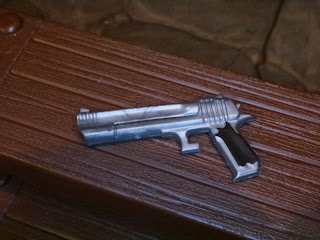 * Raven's second firearm is the Hand Cannon, a pistol which seems to be based on the Desert Eagle. The open trigger guard makes holding this one quite easy and the figure looks great with it. 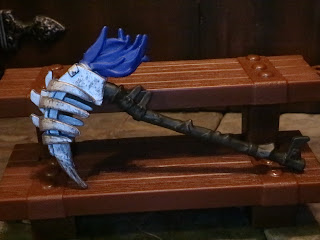 * Raven's harvesting tool is called the Iron Beak. It's a pickaxe styled instrument that definitely fits with the aesthetic of the figure and the back pack. Made of iron spikes and covered in blue feathers, this thing definitely makes a statement. 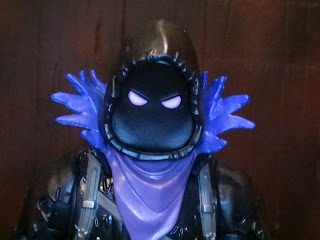 * As I mentioned above, Raven is supposed to have a face hidden underneath a hood with only eyes visible. Jazware's solution was to paint the eyes onto a flat face plate but, honestly, this just doesn't look that good. I mean, it's not horrible, but it's definitely not a well done effect. 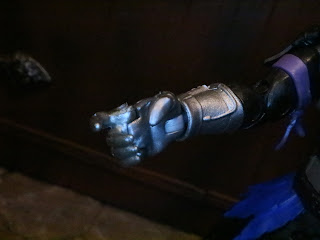 *  My biggest complaint with this line is that Jazwares went with hinged fingers. The fingers move with one hinge and while they're not as problematic as the fingers on older Marvel Legends figures, I still don't like them that well. The grip on Raven seems even looser, making it hard to hold most accessories without some real finagling. 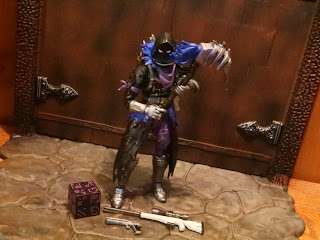 Despite not loving how Raven's mask turned out, I still gotta give Jazwares props for everything else. You're getting a lot of accessories with this guy as well as a pretty cool figure with nice sculpting and a great design. If it weren't for my lack of enthusiasm for the hooded visage, this guy might have been one of my favorites in the line. I still think he's a Great figure, but in this line being just Great kind of places you at the bottom of the pack. Raven has become quite elusive lately, so hopefully he'll hit in greater numbers soon.