Wrapping Up 2019: Finn Balor from Masters of the WWE Universe by Mattel 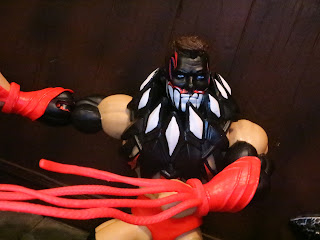 I was expecting more of a presence for Mattel's Masters of the WWE Universe during this Christmas shopping season but I never even saw the individual figures or the single boxed ring on shelves. The excellent Grayskull Mania set hit Walmart shelves pretty consistently, complete with its own bunker, but they often got stuck somewhere outside of the toy department as Walmart is just consistently at actually putting toys in places where they make sense. Walmart.com did have all of the single packed figures in stock on multiple occasions, though, and the first one I was able to get my hands on was Finn Balor, the Heroic Demon King. I actually haven't watched WWE for a few months but I always enjoy Balor and his Demon King persona makes for an excellent MOTU inspired look. I'm kind of getting a Beast Man vibe from him, possibly because his collar reminds me of Beast Man's furry collar. Anyone else see a figure that more directly inspires Finn Balor? Anyways, let's check this guy out in more depth after the break... 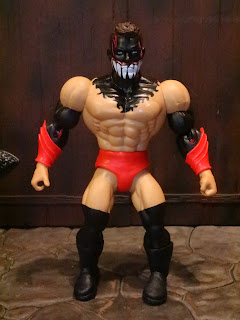 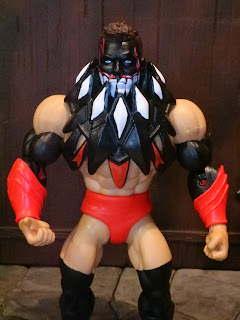 * Finn Balor mostly uses the same body as Triple H, which is based on the Masters of the Universe Origins body design. Finn doesn't look too different from his standard WWE in-ring appearance as the Demon King although he's sporting more fantasy like armor around his chest and on his forearms. The chest armor is quite spiky, like teeth, and is removable in case you want to display Finn without it. The forearm guards are unpainted and very well may show up in Masters of the Universe Origins later this year as they're somewhat generic and seem like they could be reused quite easily. 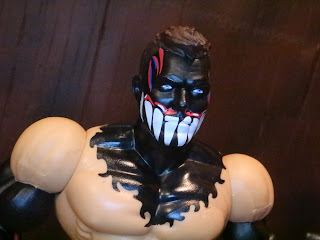 * The headsculpt definitely seems to resemble Finn Balor, although that's a bit difficult to judge due to the awesome paintjob. Seriously, Finn looks fantastic here donning his demon king facepaint. I love the giant teeth across his lower face. 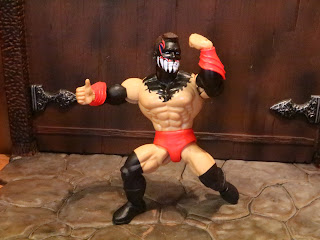 * So far all of the figures using this body type  have solid articulation and Finn  Balor is no exception. These are good quality figures that kids can legitimately play with and have a ton of fun. They also feel really, really durable. 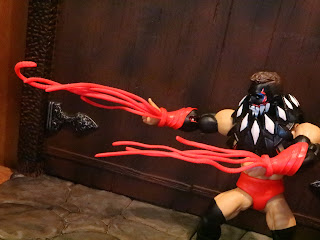 * In WWE Finn Balow wears tassels around his wrists to give his entrance look a more dramatic, sinewy appearance. In Masters of the WWE Universe, Finn's tassels are called Terror Tendrils and Finn uses them as weapons. They snap onto his wrists quite easily and look really cool. They're quite dramatic, really, and they're not at all flimsy or fragile feeling. 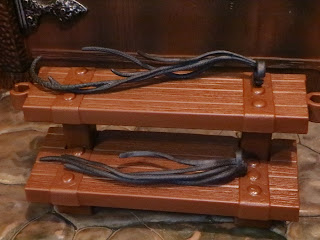 * Finn comes with two pairs of Terror Tendrils: The red ones seen above and the black ones seen to the right. 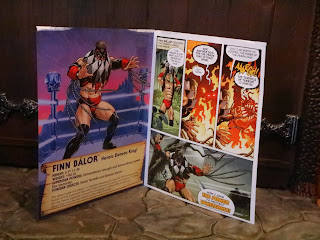 * Behind each standard MOTWWEU release is a minicomic of sorts. It's only 4 pages (cover, bio, comic, and back page with cross sell art) but it looks cool and does offer some cool information on the role of the characters in WWEternia. 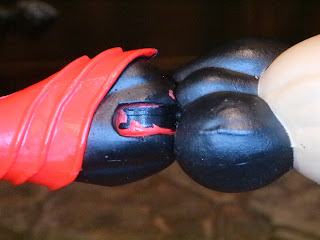 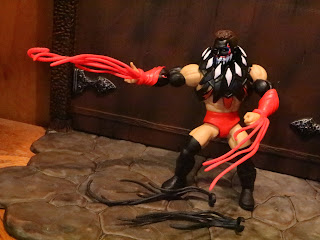 Being a moderate fan of the WWE and a massive fan of Masters of the Universe, Mattel's Masters of the WWE Universe line definitely intrigues me. I'm hoping there are quite a few crossover fans out there too, although thus far it doesn't look like Mattel and Walmart have given the line a big push. That's a real shame as so far I'm very impressed by the quality of these figures. Finn Balor is a Great figure and I really could see MOTUO collectors weaving him in to their collections later this year. This is an interesting line and I'm curious to see how it fares this year, especially with all of the stuff Mattel seemingly has planned for MOTU.

For more figures from Masters of the WWE Universe, check out the following:
Grayskull Mania
Posted by Barbecue17 at 1/02/2020