Action Figure Review: God Skeletor from Masters of the Universe Classics by Super7 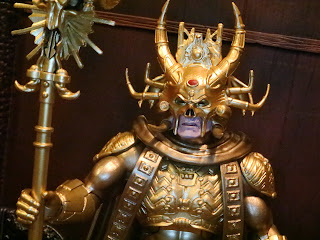 Today's my third review from Super7's final series if Masters of the Universe Classics figures and this time it's God Skeletor! Based on William Stout's design for the 1987 film, God Skeletor represents Skeletor's appearance at the finale of the movie one he is fully imbued with the power of the universe. This is an incredibly popular look for Skeletor that really depicts the character in a way that was never seen before the film or since in other media. It's way outside of Skeletor's normal depictions, but that's part of what makes it so unique and interesting. My guess is that for a lot of collectors, God Skeletor is going to be the hit of the series. Let's take a look and see how he fares as an action figure after the break... 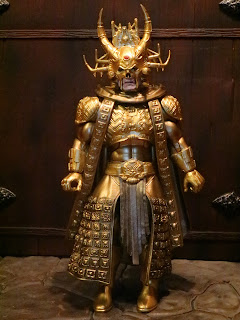 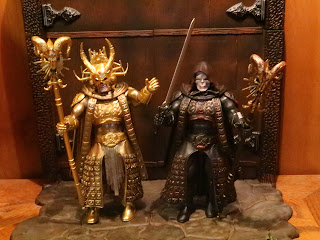 * God Skeletor is largely a repaint of the Dark Despot Skeletor from this same series. That's true to the film, though, and there certainly are some differences, particularly the incredible headsculpt and the new belt buckle piece. 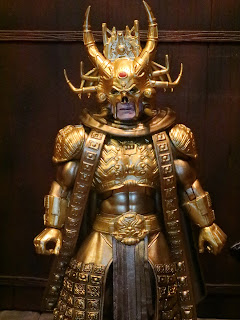 * God Skeletor is an impressive looking figure. Again, the really exciting thing about this figure is the fact that this version of Skeletor looks so different from any other version released. The sculpted bits are all excellent, just like on Dark Despot Skeletor, but here they're given an excellent metallic gold paintjob that really stands out. It's very shiny and looks excellent alongside of other MOTUC figures. 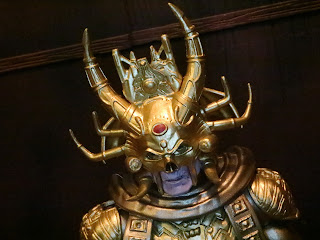 * Skeletor's crowned helmet is stunning. There really is so much going on here, including those crazy cool bat wings in the back and what looks like a castle on the top. The horns are excellently molded with no bending or warping in site. Bravo! 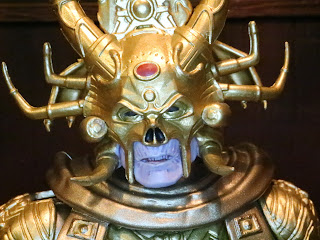 * The headsculpt beneath the helmet is also excellent and really captures Skeletor's terrifying visage in the film. While these are based on Stout's concept art and not the film's actors, you can still kind of "feel" Frank Langella in the sculpt. It's excellent. 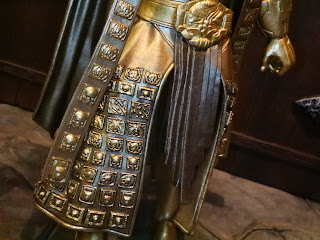 * God Skeletor has the same robe and tassels as Dark Despot Skeletor,which are covered in lots of interesting little designs that look like metal reliefs sewn on to the outfit. The sculpting here is excellent and it's easily some of the most impressive work I've seen from Super7. 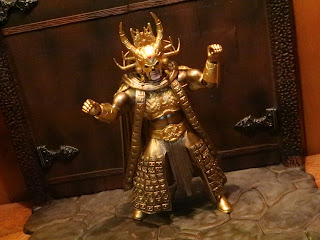 *  SinceGod Skeletor's wearing heavier robes and armor he's not the most poseable figure but he does move as well as most other MOTUC figures with similar designs, plus he's got the swivel/ hinge ankles and wrists that Super7 added to their figures. The plastic quality is great on these release as well, feeling much more in line with Mattel's releases than some of the earlier Super7 figures did. 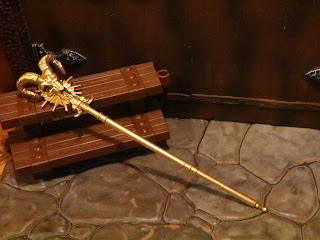 * Skeletor's Havoc Staff is also transformed, and thus it is presented here in gold as well. It's a terrific design that takes the regular Havoc Staff and makes it even more menacing and regal. The gold and black paintwork (there's a bit of dry-brushing on the headpiece) on this is very impressive. 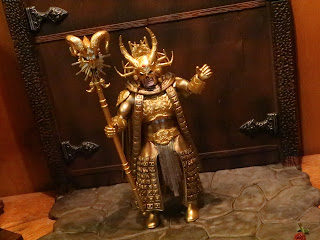 God Skeletor turned out very, very well. Visually, he's probably tied with Commander Karg as being the most impressive figure in the set. Super7 has really stepped up their game again, though sadly it's here at the end of the MOTUC line. These figures did cost $35 dollars, though, which is on the pricier side of standard 6-7 inch action figures. At that price I would have loved to have seen a few more accessories. This guy comes with less stuff than Dark Despot Skeletor! Factoring in the price and such, he's a Good and a 1/2 figure. The figure itself it definitely well worth it but you're definitely playing for the exclusivity of this run.


I've reviewed so many Skeletor/ Keldor items that he has his own review archive. For more Skeletor stuff check out Snake Mountain!