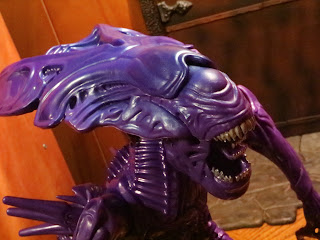 It's no secret that Kenner's vintage Alien and Predator toyline is one of my favorite toylines of all time, and in 2020 I'm hoping to go through and review every figure in the lines. Yes, every figure. We'll see how it goes but I've found that there aren't too many great resources out there for collectors of the line, so I'm going to help how I can. Plus, I love the line so much and I'm in the process of completing it. Of course, my love for that vintage toyline is the reason I'm checking out the subject of today's review: The Alien Queen from Lanard Toys' Alien Collection. Yes, Lanard Toys, the makers of The Corps. Over the past couple of years Lanard has been releasing a few movie based toylines covering properties like Rampage, Kong of Skull Island, and Jumangi. Now they've got the Alien license and they've released an unusual assortment of action figures loosely based on the property. These are all exclusive to Walmart (as is most Lanard product), so that's where you'll need to check to pick these up. My biggest interest in this line is finding pieces that will blend in well with Kenner's vintage Aliens line and I do believe the Alien Queen fits in quite well as sort of a "boss villain" version of the Queen. Let's check her out after the break and see if this is a line worth screaming about... 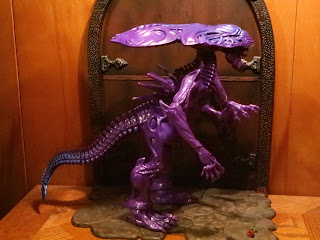 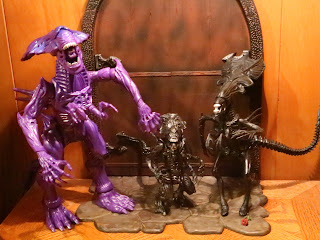 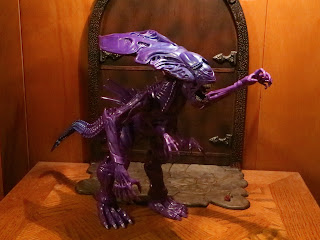 * First things first, the Alien Queen is huge. She comes in a large open front box with some very cool 90s styled art on it. The Queen is 12 inches tall and is a massive, hefty toy. If you picked this up as a gift for a kid's birthday party (so long as the kid likes toys rather than just watching other people play video games on YouTube) then you ought to be the MVP. This thing is just very impressive. 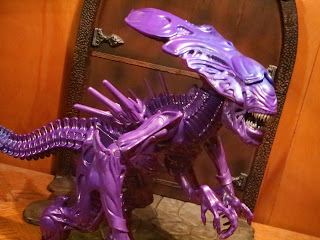 * There is certainly no comparing the sculpt on this with something from NECA, but the sculpt is actually pretty good. It might not be as intricate as some of the Kenner era Aliens sculpts but it's definitely in the same ballpark. I find that to be a good thing because I plan to mix it in with that collection. The purple color is a bit more subdued than my pictures make it out to be, though. In fact, it actually has a purple and blue two-tone paintjob going on, which looks very slick. 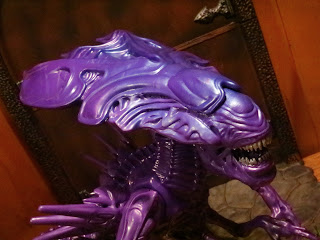 * The headsculpt is terrifying and is probably the best part of the figure. It's very nice with excellent detail and even some nice paintwork on the teeth. The head is long and flat (It's about 8 inches long) and looks pretty accurate for a toy that's clearly marketed towards kids. 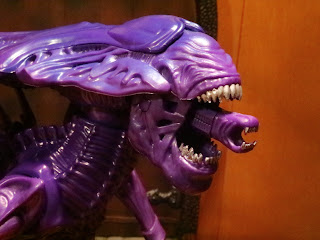 * It has the pop out inner mouth, too. Just push back on the Alien Queen's head and her inner mouth pops out at any unsuspecting Space Marines nearby. 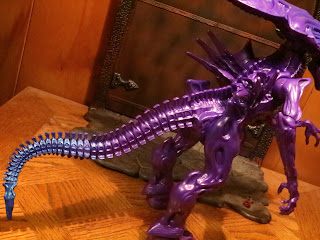 * The Queen's tail comes separate in the package but you just have to pop it on to get her to her full size. The tail and the spiky protrusions on her back are nicely detailed and really add a lot of menace to the toy. 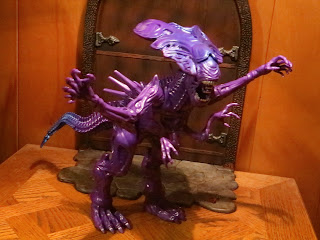 * The articulation isn't bad, either. I mean, you're not going to get crazy, hyper articulated poses but you certainly can have a lot of fun posing the Alien Queen in various ways. I like the swivel/hinge joints in her arms, particularly on the weird little arms coming out of her chest. 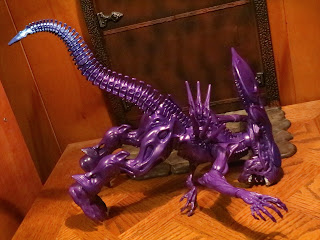 * My only complaint here is that the Queen is a little front heavy and if you lean her forward too far she tends to tip forward. She really does have to stand upright rather than lean forward like a T-Rex. 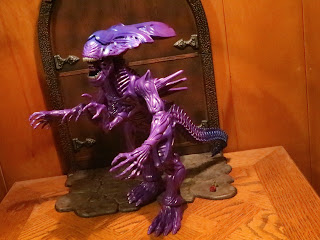 For $20 bucks, the Alien Queen is a massive action figure with a really cool look. Collectors of NECA's Aliens offerings might not care for Lanard's stuff (NECA's is clearly superior) but folks buying toys for their kids or collectors adding pieces to their vintage Kenner collection should take notice. This is a Great Alien Queen that fits in well with the Kenner line. The purple color is a little bolder than most of the Kenner figures but I think it still works. This is the largest and most expensive piece in the Lanard range of product thus far and it's pretty impressive. I'll be reviewing the rest of the series soon, so stay tuned!

If the Alien Queen is your favorite queen, then check out my reviews of the Kenner Alien Queen
and the M.U.S.C.L.E. Alien Queen from Super7.