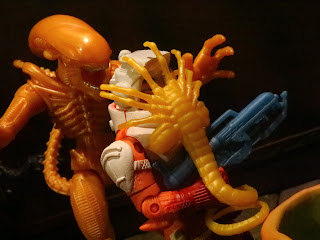 I just reviewed the Alien Queen from Lanard Toys' Alien Collection on Monday and now I;m checking out the first one of the sets including a standard Xenomorph. Most of these sets don't have actual names, which is kind of frustrating to me. Still, I can't help but like this line. I really only picked these up so I can mix in some of the pieces with my beloved Kenner Aliens and Predator collection, but they definitely have a charm of their own that I appreciate. These are very inexpensive, which I think is one of the first things you'll notice about these. This set with a 1/18th scale Xenomorph, a human figure, and an egg with a Facehugger is less than $10 bucks. Yeah, I know. That's crazy. There's obviously a lot of reuse between the sets and the humans are reused from previous Lanard lines like The Corps, so that probably helps keep the costs down. Anyways, let's check this set out and see what you get for $10 bucks, after the break... 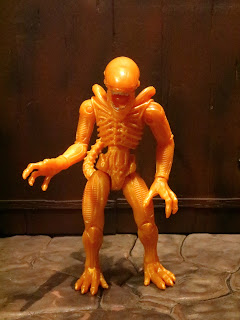 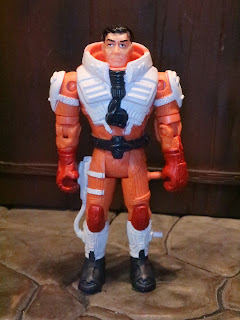 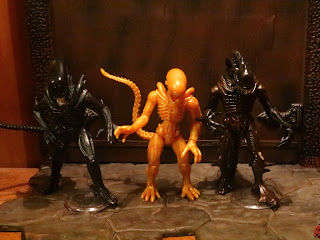 * For all of you who want to see how these merge with the Kenner figures, here's a shot of the Lanard Xenomorph Drone (center) with the Kenner Warrior Alien (left) and the Scorpion Alien (right). Size wise, I think he works OK. Yeah, he's bright gold, but some of the later Aliens: Hive Wars stuff was, too. 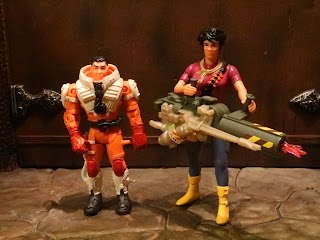 * Here's a shot of the Research Scientist (Left) with Ripley from the Kenner line (right). This guy definitely doesn't fit in scale-wise with the Kenner human figures, so I don't think he'll be going on the shelf. 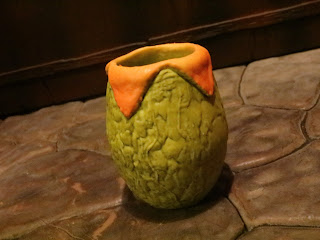 * Maybe the best part of this set is the egg. It's awesome and looks quite detailed. This definitely will fit the Kenner Aliens line quite well. It's hollow inside, too, so you can actually put Facehuggers inside of it. 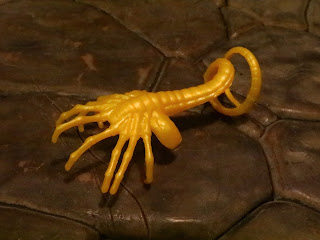 * And this set actually comes with a Facehugger! This yellow Facehugger definitely looks a lot like the Kenner Facehuggers and can either stand up on it's tail, pop out of the egg, or lay prone as if it's crawling around. 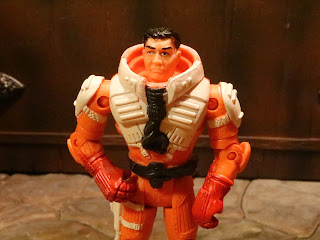 * Here's the Research Scientist. This is definitely a figure that Lanard Toys has released previously though I can't quite identify it. Still, it does work as a generic Research scientist in the Aliens Universe. The bright orange and cream colored suit certainly make this look like someone called in to do cleanup or investigate the presence of a Xenomorph specimen. 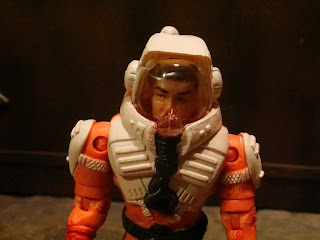 * The Research Scientist has a removable helmet that fits on quite snugly and really completes the look of someone in a futuristic HAZMAT suit. 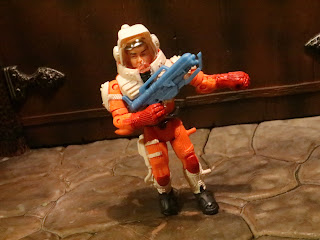 * While he's not as articulated as a 1980s G.I. Joe, the Research Scientist is definitely more articulated than some other 1/18th scale action figures. He has swivel hips, which is limiting, but everything else is pretty mobile with a decent range of movement. 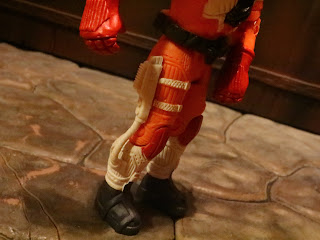 * I really like some of the sculpted details as they absolutely remind me of the Real American Hero G.I. Joe figures. What's this device on the Research Scientist's leg? Some sort of scanning or tracking device? It definitely adds something cool to the sculpt of the figure despite and feels like it belongs in the Aliens universe. 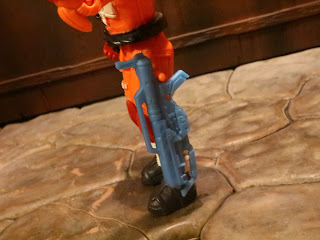 * The figure has some oddly placed pegs on his left leg which can hold the flamethrower. Pretty cool, right? 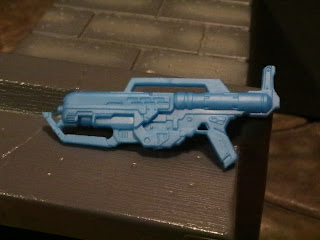 * The Flamethrower is a nifty weapon with a really nice sculpt. I think some of these weapons might be new sculpts. This accessory is very crisp and clean and fits the figure quite well. 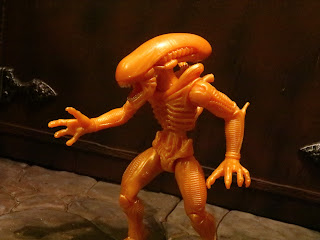 * Let's get on to the Xenomorph, who is the real star of the show. This is an incredible sculpt and while I'd love to see it one day cast in black and dark blue plastic, for now it even looks awesome in gold. It definitely fits in with the Kenner stuff well, particularly some of the later variants with unusual colors. The sculpt is excellent and really shows off the quality of work that Lanard is capable of. 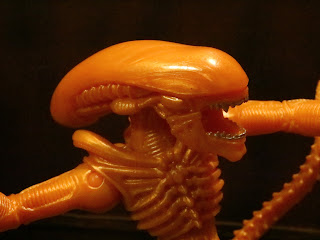 * That's a fantastic Xenomorph headsculpt. Doesn't this guy look fierce? The mouth is sculpted open (it doesn't move or close) and the proportions seem spot on. 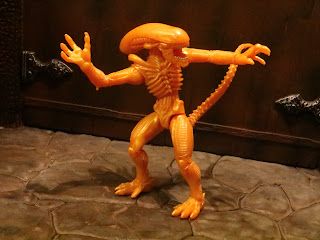 * The Xenomorph is very well articulated and ends up being a really fun figure to mess around with. He's quite dynamic, really. 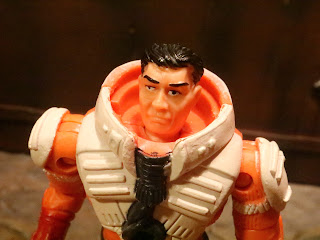 * When you get up close you do realize that some of the figures look better than others. The Research Scientist isn't terrible, but you can definitely tell that this is a "bargain" figure. 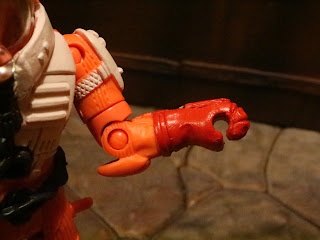 * Why is the figure's hand posed at such a weird angle. Maybe he's from a set where he drove a vehicle, but that's not the case here. It just looks awkward in person. 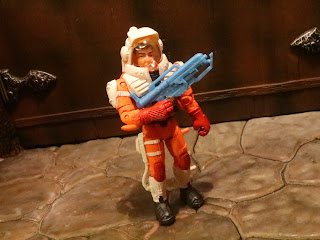 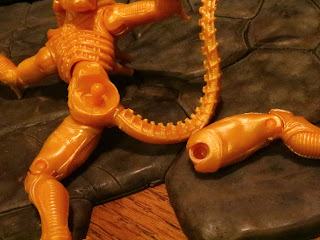 * They go back on, but be careful of the Xenomorph Drone's hips. They tend to pop off quite easily if you're trying to move his legs too much. 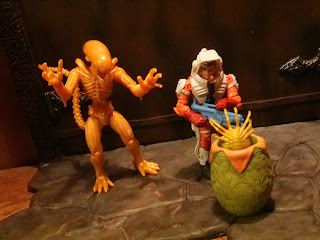 For $10 dollars, Lanard really is offering up a lot in this set. If you're buying this set for a kid, it's a pretty cool set with a lot of play value. If you're buying it to complement your Kenner Alien Collection, the Xenomorph, Facehugger, and the egg will go great. Even with just those three items, there is definitely $10 worth of value here. This is a Great set that is just plain fun. I really am curious to see if Lanard Toys has success with these and continues with the license in the future. They could definitely have a good run for sure.


For more Xenomorphs, check out my reviews of the M.U.S.C.L.E. Xenomorph from Alien Pack A, the Attack Alien from Pack C, the Xenomorph Warrior from Aliens Pack A, the Alien Warrior (with open mouth) from Pack B, and the Alien Warrior (Crouching) from Pack C, the ReAction Alien (with Metallic Flesh), NECA's Xenomorph Warrior, the standard Xenomorph from Kenner's Alien versus Predator 2 pack as well as the Bull Alien, Gorilla Alien, and Scorpion Alien, the Loyal Subjects' Xenomorph (Black Battle Damaged) and Xenomorph (Ice Blue Metallic), and the Micro Machines Alien Transforming Playset which is loaded with Xenomorphs.

For more Facehuggers, check out the Facehuggers included with the Bull Alien, Gorilla Alien, and Scorpion Alien in the Kenner line.

This is the first Research Scientist I've reviewed. For more Alien Collection figures, check out the following:
Alien Queen
Posted by Barbecue17 at 1/29/2020