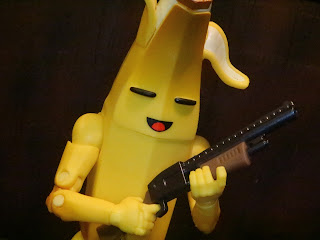 Getting some fruit for Christmas is an old tradition that hearkens back to the gifts of St. Nicholas, the Bishop of Myra. I got some fruit for Christmas, too. A banana. And he's carrying a flipping 12 gauge. Rack it! Yes, I actually received Peely from Jazwares' Fortnite: Legendary series for Christmas and today I'm checking him out! He's crazy, as are so many of the Fortnite designs, but he's so darn loveable, too. Jazwares has released Peely in the smaller 1/18th scaled line while McFarlane Toys has released him in their 7-8 inch line, so there is a Peely no matter what size you prefer. The Fortnite: Legendary Series version is the only one to come with multiple faces, however, so that's a big point in his favor. Let's check out Peely after the break and see why he's the top banana. 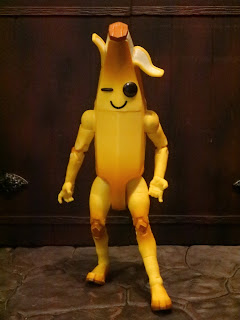 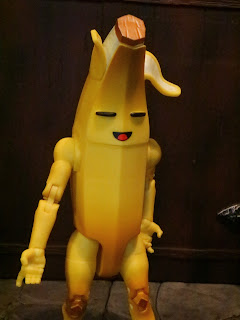 * Peely is a giant, anthropomorphic banana. Seriously, he's a human sized banana with arms and legs and a face. He's an odd looking character but that seems to come with the territory for so many of the Fortnite characters, doesn't it? The first series of figures featured lots of more traditional action characters but the most recent series has really gone off the deep and I like it. I like the more traditional looking guys, too, but I really can't turn down a gun wielding banana. Remember Sgt. Bananas from Teenage Mutant Ninja Turtles? Imagine him teaming up with Peely! 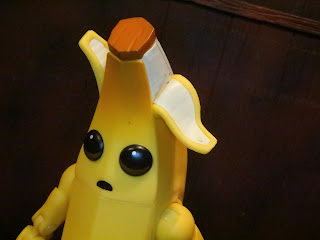 * Peely doesn't have a head like most of the other figures in the line. Instead, he has a face near the top of his banana body. He's starting to peel a little bit, which looks pretty cool, and he's got a crazy, wide eyed expressions. He's seen things, man! The whole top front of the peel is a swappable face, so you can give Peely one of three different looks. 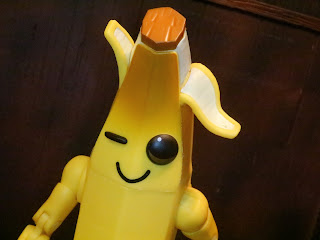 * He also has a more pleasant winking look. Look how happy he is! He's winking at you! 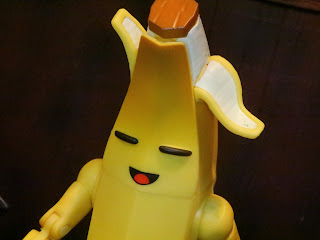 * Gosh, he sure looks content, doesn't he? Peely really looks like some sort of mascot for a Japanese snack food. He's very anime. I think. I'm not terribly up on my anime, but I think he kind of has an anime vibe. 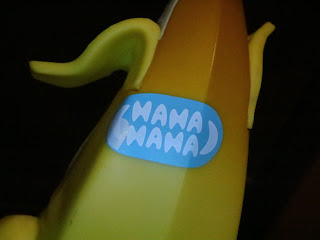 * You know how various fruits often have a stick on them to show the grower's brand? Well, Peely has one, too. He's a "Nana Nana" branded banana. 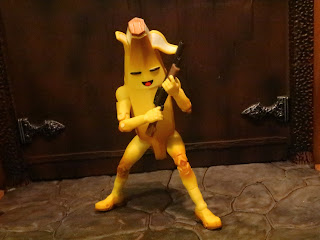 * While Peely doesn't have a much articulation as most other figures in the line he's still incredibly poseable. He lacks the waist, mid-torso, and head/neck joints because he doesn't really have a waist, a torso, or a head/neck. I can practically guarantee that this will be the most well articulated action figure of a banana in your toy collection. I hope so, anyways. 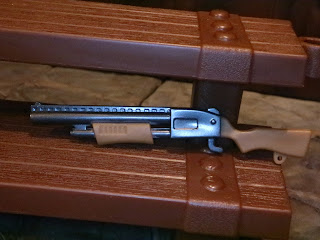 * Peely has some great accessories and first up is the Pump Shotgun, which is modeled after the Common, Uncommon, and Rare versions of the weapon. It's a pretty standard shotgun design although it certainly has the boxy look to it that most of the Fortnite weapons seem to have. This one of my favorites. Peely looks great holding it (although it's tough to pose him in a great firing position) and the weapon is nicely designed with gunmetal and wood finishes. 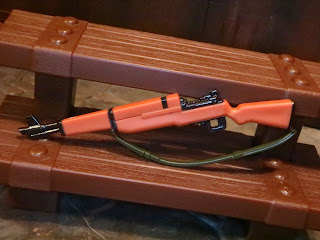 * The Infantry Rifle looks like a classic M1 Garand rifle with an iron sight and a sling, allowing Peely to tote it around on his shoulder. 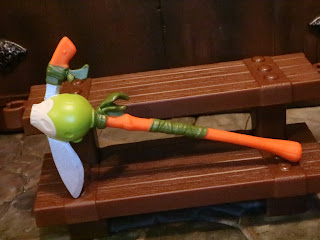 * Peely's Harvesting Tool is called the Machete and it looks like a machete wedged into a ...coconut of some sort? Is that what that is supposed to be at the top? I'm not sure. It's a really cool piece (the machete isn't removable, though it looks like it could be) and fits Peely quite well. * Peely's backpack is a canvas jungle pack with a canteen on the side and three bananas in reserve. So...does he eat bananas? 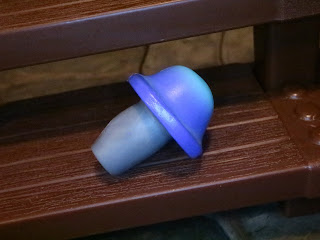 * Why does Peely come with a huge mushroom? It turns out that you can find these in the game and eat them to increase the power of your shield. I would imagine that you would eat them in the game and start seeing giant bananas running around with shotguns. There's actually a hole in the side of the mushroom that Peely's thumb can fit into, allowing him to hold it better. 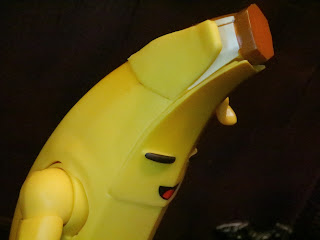 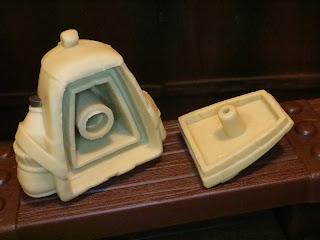 * The backpack isn't supposed to come apart, but it does. The part that attaches to Peely's back fits well but the pack itself is loose. Maybe my figure's accessory is just missing some glue? Does everyone else's fall apart, too? 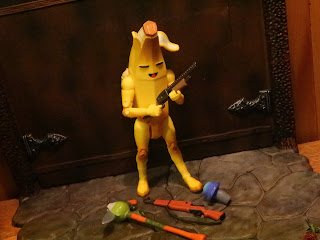 While Peely definitely has one or two flaws (fruit's a gamble!), overall he's of a similar quality to the rest of the figures in the line. Crazy, fun design, solid articulation, and lots of cool accessories. The Fortnite: Legendary Series really seems to be flying off of shelves. I'm very curious to see how Jazwares capitalizes on the success of this line as it definitely seems like one of the most exciting mass market lines in recent memory. It seems they have a limitless amount of character "skins" to utilize, so hopefully we keep getting more and more fun stuff. Peely is a Great and a 1/2 figure and another worthy addition to the line.