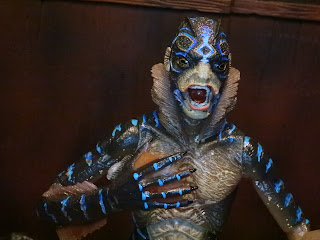 Today I'm checking out the fifth releases in NECA's Guillermo del Toro Signature Collection: The Amphibian Man from 2017's The Shape of Water. The Shape of Water isn't my favorite del Toro film but there's no denying that it's a very good movie, it garnered some serious attention (and won the Academy Award for Best Picture, Best Director, Best Production Design, and Best Original Score), and it had some great performances. Doug Jones portrayed the Amphibian Man, who looks like a cross between the Creature from the Black Lagoon and Abe Sapien from Hellboy. I really wanted this guy to be part of The Scream of 31 Days of Toy Terror but he arrived to me very late in October and I just had too many other things lined up. While last year's sole release was Santi from The Devil's Backbone, all of this year's releases thus far have been from Pan's Labyrinth, so getting a character from another film is a nice change of pace. Let's check out the Amphibian Man after the break and see what magic NECA has worked this time around... 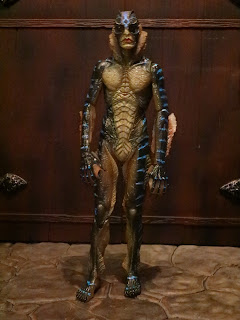 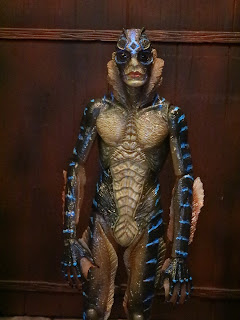 
* The Amphibian Man has one of the most amazing sculpts I've seen this year. Heck, it's probably one of the best sculpts in my collection. It's very realistic and looks very true to the film. The build is perfect and everything about the paintwork and the design feels very otherworldly. I love the bright blue details set against the darker greens, blacks, and pale yellows of the Amphibian Man's body. When it comes to sculpting movie based figures that focus on realism and detail, no one is doing what NECA is doing right now. 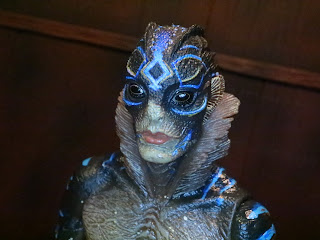 * The Amphibian Man comes with two headsculpts, the first of which is the a standard headsculpt. The Amphibian Man, when not being harassed by the government agents holding him captive, typically has a very charming, very curious expression on his face, which NECA has beautifully captured here. The various fins on the side of the head and neck are made from a softer plastic and the paintwork is very intense and very life-like. 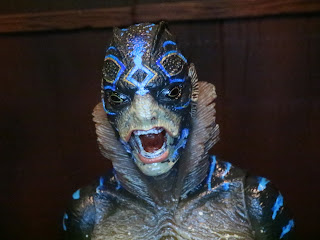 * The second headsculpt shows an enraged Amphibian Man. Not only are his eyes smaller, as if he's in the middle of a snarl, but his jaw is hinged, allowing him to go from being just angry to being outright intimidating. 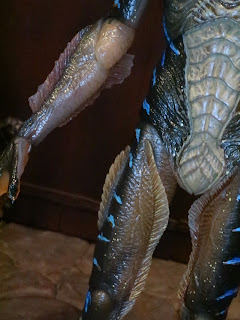 * One of the best things about this figure is that NECA used a translucent plastic to give the Amphibian Man his otherworldly, sea creature vibe. His limbs actually look like they're wet and his skin appears like it is very thin and see-through. It's a brilliant effect that's even more impressive in hand than in pictures. 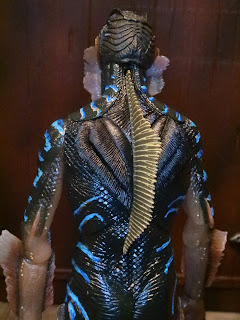 * Not only does the excellent paintwork and sculpting continue on the figure's back but the fins and ridges on his back look incredible. Seriously, the feel so weird (they're made from a softer, rather pliable plastic) and they add so much to the figure's charm. This guy is just an amazing example of action figure crafting. 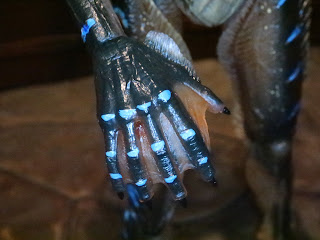 * That incredible craftsmanship even extends to the Amphibian man's hands, which have excellent paintwork and translucent plastic. This, of course, gives his webbed hands an incredibly realistic look. 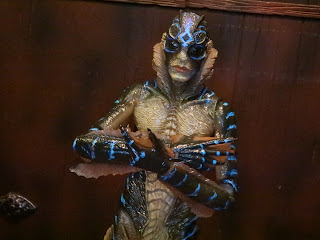 * The Amphibian Man comes with two sets of arms. Two are in a more relaxed position while the other two are designed for swimming or perhaps even fighting poses. The arms actually swap out at the elbows, so the fins on the arms are posed a little differently as well. I suppose you could even swap the hands around, too, giving yourself more combinations for display. 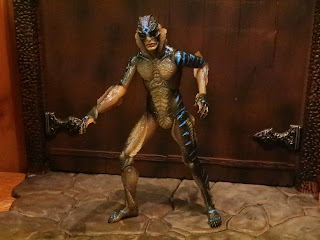 * While he's probably not going to be doing karate anytime soon, the Amphibian Man is still extremely well articulated. The head and shoulders/ hips have a great range of motion while the limbs have double hinged knees and elbows. Amphibian Man is a sturdy feeling figure, so this guy shouldn't give you any trouble when you're posing him for display on your shelf. Heck, some of you might want to play with him in the bathtub. Just don't get water everywhere! 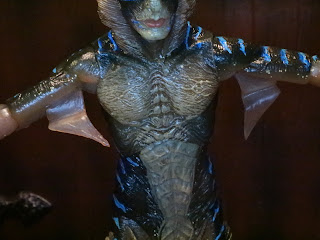 * The figure comes with two little translucent pieces that took me a bit to figure out: They're intended to go under Amphibian Man's arms when they're raised up. That's a pretty minor detail but NECA noticed it and found a way to include it. Nice! 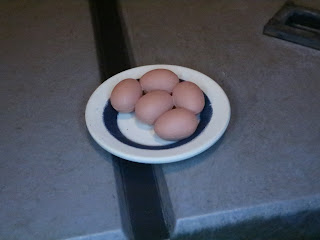 * Guess what else the Amphibian Man comes with? A plate of the hardboiled eggs that Elisa brings him! What a cool accessory, huh? They're not removable (imagine trying to keep track of these!) but they look like separate, individual eggs. That's a pretty unique accessory in my book! 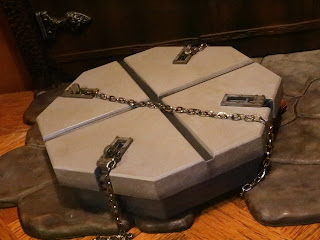 * The Amphibian Man's largest accessory is the base he is sometimes chained to in the secret government laboratory. It's a fairly large base, large enough for the figure to kneel down on it, and it features three chains which can hold the figure in place. It has a few paint applications on it that give it an aged, uncared for appearance. 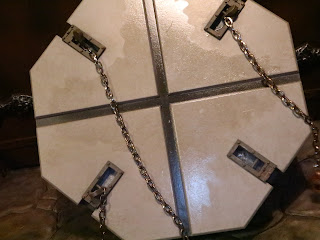 * If you look at the base (it's tough to see in some pictures) you'll notice that it actually looks like it's wet across the top. NECA has used some sort of glossy paint to give the base the look of being covered with a thin layer of water, presumable what has dripped off of the Amphibian Man's body. 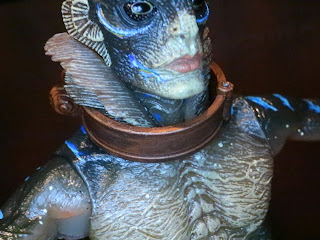 * The neck collar actually opens at the clasp and features a working hinge. It can attach to the larger chain or it can be worn on it's own. It looks really impressive! 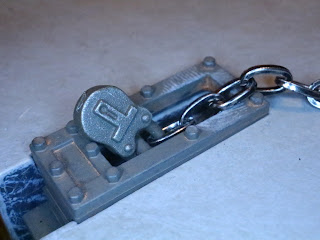 * At the base of each chain is a really cool little sculpted lock. It is a separate piece, though it's attached to the chain and base permanently. 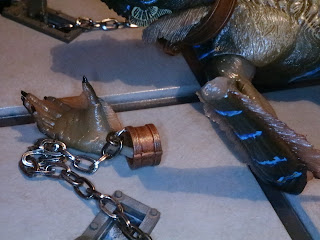 * The only problem I've had with this figure is getting the wrist cuffs on the Amphibian Man's hands. The fins on his forearms make it impossible to do this. Am I doing it wrong? Am I missing something? Let me know! 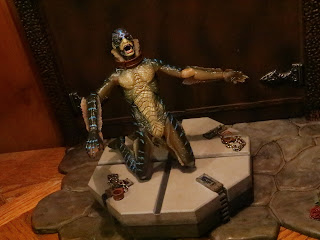 The Guillermo del Toro Signature Collection definitely feels like a labor of love. NECA has released some of the best figures they've ever released, all with amazing accessories. You have to guess that the market for these is much smaller than for Predator, Aliens, and horror icons like Jason and Freddy, so clearly NECA is doing this because of their love of del Toro's films and to make some incredible product for fans. The Amphibian Man is an Epic figure that definitely should stand out as one of the year's top releases. Even if you're not a fan of the film, if you're a fan of cool creature and monster designs this guy should be on your list!