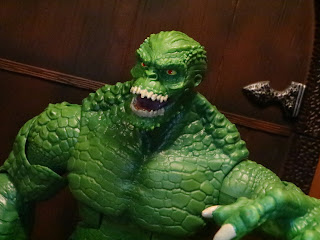 Mattel previously released Killer Croc as a Collect & Connect figure in the DC Comics Multiverse line, but that figure was based on the Suicide Squad film version of the character. It also just wasn't very good. Prior to that, the last comic based Killer Croc in this scale and style was back in 2005 in the D Superheroes line. Croc was due for an update and this one is a massive version that looks incredibly fearsome. Most of the last series of DC Comics Multiverse figures is worth picking up on their own but, when you factor in this sweet Killer Croc, you really have a reason to pick everyone else up. I haven't completed a Build-a-Figure this year that I can recall, but this guy had me very excited. Let's check out Killer Croc after the break... 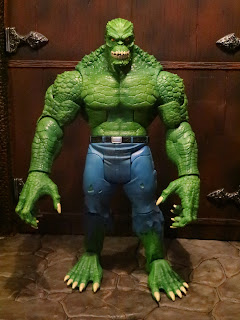 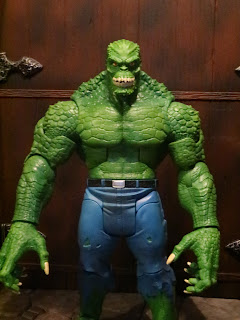 * Killer Croc is big. Seriously, he's a big, bulky guy and is definitely one of the larger Collect & Connect figures from Mattel. He's in the size range with others like Solomon Grundy, Chemo, and King Shark (whom he shares a waist and thighs with). The sculpt and paintwork is excellent here and he looks absolutely menacing compared with the other figures in the line. 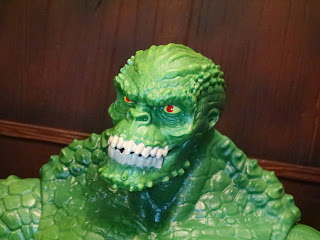 * The portrait is fantastic, showing off some impressive sculpted detail on the various ridges covering Waylon Jones' head. The eyes are also excellent. They're very, very intense and very, very creepy! 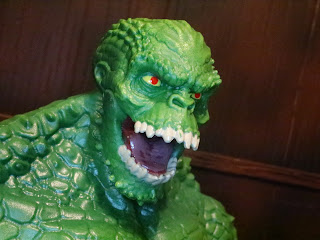 * Croc features an opening jaw that not only gives him more display options but it also helps to add more emotion to him when you're posing him. Croc's open mouth looks great and the work on the teeth is top notch. 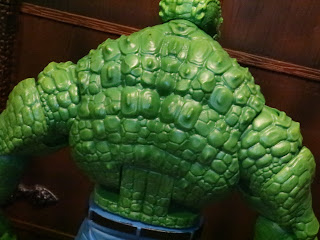 * Here's a shot of the detail on Croc's back. This is some truly nice work and, again, it's a shame that Mattel is putting out DC product of this caliber here at the end of their tenure with the license (at least the adult collector and boy's action parts of it; apparently they can still make items aimed at girls and the pre-school items, like Imaginext stuff). 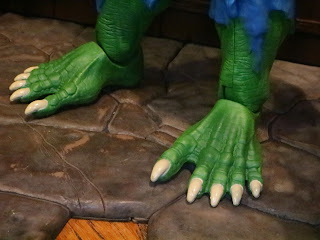 * Killer Croc has all new clawed hands and feet that show off his animalistic nature. He also has improved wrist and ankle articulation here, too. 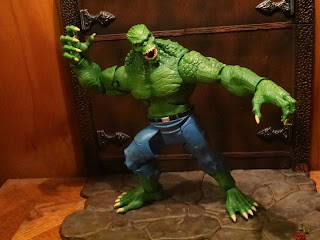 * Croc possibly sports the best articulation we've seen on one of Mattel's Collect & Connect figures. He's built quite like a DC Universe Classics figure but he also has the swivel/ hinge wrists and ankles that have been added to the line recently. He's durable, poseable, and he fits together well. 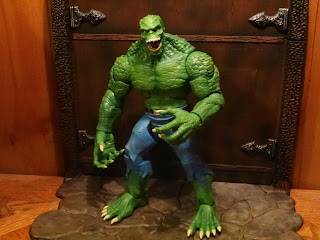 If you pick him up on his own you might pay $60-$80 on the secondary market at this point. If you pick up the entire series, though, you'll end up with 6 pretty solid Batman-themed DC figures and a massive Killer Croc. He really is one of Mattel's best C&C figures and ends up being a Great and a 1/2 figure. He looks awesome, has great articulation, and is an excellent depiction of the character. This guy isn't a disappointment at all. While I'm sad that this might be the last "new" DC figure from Mattel that I review, looking at my many shelves of product they've released over the years I'm quite happier with Mattel's offerings than with anyone else's so far. I fear that McFarlane's DC Comics offerings won't appeal to me the same way that Mattel's have, but I'm always ready to be pleasantly surprised.