Re-Halloween Special: Harold #846 from Scary Stories to Tell in the Dark from POP! Movies by Funko 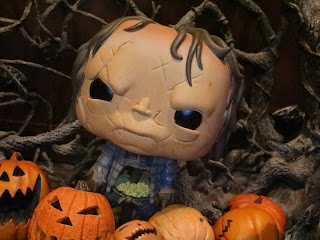 Happy Re-Halloween! Today I'm checking out something really cool that I didn't know existed until I stumbled upon it at my local GameStop last Friday: A Scary Stories to Tell in the Dark POP! vinyl of Harold the scarecrow! I've been a fan (and afraid) of Alvin Schwartz's terrifying trilogy of scary stories for nearly as long as I can remember and I was really, really excited for the film released a couple of months back. While it didn't perfectly capture the sheer unquantifiable terror of the books or, more aptly, the unsettling and indescribable illustrations of Stephen Gammell, I thought it was a pretty good movie. It's a scary film that still manages to be fun. It kind of reminded me of a cross between the Goosebumps film, Trick 'R Treat, and The Ring. The film did a pretty good job of taking elements from the stories and bringing them together in one plot line. While the story "Harold" from the Scary Stories 3: More Tales to Chill Your Bones is quite different from the film's segment featuring the character, the character is still pretty recognizable. This works on so many levels as it's a figure from the movie, the book, and also just a cool looking evil scarecrow. What a time we live in, right? I mean, who would have ever thought we would have toys based on Scary Stories to Tell in the Dark? Let's check out Harold on this wonderful Re-Halloween... 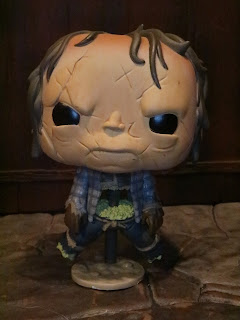 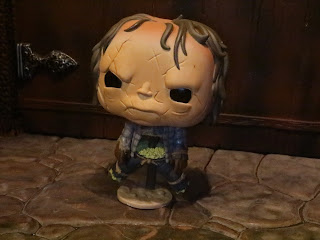 * One of the things that I really like about this figure is that he's actually built like a scarecrow. Harold is mounted on a small base with a large "wooden" rod attached that runs up his back. The figure is, thus, kind of hanging on the rod, just like a real scarecrow might. It's cool and I can't think of another POP! vinyl I've seen mounted like this. 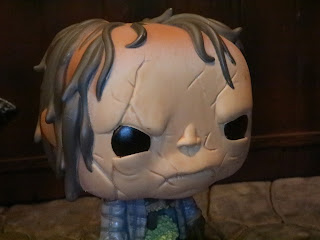 * The face is pretty freaky. It's a good approximation of the movie version's face and, looking at the original art, it's not too far off from that version, either. It's very unsettling. I simultaneously want more Scary Stories to Tell in the Dark POP! vinyls and dread the though of how a little shelf of these guys would make me feel. 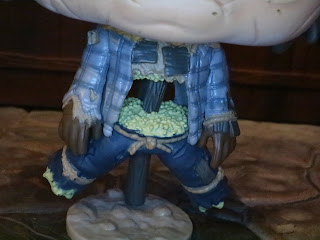 * The insides of Harold look great! The movie version of Harold is split apart in the middle and you can see right through him. Funko did a great job here. All of the details, including the work on Harold's clothes, are really nicely done.

* Like most other POP! vinyls, Harold can swivel his head. Yup. He's definitely watching you. Ooooooohhhh!!!! 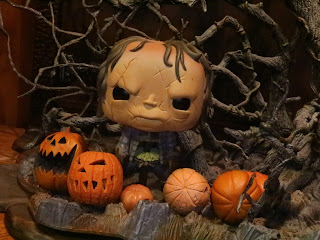 This is definitely the...second creepiest POP! vinyl I own (Twisty from American Horror Story is just a bit freakier) and I love how unique it is. It's also a really cool piece for my horror literature collection. I keep all of my horror books on a few bookshelves in the corner of my study and that's where I keep all of my horror POP! vinyls for some reason. I think it's because one of my first horror POP! vinyls was the Tim Curry Pennywise, so I placed him near my Stephen King novels. Scary Stories to Tell in the Dark really got me into horror as a kid, though, so Harold is getting a place on the shelf next to other legends. He's a Great POP! vinyl and well worth tracking down for fans of either the book or the movie.

This is the first figure of Harold I've reviewed. For more POP! Movie figures, check out the following:
Danny Torrance #458 from The Shining
Dr. Ian Malcom #552 from Jurassic Park
Gage & Church #729 from Pet Sematary
Jack Torrance #456 from The Shining
Michael Myers #03 from Halloween
Norman Bates #466 from Psycho
Pennywise #55 from It
Pennywise (with Beaver Hat) #779 from It: Chapter Two
Sam #57 from Trick 'r Treat
Posted by Barbecue17 at 11/07/2019