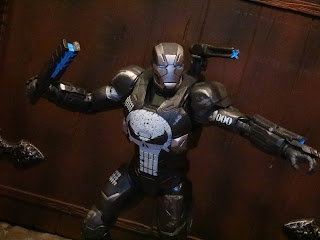 Back when I picked up the Fan Channel Exclusive Punisher from GameStop, I also grabbed this very cool Punisher: War Machine. This is only the third Marvel Legends figure I've purchased this year but, for some reason, I always pick up Punisher figures. This one is very different, though, as it's Frank Castle's version of the War Machine armor. I really don't keep up with Marvel comics so from what I've picked up, Nick Fury offers Frank Castle the War Machine armor so he can take his war on crime to the next level. I've seen the prop replica helmet for this armor before, so I knew it was a thing, but I didn't know much about the storyline. Well, I really still don't to be honest. It's just a cool looking figure that I knew I needed to pick up. Ready to check it out? Then join me after the break... 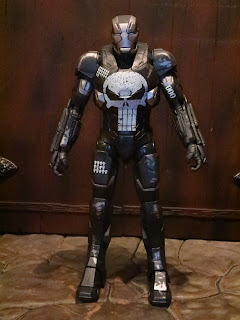 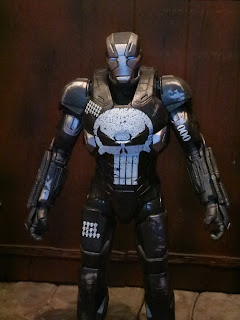 * Since the War Machine armor is usually grey, black, and silver, Frank's version of it doesn't look terribly different. It does, however, still look pretty impressive and has a giant skull on the front. I'm sure this is mostly a repaint of a previously released War Machine figure but I honestly don't recognize it off hand. 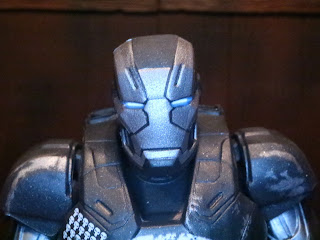 * The helmet doesn't look too different than a normal War Machine helmet, though the sculpt is still good. Looking at some art from the book, this definitely seems to be an excellent recreation of Frank's armor. The sides of the helmet look inset quite a bit, like the sides of a skull; I wonder if that's intentional? 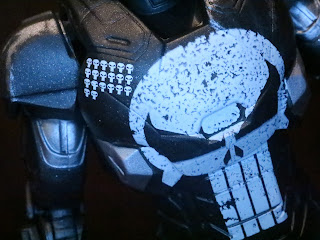 * The front of the armor is wicked looking. I not only love the giant skull on the front but also the skull "tally marks" on the chest panel and on the right thigh. Keeping track of his confirmed kills seems like a very Punisher thing to do, though I'm only seeing 33 on here. I'm guessing he refreshed the paint on these because 33 doesn't seem like much of an ongoing record for the Punisher. More like a slow Tuesday, really. 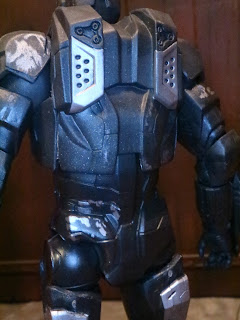 * The paintwork on the armor is pretty good as there are a lot of uneven scuffs and scrapes across the armor, showing the metallic surface underneath the black paint. I can imagine that Tony Stark is pretty fussy with his armor and constantly repaints things after an encounter. Frank Castle, not so much. I imagine he likes the "battle scars" that show up on this armor. 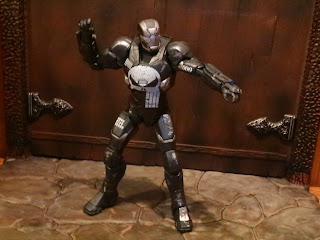 * While there are some limitations on mobility inherent in the armor design (ankles, shoulders pads, and the hips), overall this guy still moves really well. He's very fun, as you'd expect from an armored figure, and has the same great quality that Hasbro has made part of the Marvel Legends line. 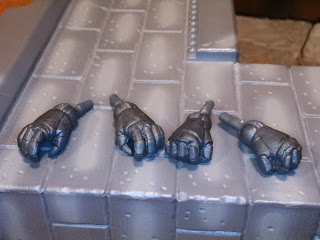 * The Punisher comes with two sets of hands: A set of fists and a set of grips. They swap out easily and give you a couple options for posing. 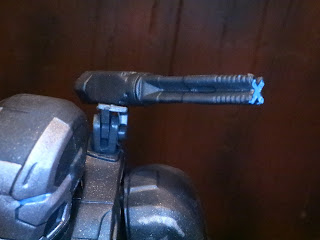 * Alright! Let's get to the armaments on this armor! Frank comes with a ton of stuff, and first up is this articulated cannon for his left shoulder. It plugs into a hole on the left shoulder and features a hinge and a swivel, allowing the cannon to rotate around and track its targets. It also has a blue tip, which I'm assuming means it fires repulsor bursts. 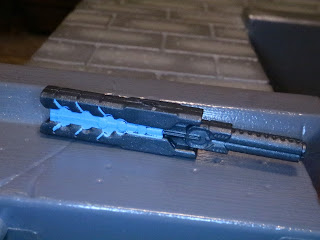 * The second weapon is this thing, which looks like a melee bug zapper. Honestly, it seems like some sort of charged stun weapon, probably for up close encounters or dealing with targets that Frank doesn't need to eliminate but still needs to subdue. He can hold this in either of his gripping hands. 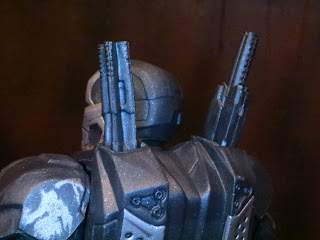 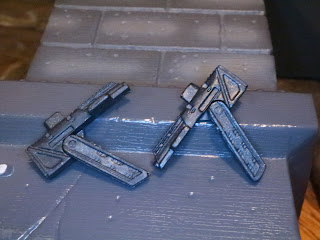 * Lastly, the Punisher comes with two guns. The magazines on these are hinged and pull down. I first thought they were little pistols but they actually attach to the armor. 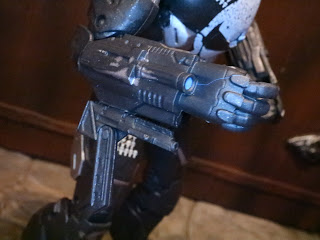 * The guns attach to the forearms of the armor, which already looks they're covered with weapons. The magazines unfold and these bad boys are ready to rock. 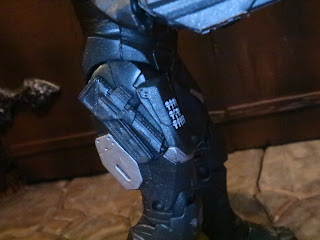 * For storage, the guns fold up and fit into the side of the War Machine armor's hips. It's cool how everything stores on the armor, but can pop out to instantly arm Frank! 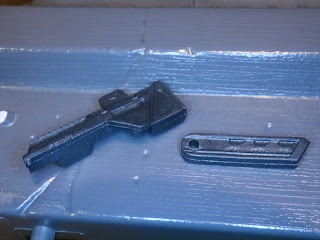 * My only real complaint here is that the magazine hinges do tend to be a little loose. I have one of mine that tends to fall apart when I'm changing it's position. Be careful! 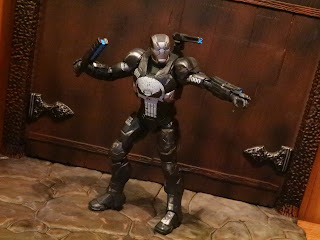 This guy turned out to be a really impressive figure. Seriously, considering this guy can be had for around $20 dollars, you're really getting a lot of cool little features and an impressive armored figure. Maybe it doesn't have a many extras or the extreme range of motion as many import figures but overall, I feel like Hasbro is definitely closing the gap between their offerings and many of the prestige import offerings from various companies. This guy is an Epic figure and definitely something a bit more unusual so far as Punisher figures go.

If you need more Punisher reviews, I've also looked at the standard One:12 Collective Punisher, the Punisher: Fully Loaded, the Marvel Legends Series Walgreen's exclusive The Punisher and the Fan Channel The Punisher.