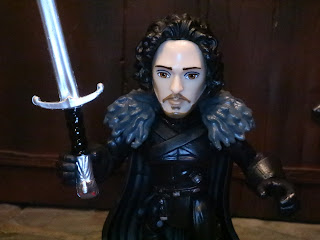 Recently The Loyal Subjects reached out to me and sent me a box of various Action Vinyls to review. The holiday season is quickly approaching (Black Friday is coming!) and folks are always looking for stocking stuffers. These little articulated minifigures from The Loyal Subjects definitely make a pretty good gift for someone in your life who loves Game of Thrones and collects toys, but they also make a pretty good gift for someone who is not out there hunting down Game of Thrones action figures but who very well might display a trinket on their desk. While I have admittedly only watched Game of Thrones into the third season (I have read all of the books, though-🤓) I know who Jon Snow is, and I know that he knows nothing. The Loyal Subjects has at least four Jon Snows out there, but you're only going to find a few of them as one is a Club 28 version (they only made 28 of him) while the other is gold, and there is only one of him. Dang! (There's also a SDCC exclusive Jon Snow Betrayed for sale on their website.) This guy is your standard, garden variety Jon Snow and he comes packed 2 to a case of 12. Let's check him out after the break... 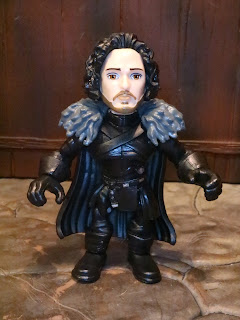 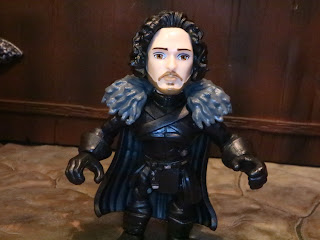 * I've reviewed plenty of Action Vinyls, but they've all been from the Masters of the Universe line. The Game of Thrones figures are a little bit less caricatured than those and should easily be recognizable to anyone with a passing familiarity with the show. Jon's decked out in black, has his cape with a big, fuzzy collar, and looks like he's ready for business. 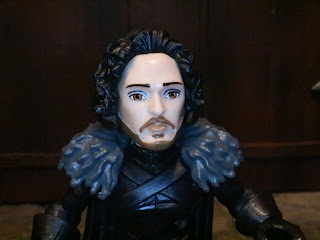 * The headsculpt isn't bad. It kind of reminds me of a cross between a traditional action figure and a slightly caricatured figure like Funko's Rock Candy or something. The paint work on the face is neat and clean and there's a nice amount of detail in the hair. 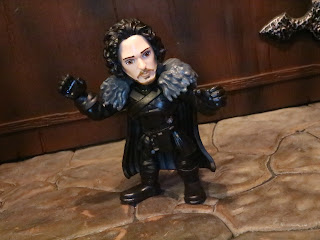 * The Loyal Subjects really have added a lot of articulation into these figures and while not every joint has a great range of motion, there still is enough articulation to have fun with these. You can get some cool poses or just fiddle around with Jon if you're on a boring conference call or something. He's pretty sturdy! 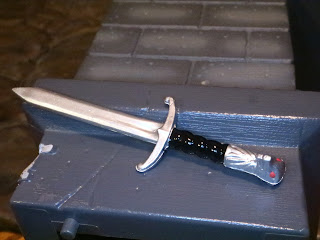 * Jon comes with his sword, Longclaw. It's a big Valyrian steel sword with a direwolf on the pommel. I like the little red eyes! 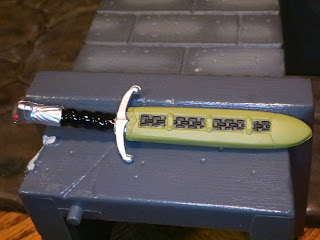 * Jon Snow also has a sheathe for his sword that clips onto his hip. It has some ornate detailing on the side and it holds the sword perfectly. 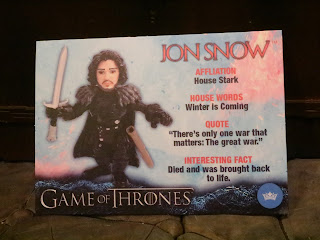 * To add a bit more personalization and fun to each release The Loyal Subjects adds a bio card. It's a cool little extra that features a few little details about Jon Snow as well as a picture of all of the figures in the series. 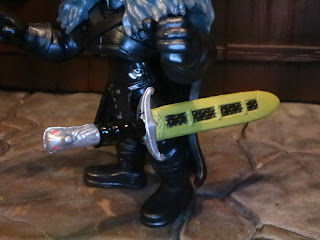 
* Keeping Jon Snow's sheathe on his hip is a bit difficult. It's not the tightest fit and Jon's cape tends to knock it out of place. 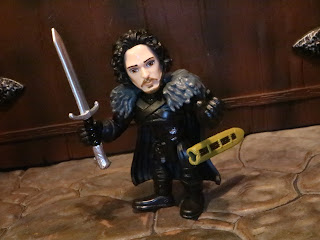 This is a pretty cool miniature action figure of John Snow. He's got a couple of nice accessories, quite a bit of articulation for a figure of this size, and a really nice sculpt. He's a pretty Great little figure and definitely should appeal to the GoT fan in your life. The Loyal Subjects has a retailer list, so check that out to pick some of these up. They're quite cool and they're really getting into more and more licenses, including Street Fighter, Ghostbusters, and some random cartoon characters including some King of the Hill stuff!


This is actually the first figure of Jon Snow I've reviewed!


The subject of this review was provided to me free of charge by The Loyal Subjects!